Glow discharges of various kinds have long been of interest to man, no doubt evoking a great deal of wonder in times past.

The forms of discharge are so varied that it was only during the twentieth century that they were shown to be different aspects of the same basic physical phenomenon: In every form, the glow discharge is a manifestation of the conduction of electricity through gases.

One form occurring in nature is the faint glow known as St. Elmo’s fire, seen at the top of ships’ masts at night when thunderclouds are near, named corona after the Latin for crown.

St. Elmo’s Fire  Physically, St. Elmo’s fire is a bright blue or violet glow, appearing like fire in some circumstances, from tall, sharply pointed structures such as lightning rods, masts, spires and chimneys, and on aircraft wings. St. Elmo’s fire can also appear on leaves, grass, and even at the tips of cattle horns. Often accompanying the glow is a distinct hissing or buzzing sound. It is sometimes confused with ball lightning.  — Wikipedia

In our generation, we all have grown up in the midst of electrical technology. We have no difficulty distinguishing luminous electrical phenomena from the chemical luminosity of fire. But suppose that electricity were unknown except through its natural manifestations. How would ancient man have described a corona discharge? Most certainly as fire—the process of combustion.

Atmospheric electric fields are commonplace; however, various ancient descriptions of strange fire suggest that in the past these fields achieved magnitudes far greater than is usual today. As one possible cause, Immanuel Velikovsky postulated an electrical discharge from the ionosphere to the earth as a result of a localized increase in ionospheric charge. A tremendous electric field, resulting from the charge, would have preceded such a discharge. Destructive manifestations did not always result, but extraordinary fields nevertheless could announce their presence through the less violent corona.

These and related natural electrical phenomena seem to explain a number of otherwise mysterious events recorded in the Old Testament. 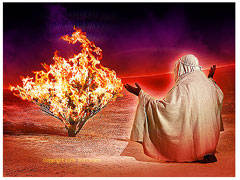 In Exodus 3:2 & 4, we read that “. . . the angel of the Lord appeared to [Moses] in flames of fire from within a bush. Moses saw that though the bush was on fire it did not burn up. When the Lord saw that he had gone over to look, God called to him from within the bush . . .”

Many mundane explanations have been offered for Moses’ experience. Moses wasn’t stupid. He wasn’t looking at some brightly colored plant. This was unusual enough to cause him to turn aside to examine it. Furthermore, a bush that burned without being consumed was not on fire. This was a naturally-occurring corona discharge.

It seems that natural electrical activity was rampant during the time of the Israelite Exodus. The Shekinah Glory above the Israelite Tabernacle was a much more magnificent version of the same phenomenon. The Seventy Israelite Elders (Num. 11:24-25) experienced this in a personal way. The coronas enshrouding each of them were believed to be the Spirit of God. 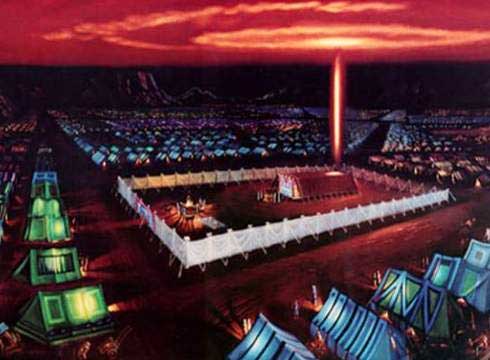 With an intermittent presence of the field, the fiery cloud would come and go above the Tabernacle at irregular intervals. When it was present, the Israelites encamped; when it was not, they moved.

Inside the structure, with all its metallic trappings, there would have been other electrical activity when the field was present. Sometimes, depending on the strength of the field, this activity—arcing and coronas—occurred throughout the interior. Moses was then unable to enter because “the glory of the Lord filled the tabernacle.”

Nearly a half-millennium later, Solomon erected in Jerusalem a more permanent edifice honoring Jehovah: the Temple. Like the Tabernacle, it was splendid in its metallic finery; gold overlay proliferated throughout the interior—on structure and furnishings alike. Immediately upon completion, Divine approval was presumed at the probably unexpected reappearance of the Cloud of Jehovah, which filled the Temple in a repetition of what Moses had witnessed in the wilderness: 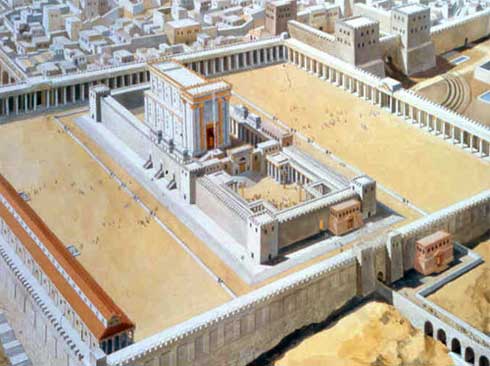 That the cloud was associated with an electric field is attested by what followed the cloud’s appearance in the Temple. The field was stronger than in Moses’ day, and the greater strength called for electrons to do what they do in such a situation and neutralize the voltage difference responsible for the field. Solomon offered a lengthy prayer of dedication, and then, “When Solomon finished praying, fire came down from heaven and consumed the burnt offering and the sacrifices, and the glory of the Lord filled the temple.” (II Chron. 7:1). The people of Israel witnessed an electrical discharge from the sky to the earth.

Returning to the time of Moses, the subject of sky-to-ground discharges may be the key to solving one more puzzle associated with the Camp of Israel:

The errant Israelites most likely suffered a similar fate: They were electrocuted by multiple strokes of “invisible lightning.”

Holy Scriptures of antiquity often had their origins in the inexplicable. They contain records of events that could be perceived only as miraculous. Natural electrical phenomena, not to be comprehended for millennia, provided ample cause of both wonderment and fear. The developmental pattern of this literature was incomprehension, then transcription and veneration, and then exegesis. The sacred writings of the ancients generally had a basis in reality, and they tell us more than their authors knew themselves.

For a more comprehensive and detailed analysis of the Israelite experience (including references), see MAN AND HIS PLANET – An Unauthorized History  by James E. Strickling,  Eloquent Books, ISBN: 978-1-60693-099-1. Go to www.jimstrickling.com

Note from the Editor

The Bible contains many descriptions that defy convincing explanation on the grounds of theology (but become comprehensible when interpreted in context of modern technology). Follow links below to unaltered quotations from the Bible and come to your own conclusions:

1 And it came to pass in the four hundred and eightieth[a] year after the children of Israel had come out of the land of Egypt, in the fourth year of Solomon’s reign over Israel, in the month of Ziv, which is the second month, that he began to build the house of the LORD.
2 Now the house which King Solomon built for the LORD, its length was sixty cubits, its width twenty, and its height thirty cubits.
3 The vestibule in front of the sanctuary[b] of the house was twenty cubits long across the width of the house, and the width of the vestibule[c]extended ten cubits from the front of the house.
4 And he made for the house windows with beveled frames.
5 Against the wall of the temple he built chambers all around, against the walls of the temple, all around the sanctuary and the inner sanctuary.[d] Thus he made side chambers all around it.
6 The lowest chamber was five cubits wide, the middle was six cubits wide, and the third was seven cubits wide; for he made narrow ledges around the outside of the temple, so that the support beams would not be fastened into the walls of the temple.
7 And the temple, when it was being built, was built with stone finished at the quarry, so that no hammer or chisel or any iron tool was heard in the temple while it was being built.
8 The doorway for the middle story[e]was on the right side of the temple. They went up by stairs to the middle story, and from the middle to the third.
9 So he built the temple and finished it, and he paneled the temple with beams and boards of cedar.
10 And he built side chambers against the entire temple, each five cubits high; they were attached to the temple with cedar beams.
11 Then the word of the LORD came to Solomon, saying:
12 “Concerning this temple which you are building, if you walk in My statutes, execute My judgments, keep all My commandments, and walk in them, then I will perform My word with you, which I spoke to your father David. 13 And I will dwell among the children of Israel, and will not forsake My people Israel.”
14 So Solomon built the temple and finished it.
15 And he built the inside walls of the temple with cedar boards; from the floor of the temple to the ceiling he paneled the inside with wood; and he covered the floor of the temple with planks of cypress.
16 Then he built the twenty-cubit room at the rear of the temple, from floor to ceiling, with cedar boards; he built it inside as the inner sanctuary, as the Most Holy Place.
17 And in front of it the temple sanctuary was forty cubits long. 18 The inside of the temple was cedar, carved with ornamental buds and open flowers. All was cedar; there was no stone to be seen.
19 And he prepared the inner sanctuary inside the temple, to set the ark of the covenant of the LORD there.
20 The inner sanctuary was twenty cubits long, twenty cubits wide, and twenty cubits high. He overlaid it with pure gold, and overlaid the altar of cedar.
21 So Solomon overlaid the inside of the temple with pure gold. He stretched gold chains across the front of the inner sanctuary, and overlaid it with gold.
22 The whole temple he overlaid with gold, until he had finished all the temple; also he overlaid with gold the entire altar that was by the inner sanctuary.
23 Inside the inner sanctuary he made two cherubim of olive wood, each ten cubits high.
24 One wing of the cherub was five cubits, and the other wing of the cherub five cubits: ten cubits from the tip of one wing to the tip of the other.
25 And the other cherub was ten cubits; both cherubim were of the same size and shape.
26 The height of one cherub was ten cubits, and so was the other cherub.
27 Then he set the cherubim inside the inner room;[f] and they stretched out the wings of the cherubim so that the wing of the one touched one wall, and the wing of the other cherub touched the other wall. And their wings touched each other in the middle of the room.
28 Also he overlaid the cherubim with gold.
29 Then he carved all the walls of the temple all around, both the inner and outer sanctuaries, with carved figures of cherubim, palm trees, and open flowers.
30 And the floor of the temple he overlaid with gold, both the inner and outer sanctuaries.
31 For the entrance of the inner sanctuary he made doors of olive wood; the lintel and doorposts were one-fifth of the wall.
32 The two doors were of olive wood; and he carved on them figures of cherubim, palm trees, and open flowers, and overlaid them with gold; and he spread gold on the cherubim and on the palm trees.
33 So for the door of the sanctuary he also made doorposts of olive wood, one-fourth of the wall.
34 And the two doors were of cypress wood; two panels comprised one folding door, and two panels comprised the other folding door.
35 Then he carved cherubim, palm trees, and open flowers on them, and overlaid them with gold applied evenly on the carved work.
36 And he built the inner court with three rows of hewn stone and a row of cedar beams.
37 In the fourth year the foundation of the house of the LORD was laid, in the month of Ziv.
38 And in the eleventh year, in the month of Bul, which is the eighth month, the house was finished in all its details and according to all its plans. So he was seven years in building it.