I start from the concept that numbers are to be characterized as the means of defining a value by a symbol.

On this chart I define numbers by the symbols 0 & 1 with these to represent the opposites from which all other numbers arise, for us humans such a system is of course unworkable so in order to make it workable I have placed alongside the numbers f1 – f9. My reason for defining these as an f number will clarify as we move forward.

The natural cycle starts out with 0 on the left to represent the negative element and 1 on the right to represent the positive element. After this the natural set of numbers become artificial and increase in value on the 0 moving to the right-hand side of the 1 – 9, first in tens, then hundreds, with this to continue indefinitely.

This definition is ancient, appearing as early as Euclid’s Elements (VII.22) where it is called perfect, ideal, or complete number.
Euclid also proved a formation rule (IX.36) whereby p(p+1)/2  is an even perfect number whenever p is what is now called a Mersenne prime.
Much later, Euler proved that all even perfect numbers are of this form. This is known as the Euclid–Euler theorem.

After these the numbers are too large to set down, but these are a sample of number of digits they contain and the year of discovery.

An aspect of numbers that were known to ancient man is that of a `perfect` number with this the list from the early Greeks to the present time. 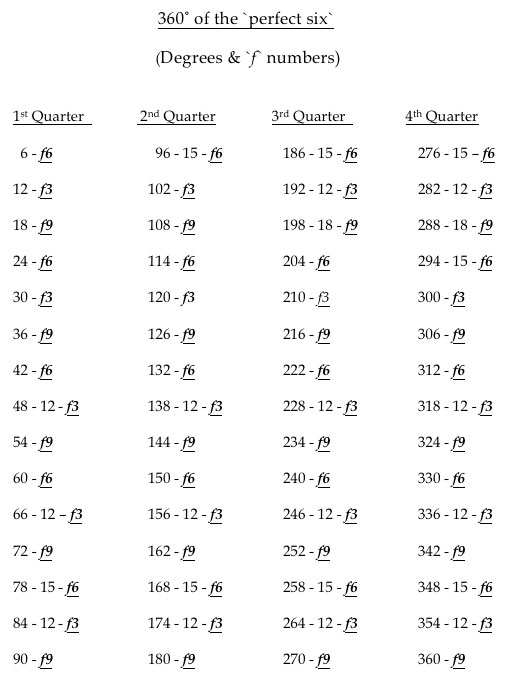 Following on from a day comprised of quarters, hours, minutes in which the number of seconds = 3600 = f9, when a circle is divided into quarters and into units of 6? the same sequence of f6, f3, f9 appear, as is the cycle brought to close with the f9. 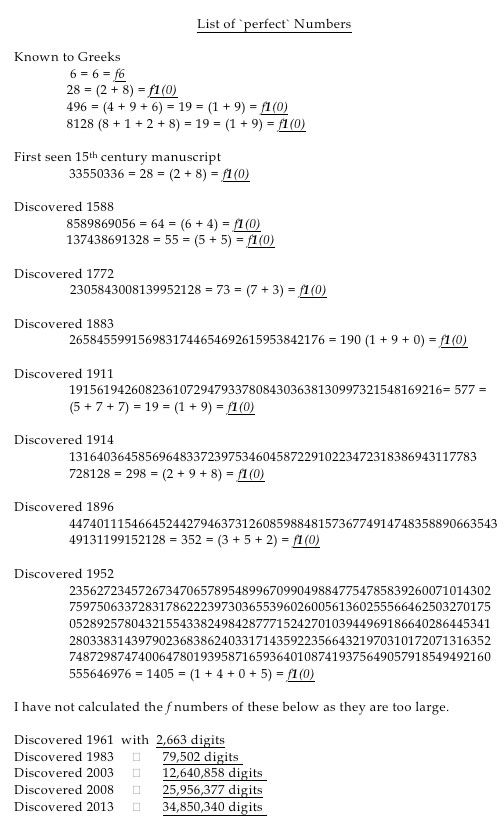 With an `f` number as representing the natural time cycle, as found with a day, a circle, as well as in a list of `perfect` numbers, this would appear not to be the case when it came a priesthood that lived in a world dominated by a solar cycle of 365¼ days, as obviously such a number would not dived equally. However whilst a seasonal year of this length will not divided equally, an artificial `year` of 364 days will, so for me it became a matter of finding a means by which the priesthood could compensate for the `missing` 1¼ days – which in terms of a `perfect` number converts as 4 x 6 hours and 1 x 6 hours.

The reason for the priesthood wanting a uniform `year` was in order to comply with the fundamental Law of keeping a Sabbath in place. In Genesis we have:

In my study of the Temple I was aware of two `festivals` that brought in the `perfect` six, although this is not at first apparent, as according to those who had first translated the scriptures into Greek, between 280 – 130 BC, known as the Septuagint (Latin: `Seventy`.
Supposedly because of the number of translators) seemingly the thinking was the smallest time cycle followed by the Hebrews was that of a day. However once it is accepted that the priesthood was well aware that a day was to be divided, at least, into hours then what appears in some texts as `days` for these two `festival` need to be read as hours. 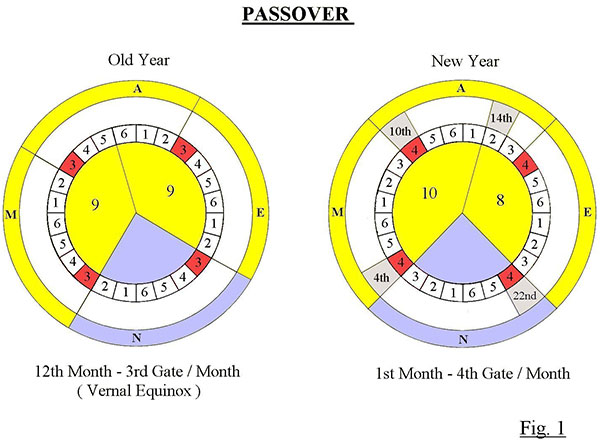 The `missing` day is to be found in what is known as Passover: said to have been the 10th day of the month when Moses was to lead an enslaved Israel out of bondage from Egypt , the time of leaving is said to have followed the killing of the firstborn of the Egyptians, at `midnight`.
As seen charted (for reasons I enter into in deal in my writings) this passing over of a day took place at the end of the old year and start of a new year. (Exodus 12:1-28. In the King James Version the word day does not appear in the original text but in order to make it read `right` has been inserted.) 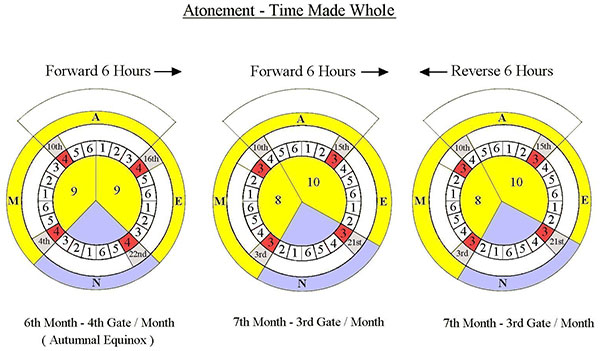 The same misunderstanding is found with Atonement, which is given as the 10th of the 7th month (Leviticus 16:29. )
The word day once more missing from the KJ version but is again found inserted. As brought out on the chart the 6 hours was to be absorbed by putting the `clock` back by this amount, which leaves us with a priesthood whose calendar would lose one day each year that obviously would have to be accounted for.
How they compensated for this was, as seen next, to allow the 6 hours to drop back over a time cycle of (12 x 6 =) 72 years so we are again dealing with the highest f number of 9. 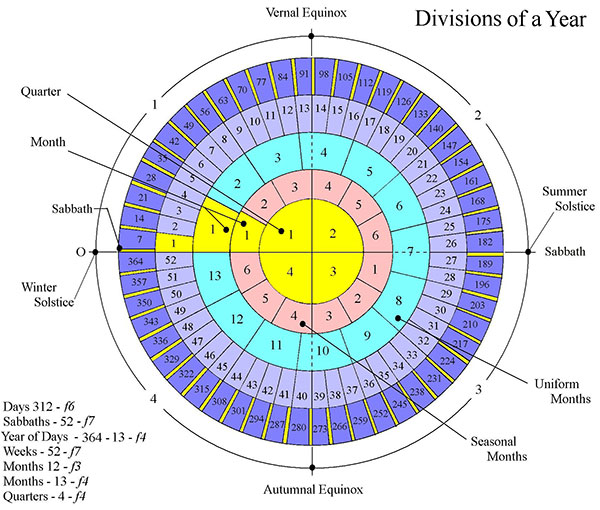 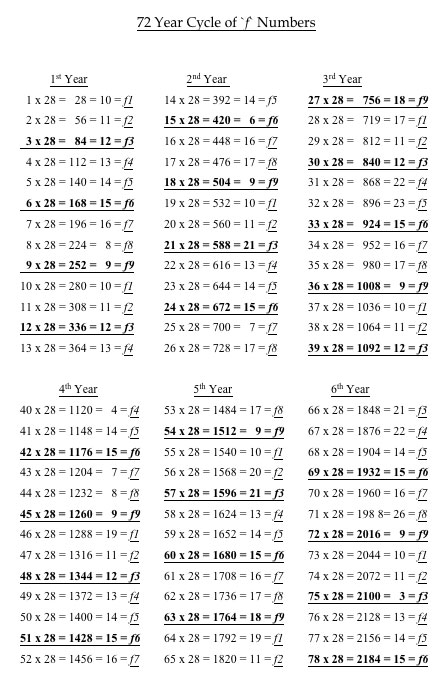 On charting a uniform cycle of 13 months over a period of 72 years, the sequence is one of a repeating cycle of f6, f3, f9, and in this the `f` numbers are seen to match those of the month numbers. i.e.

However such numbers represent but one cycle of 72 years, whereas in a Temple that stood for centuries this cycle would only be the first of many, each of which would bring an increase in numbers – as we shall see.

With this abridgment the f3, f6, f9 sequence is brought out better.

It is to be noted that on reaching the 36th year; the halfway point through the 72 year cycle, the outline is of a diagonal cross with this symbolising the movement of an artificial time cycle, over that of the natural `fixed` cycle as defined by the solar cycle.

The cycle now three quarters the way through continues.

On reaching the limit of travel the diagonal cross and upright cross are one more in alignment, at which point the cycle restarts as on Fig. 4A.

The effect on the priesthood and local population after 72 years would be one of a gradual dropping back on the seasons towards winter – to that of a sudden return to what the older generations would remember from their youth as spring.

Applied to a Temple that was in use over centuries this cycle of 72 years would only be the starting point of the numbers as represented by 936 months or 26208 days, as after this the second cycle record as 144 years, the third as 216 years, the forth as 288 years and fifth as 360 years, and so on.

Each set of years having their own month and day numbers so would they continue to increase for as long as records were kept. If at some later stage what these numbers represented was not understood, or that what they were recording as the means by which a Sabbath was kept in place then to come across even the first set of number (936 x 28 =) 26208 in a connection with the priesthood and `service` given over a period of 72 years would have been at the very least mystifying.

Whereas to have come across numbers, defining years of `service`, that increase by a factor x 2 to and so produce 52416, or, by a factor of x 3 to 78624, or, by x 4 to 104832 and so on creates their own problems. It also means such numbers can no more be understood in terms of a Priesthood that belonged to the Temple (the House of Israel) so would have to be in some way allocated to the People of the House of Israel.

Seen in this light explanations began to emerge that would explain the implausible account in Exodus in which we have the figure of Moses as leading Israel in a mass migration, numbered in hundreds of thousands, out of Egypt into a wilderness in what is reported to have been forty years with the objective of eventually reaching a `promised land` and there build the Temple. (In another section of my Temple study, I bring out evidence that the numbers found with a time cycle based on the `perfect` six also applies to the priesthood that was itself based on twelve groups each of six priests who offered `service` over a period of six days, with the Sabbath, the 7th, a day of rest.)

Once this system of dividing a circle into sections is accepted as the means by which the ancients recorded time and numbers, it follows this system would have been passed on to others, either in the form of the detail seen on my Charts, or, by means of symbolizing it in other ways. It was from this point of view, along with the knowledge concerning the occupation of Jerusalem by the Romans, that lead me to the connection between this symbolization and what is found incorporated into the system of numbering used by the Romans. 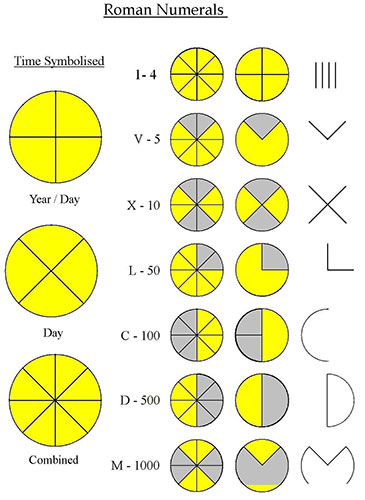 It is said the system of numbering the Romans used had been adapted from one used by the Etruscans some centuries earlier, with this later modified during the Middle Ages. It is also claimed the Romans system was based on certain letters being given numerical values and the concept of the zero did not exist in Europe until after 1000 AD. However the numerals are set against the ascending and descending cycle of Fig. 4 and the 36 year cycle seen on Fig. 5B it becomes obvious that a zero forms the basis of the numbers and what we now have in Roman Numerals is an abridgment of a more complex image.

In outline this represents a section of what I have in my main work on Time and Numbers the end result is a new line of inquiry opens up on the extent of what was known in ancient times.
I look forward to any comments you care to make.