The human body alone is pretty incredible, with the capability to heal itself of wounds, fight off disease and infection, and give birth to new life.

When we read comic books and watch television and movies, we are drifted off to a fantasy world where the human body can do incredible things like fly, become invisible, control the elements, cast magic spells, and shoot lasers from their eyes. Having superpowers in general, is merely a fantasy that is reserved for Hollywood and the library. But, there are a special few out there who have been born with what we would call superpowers. The people in this video possessed abilities that defy physics and normal human nature.

For example, if you are blind, you obviously don’t have the ability to see at all. But there are two individuals named Daniel Kisch and Ben Underwood, who have the ability to see despite losing their vision to retinal cancer at a young age. Though these two never met growing up, they both figured out how to survey their surroundings and literally see what’s around them using echolocation by the click of their tongues. While Ben ultimately succumbed to the same cancer that took away his vision, Kisch has dedicated his life to teaching his echolocation technique to other blind children. So, this means that there could be more people who, while they can’t see with their eyes, can live a somewhat normal life without the restrictions of having no sight.

Of course, there are some special people out there who were born with abilities that are straight up bizarre. Take Wim Hof for example. The man seems to be impervious to the cold. No matter how cold it gets, Wim maintains his internal body temperature. He is able to withstand freezing ice baths, and has broken numerous world records for not only temperature, but also duration of withstanding these temperatures. Wim has also climbed Mount Kilamonjaro along with attempting to climb Mount Everest. But the reason of being unable to complete Everest wasn’t because it got too cold, instead he had a foot injury that prevented him from going any further.

Then we have a man who can conduct his own electricity. His name is Slavisa Pajkic, and he realized that he had a special gift after he accidentally touched a live electric fence. But nothing happened! Realizing this, Slavisa started experimenting and learned that he could cook a sausage in his hands, as well as heat up a cup of water. Just be careful if you decide to shake hands with him.

Next, the ability to have X-ray vision isn’t just reserved for the comic book superheroes. A young woman by the name of Natasha Demkina claims to possess a special kind of vision where she can see the internal organs of other people. This skill first came to light when she was only ten years old when she told her mother she could see inside her body. Her mother took her to the doctor, and Natasha was able to tell the doctor exactly what kind of scars he had under his clothing. 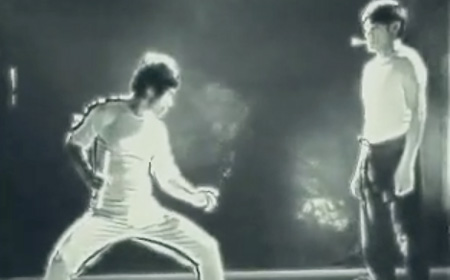 I AM BRUCE LEE – AMAZING BE LIKE WATER Bruce Lee video!
Bruce Lee playing ping pong with nunchucks … and more!

JEB CORLISS Returns to the Crack