The Mesoamerican ballgame was a sport with ritual associations played since 1,400 B.C. by the pre-Columbian peoples of Ancient Mexico and Central America. The sport had different versions in different places during the millennia, and a modern version of the game, ulama, is still played in a few places by the local indigenous population.
The rules of the ballgame are not known, but judging from its descendant, ulama, they were probably similar to racquetball, where the aim is to keep the ball in play. The stone ballcourt goals are a late addition to the game. 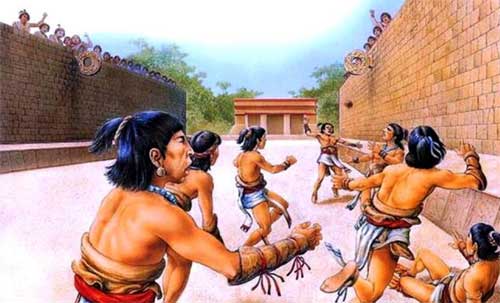 In the most widespread version of the game, the players struck the ball with their hips, although some versions allowed the use of forearms, rackets, bats, or handstones. The ball was made of solid rubber and weighed as much as 4 kg (9 lbs), and sizes differed greatly over time or according to the version played.
The game had important ritual aspects, and major formal ballgames were held as ritual events, often featuring human sacrifice. The sport was also played casually for recreation by children and perhaps even women.[4]
Pre-Columbian ballcourts have been found throughout Mesoamerica, as far south as Nicaragua, and possibly as far north as what is now the Central Mexico.[5] These ballcourts vary considerably in size, but all have long narrow alleys with side-walls against which the balls could bounce.

Ancient Egypt was known to play an early form of soccer with a somewhat circular shaped object.

The first official balls were manufactured by Charles Goodyear in 1836. Other than that read this. “Through out history, humans have enjoyed kicking a ball or something like a ball. South American Indians were known to use a light elasticized ball. However; rubber was not to be practically manufactured until a few thousand years later.

According to historical references and legend, early balls ranged from human heads, stitched up cloth, animal and human skulls to pig or cow bladders.
During the Ts’in and Han Dynasties (255 BC-220 AD), the Chinese played ‘tsu chu’, in which animal-skin balls were dribbled through gaps in a net stretched between two poles.
Certain ancient Egyptian rites are said by historians to have similarities with football, and both the ancient Greeks and Romans also played a game that entailed carrying and kicking a ball.

According to pre-medieval legend, an entire village would kick a skull along a path to a nearby village square. The opposing village would in turn attempt to kick the skull to the first village’s square. Wow, that probably caused more riots than in modern soccer games.

A Medieval custom was to take pig bladders used from live stock killed in preparation for winter sustenance and inflate them. They would play a game using their feet and hands to keep the “ball” in the air. Sounds like hacky sack to me.  The animal bladder balls were eventually covered with leather for better shape retention.”

Fireworks are a class of explosive pyrotechnic devices used for aesthetic and entertainment, and religious purposes. The most common use of a firework is as part of a fireworks display. 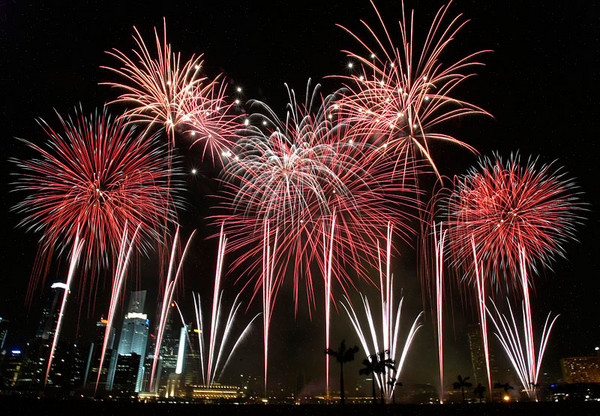 The earliest documentation of fireworks dates back to 7th century China, where they were invented. The fireworks were used to accompany many festivities. It is a part of the culture of China and had its origin there; eventually it spread to other cultures and societies. Important events and festivities such as the Spring Festival (Chinese New Year) and the Mid-Autumn Festival were and still are times when fireworks are guaranteed sights. China is the largest manufacturer and exporter of fireworks in the world.

Fireworks date back to the 10th century and originated in China. The Chinese developed many different kinds of fireworks with a variety of effects and color. The art and science of firework making developed into an independent profession. In China, pyrotechnicians were respected for their knowledge of complex techniques in mounting firework displays.

During the Song Dynasty (960–1279), many of the common people could purchase various kinds of fireworks from market vendors, and grand displays of fireworks were also known to be held. In 1110, a large fireworks display in a martial demonstration was held to entertain Emperor Huizong of Song (r. 1100–1125) and his court. A record from 1264 states that a rocket-propelled firework went off near the Empress Dowager Gong Sheng and startled her during a feast held in her honor by her son Emperor Lizong of Song (r. 1224–1264). Rocket propulsion was common in warfare, as evidenced by the Huolongjing compiled by Liu Ji (1311–1375) and Jiao Yu (fl. c. 1350–1412). In 1240 the Arabs acquired knowledge of gunpowder and its uses from China. A Syrian named Hasan al-Rammah wrote of rockets, fireworks, and other incendiaries, using terms that suggested he derived his knowledge from Chinese sources, such as his references to fireworks as “Chinese flowers”.

With the development of chinoiserie in Europe, Chinese fireworks began to gain popularity around the mid-17th century. Lev Izmailov, ambassador of Peter the Great, once reported from China: “They make such fireworks that no one in Europe has ever seen.” In 1758, the Jesuit missionary Pierre Nicolas le Chéron d’Incarville, living in Beijing, wrote about the methods and composition on how to make many types of Chinese fireworks to the Paris Academy of Sciences, which revealed and published the account five years later. His writings would be translated in 1765, resulting in the popularization of fireworks and further attempts to uncover the secrets of Chinese fireworks.

The list of ancient inventions is endless. This post is intended as nearly random, eclectic sampling of  inventions which reflect human intelligence and ingenuity.

If you are interested in this subject, one of worthwhile resources is this book:  Ancient Inventions 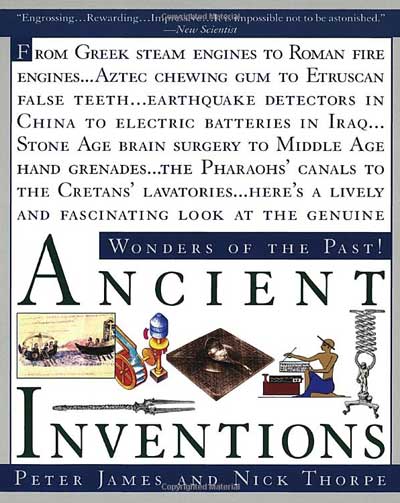 Historian Peter James and archaeologist Nick Thorpe define the ancient period as the time before A.D. 1492, analyzing the evolution of inventions from brain surgery to playing cards, and putting into perspective the accomplishments of many diverse cultures while laying to rest some “distorted Western views of history.” — Denise Perry Donavin

You leave your seventh-floor apartment, curse the congested traffic that delays you, and stop at a fast-food restaurant on your way to have cataract surgery. You live in Rome in A.D. 25. Ancient Inventions entertainingly demonstrates that there is indeed little new under the sun. The book is divided by the authors (Centuries of Darkness, LJ 3/15/93) into convenient, browsable sections such as “Sex Life,” “Military Technology,” and “Communications,” each one presenting fascinating evidence of the extent to which human knowledge can be extinguished. Cute rather than hilarious in its humor, Ancient Inventions is thoroughly researched and profusely illustrated; it is doubtful that anyone could examine it without coming away enlightened in one of its broadly ranging areas. This work will be used as much for its historical information and accounts of ancient daily life as it will be for recreational reading. Historical First Patents is an overview of over 80 granted U.S. patent applications, with emphasis on the familiar: Howe, Whitney, Bell, and others whose names are closely associated with a specific device. Each entry consists of the historical developments leading to the invention, a biographical description of the inventor, and the story of the creation of the invention itself. A patent drawing accompanies most entries, although some contain a reproduction of the first page of the published patent in print so small as to be useless. The writing is rather stilted (Lincoln’s entry mentions three times in the first three paragraphs that he was the only president to receive a patent), and some obvious errors have not been caught. Some of the patents included here are for items discussed in Ancient Inventions and known thousands of years earlier, such as artificial limbs, cylinder locks, and anesthesia. Of the two books, Ancient Inventions contains information more difficult to locate elsewhere and will serve the broadest audience. Both books are appropriate for school, academic, and public libraries.  — James Moffet, Baldwin P.L., Birmingham, Mich.  Copyright 1994 Reed Business Information, Inc. –This text refers to an out of print or unavailable edition of this title.

We in the twentieth century tend to assume that our era has a monopoly on the inventions of clever machines, labor-saving devices, feats of engineering, and advanced technology. But as the authors of this fascinating and eye-opening book reveal, some of humankind’s most important and most amazing inventions actually date back thousands of years.  Historian Peter James and archaeologist Nick Thorpe have pooled their expertise in amassing this compendium of human ingenuity through the ages. Together they conclusively prove that our ancestors, however long ago they lived and whatever part of the globe they occupied, were brilliant problem-solvers. Written with the pure joy of discovery, Ancient Inventions reveals that:
Brimming with odd facts and entertaining curiosities, written with zest and humor, comprehensive and fun to read, Ancient Inventions is a wonderful celebration of the endless inventiveness of the human mind.
“This presentation of the discoveries and innovations of the ancients will fascinate.”   –Booklist
“Thoroughly researched…It is doubtful that anyone could examine [this book] without coming away enlightened in one of its broadly ranging areas.”  –Library Journal