A mirror is an object that reflects light or sound in a way that preserves much of its original quality subsequent to its contact with the mirror. Some mirrors also filter out some wavelengths, while preserving other wavelengths in the reflection. This is different from other light-reflecting objects that do not preserve much of the original wave signal other than color and diffuse reflected light. The most familiar type of mirror is the plane mirror, which has a flat surface. Curved mirrors are also used, to produce magnified or diminished images or focus light or simply distort the reflected image.

Mirrors are commonly used for personal grooming or admiring oneself (in which case the archaic term looking-glass is sometimes still used), decoration, and architecture. Mirrors are also used in scientific apparatus such as telescopes and lasers, cameras, and industrial machinery. Most mirrors are designed for visible light; however, mirrors designed for other types of waves or other wavelengths of electromagnetic radiation are also used, especially in non-optical instruments. 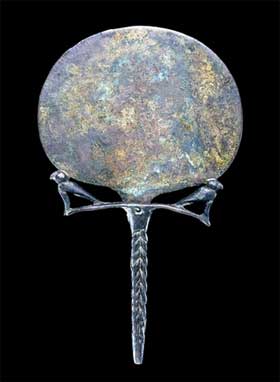 Bronze mirror decorated with two falcons, From Egypt, Middle Kingdom (about 2040-1750 BC)

The form of the ancient Egyptian mirror changed little from its first appearance in the Old Kingdom (about 2613-2160 BC) and consisted of a polished disc of bronze or copper, attached to a handle. The reflective surface was interpreted as the sun disc, because of its shape and shiny qualities. The falcons on this example might represent the sun-god Re.

The handle of the mirror was of wood, metal or ivory. This example has been made to appear as if it has been plaited. A papyrus stalk, or the figure of Hathor were also common. The handle could also be surmounted by the head of Hathor. She was particularly associated with the mirror, which had connotations of sexuality and rebirth.

The first mirrors used by people were most likely pools of dark, still water, or water collected in a primitive vessel of some sort. The earliest manufactured mirrors were pieces of polished stone such as obsidian, a naturally occurring volcanic glass. Examples of obsidian mirrors found in Anatolia (modern-day Turkey) have been dated to around 6000 BC. Polished stone mirrors from Central and South America date from around 2000 BC onwards. Mirrors of polished copper were crafted in Mesopotamia from 4000 BC, and in ancient Egypt from around 3000 BC. In China, bronze mirrors were manufactured from around 2000 BC, some of the earliest bronze and copper examples being produced by the Qijia culture. Mirrors made of other metal mixtures (alloys) such as copper and tin speculum metal may have also been produced in China and India. Mirrors of speculum metal or any precious metal were hard to produce and were only owned by the wealthy. 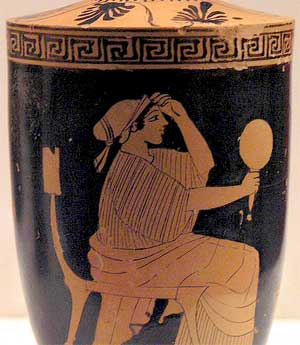 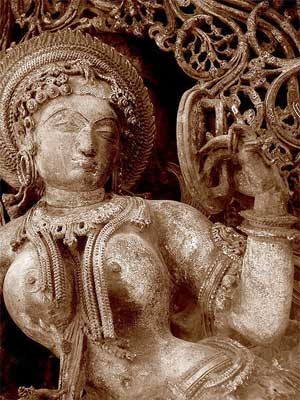 A sculpture of a lady looking into a mirror, India

Metal-coated glass mirrors are said to have been invented in Sidon (modern-day Lebanon) in the first century AD, and glass mirrors backed with gold leaf are mentioned by the Roman author Pliny in his Natural History, written in about 77 AD. The Romans also developed a technique for creating crude mirrors by coating blown glass with molten lead.

Parabolic mirrors were described and studied in classical antiquity by the mathematician Diocles in his work On Burning Mirrors. Ptolemy conducted a number of experiments with curved polished iron mirrors, and discussed plane, convex spherical, and concave spherical mirrors in his Optics. Parabolic mirrors were also described by the physicist Ibn Sahl in the 10th century, and Ibn al-Haytham discussed concave and convex mirrors in both cylindrical and spherical geometries,[13] carried out a number of experiments with mirrors, and solved the problem of finding the point on a convex mirror at which a ray coming from one point is reflected to another point. By the 11th century, clear glass mirrors were being produced in Moorish Spain.

In China, people began making mirrors with the use of silver-mercury amalgams as early as 500 AD. Some time during the early Renaissance, European manufacturers perfected a superior method of coating glass with a tin-mercury amalgam. The exact date and location of the discovery is unknown, but in the 16th century, Venice, a city famed for its glass-making expertise, became a centre of mirror production using this new technique. Glass mirrors from this period were extremely expensive luxuries. The Saint-Gobain factory, founded by royal initiative in France, was an important manufacturer, and Bohemian and German glass, often rather cheaper, was also important.

The invention of the silvered-glass mirror is credited to German chemist Justus von Liebig in 1835. His process involved the deposition of a thin layer of metallic silver onto glass through the chemical reduction of silver nitrate. This silvering process was adapted for mass manufacturing and led to the greater availability of affordable mirrors. Nowadays, mirrors are often produced by the vacuum deposition of aluminium (or sometimes silver) directly onto the glass substrate.

Glasses, also known as eyeglasses (formal), spectacles or simply specs (informal), are frames bearing lenses worn in front of the eyes. They are normally used for vision correction or eye protection. Safety glasses are a kind of eye protection against flying debris or against visible and near visible light or radiation. Sunglasses allow better vision in bright daylight, and may protect against damage from high levels of ultraviolet light. Other types of glasses may be used for viewing visual information (such as stereoscopy) or simply just for aesthetic or fashion purposes. 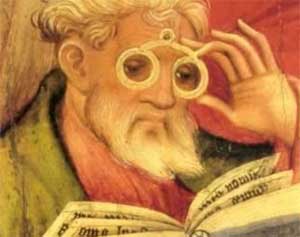 The earliest depiction of spectacles [eyeglasses] in a painted work of art occurs in a series of frescoes dated 1352 by Tommaso da Modena in the Chapter House of the Seminario attached to the Basilica San Nicolo in Treviso, north of Venice. Cardinal Hugo of Provence [Hugh de St. Cher] is shown at his writing desk wearing a pair of rivet spectacles that appear to stay in place on the nose without additional support. 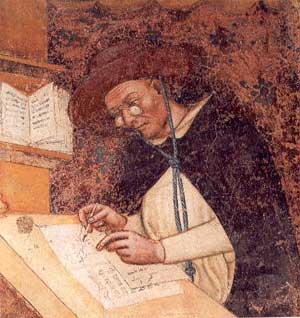 Detail of a portrait of Hugh de Provence, painted by Tomaso da Modena in 1352.

Portrait of cardinal Fernando Niño de Guevara by El Greco circa 1600 shows spectacles with temples passing over the ears: 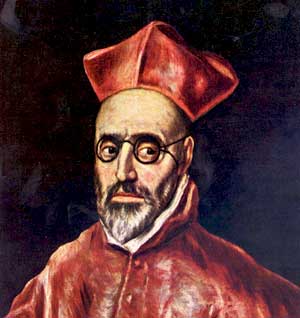 The earliest historical reference to magnification dates back to ancient Egyptian hieroglyphs in the 5th century BC, which depict “simple glass meniscal lenses”.

The earliest written record of magnification dates back to the 1st century AD, when Seneca the Younger, a tutor of Emperor Nero of Rome, wrote: “Letters, however small and indistinct, are seen enlarged and more clearly through a globe or glass filled with water”. Nero (reigned 54–68 AD) is also said to have watched the gladiatorial games using an emerald as a corrective lens.

The use of a convex lens to form a magnified image is discussed in Alhazen’s Book of Optics (1021). Its translation into Latin from Arabic in the 12th century was instrumental to the invention of eyeglasses in 13th century Italy.

Englishman Robert Grosseteste’s treatise De iride (“On the Rainbow”), written between 1220 and 1235, mentions using optics to “read the smallest letters at incredible distances”. A few years later, Roger Bacon is also known to have written on the magnifying properties of lenses in 1262.

Sunglasses, in the form of flat panes of smoky quartz, were used in China in the 12th century. Similarly, the Inuit have used snow goggles for eye protection. However, while they did not offer any corrective benefits they did improve visual acuity by narrowing the field of vision. The use by historians of the term “sunglasses” is anachronistic before the twentieth century.

Note: Part 2 is divided into 7 pages.
To continue reading, please click on the next page: