Codes, ciphers, and codebreaking have been around for millennia, with the survival of nations sometimes hanging on the security of codes and ciphers…

The oldest means of sending secret messages is to simply conceal them by one trick or another. The ancient Greek historian Herodotus wrote that when the Persian Emperor Xerxes moved to attack Greece in 480 BCE, the Greeks were warned by an Greek named Demaratus who was living in exile in Persia. In those days, wooden tablets covered with wax were used for writing. Demaratus wrote a message on the wooden tablet itself and then covered it with wax, allowing the vital information to be smuggled out of the country.

The science of sending concealed messages is known as “steganography”, Greek for “concealed writing”. Other classical techniques for smuggling a message included tattooing it on the scalp of a messenger, letting his hair grow back, and then sending him on a journey. At the other end, the recipient shaved the messenger’s hair off and read the message.

Steganography has a long history, leading to inventions such as invisible ink and “microdots”, or highly miniaturized microfilm images that could be hidden almost anywhere. Microdots are a common feature in old spy movies and TV shows. However, steganography is not very secure by itself. If someone finds the hidden message, all its secrets are revealed. That led to the idea of obscuring the message so that it could not be read even if it were intercepted, and the result was “cryptography”, Greek for “hidden writing”. The result was the development of “codes”, or secret languages, and “ciphers”, or scrambled messages.

The distinction between codes and ciphers is commonly misunderstood.

A “code” is essentially a secret language invented to conceal the meaning of a message.

There are two classes of ciphers.

“Encryption” covers both encoding and enciphering, while “decryption” covers both decoding and deciphering. This should also imply the term “cryptotext” to cover both codetext and ciphertext, but this term doesn’t seem to be in use, although the term “encicode” is sometimes seen. The science of creating codes and ciphers is known, as mentioned, as “cryptography”, while the science of breaking them is known as “cryptanalysis”. Together, the two fields make up the science of “cryptology”.

Despite the fact that the term “code” is misleading, for the sake of readability this document will retain the use of general terms like “codebreaker”, “code bureau”, “code expert”, and “army codes”, instead of continually belaboring the distinction between codes and ciphers. As long as the distinction between “code” and “cipher” is clearly understood, this usage should cause no difficulty. By the way, in cryptographic examples, cryptographers like to use the fictional characters “Alice” and “Bob”, with Alice writing encrypted messages and Bob decrypting them. This convention will be followed in this document, along with the unconventional use of “Holmes” as a fictional codebreaker.

The earliest known use of cryptography is found in non-standard hieroglyphs carved into monuments from the Old Kingdom of Egypt circa 1900 BC. These are not thought to be serious attempts at secret communications, however, but rather to have been attempts at mystery, intrigue, or even amusement for literate onlookers. These are examples of still other uses of cryptography, or of something that looks (impressively if misleadingly) like it. Some clay tablets from Mesopotamia somewhat later are clearly meant to protect information—one dated near 1500 BCE was found to encrypt a craftsman’s recipe for pottery glaze, presumably commercially valuable. Later still, Hebrew scholars made use of simple monoalphabetic substitution ciphers (such as the Atbash cipher) beginning perhaps around 500 to 600 BCE. 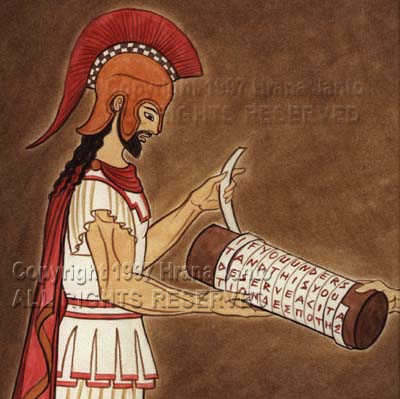 The ancient Greeks are said to have known of ciphers. The scytale transposition cipher was used by the Spartan military, however it is disputed whether the scytale was for encryption, authentication, or avoiding bad omens in speech. Herodotus tells us of secret messages physically concealed beneath wax on wooden tablets or as a tattoo on a slave’s head concealed by regrown hair, though these are not properly examples of cryptography per se as the message, once known, is directly readable; this is known as steganography. Another Greek method was developed by Polybius (now called the “Polybius Square”). The Romans knew something of cryptography (e.g., the Caesar cipher and its variations).

To continue reading,
please click on the next page (Ancient Timekeeping- Calendars):