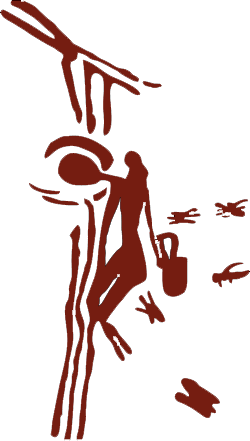 At some point humans began to attempt to domesticate wild bees in artificial hives made from hollow logs, wooden boxes, pottery vessels, and woven straw baskets or “skeps”. Honeybees were kept in Egypt from antiquity. On the walls of the sun temple of Nyuserre Ini from the 5th Dynasty, before 2422 BCE, workers are depicted blowing smoke into hives as they are removing honeycombs. Inscriptions detailing the production of honey are found on the tomb of Pabasa from the 26th Dynasty (circa 650 BCE), depicting pouring honey in jars and cylindrical hives. Sealed pots of honey were found in the grave goods of Pharaohs such as Tutankhamun.

In prehistoric Greece (Crete and Mycenae), there existed a system of high-status apiculture, as can be concluded from the finds of hives, smoking pots, honey extractors and other beekeeping paraphernalia in Knossos. Beekeeping was considered a highly valued industry controlled by beekeeping overseers — owners of gold rings depicting apiculture scenes rather than religious ones as they have been reinterpreted recently, contra Sir Arthur Evans.

Archaeological finds relating to beekeeping have been discovered at Rehov, a Bronze and Iron Age archaeological site in the Jordan Valley, Israel.[8] Thirty intact hives, made of straw and unbaked clay, were discovered by archaeologist Amihai Mazar of the Hebrew University of Jerusalem in the ruins of the city, dating from about 900 BCE. The hives were found in orderly rows, three high, in a manner that could have accommodated around 100 hives, held more than 1 million bees and had a potential annual yield of 500 kilograms of honey and 70 kilograms of beeswax, according to Mazar, and are evidence that an advanced honey industry existed in ancient Israel 3,000 years ago. Ezra Marcus, an expert from the University of Haifa, said the finding was a glimpse of ancient beekeeping seen in texts and ancient art from the Near East.
In ancient Greece, aspects of the lives of bees and beekeeping are discussed at length by Aristotle. Beekeeping was also documented by the Roman writers Virgil, Gaius Julius Hyginus, Varro, and Columella.

The art of beekeeping appeared in ancient China for a long time and hardly traceable to its origin. In the book “Golden Rules of Business Success” written by Fan Li (or Tao Zhu Gong) during the Spring and Autumn Period there are some parts mentioning the art of beekeeping and the importance of the quality of the wooden box for bee keeping that can affect the quality of its honey.

The first official mention recognizing the importance of honey dates from the first dynasty, when the title of “Sealer of the Honey” is given; the oldest pictures of bee-keepers in action are from the Old Kingdom: in Niuserre’s sun temple bee-keepers are shown blowing smoke into hives as they are removing the honey-combs. After extracting the honey from the combs it was strained and poured into earthen jars which were then sealed. Honey treated in this manner could be kept years. From the New Kingdom on mentions of honey become more frequent , but only four depictions of honey production and no actual hives have been found. 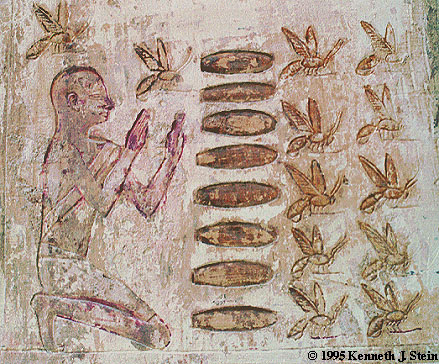 Cylindrical hives like the ones in the picture above from the tomb of Pabasa (7th century BCE) were made of clay and stacked on top of each other.
Photograph is attributable to Dr. Kenneth Stein and can be found at: http://www.virtualinsectary.com/egypt/egypt_15.htm

Bee-keeping methods are conservative in this region, well adapted to local conditions, for instance the kind of hives shown in these ancient reliefs, apparently woven baskets covered with clay, are still seen in the Sudan today.

The main centre of bee-keeping was Lower Egypt with its extensive cultivated lands, where the bee was chosen as a symbol for the country.  One of Pharaoh’s titles was Bee King, and the gods also were associated with the bee.  The sanctuary in which Osiris was worshiped was the Hwt bjt, the Mansion of the Bee.

There were itinerant apiarists in the Faiyum in Ptolemaic times using donkeys to transport their hives and possibly also beekeepers living by the Nile who loaded their hives onto boats, shipped them upriver in early spring, and then followed the flowering of the plants northwards as they were reported to do in the 19th century CE.

The Egyptians had a steady honey supply from their domesticated bees, but they seem to have valued wild honey even more. Honey hunters, often protected by royal archers, would scour the wild wadis for bee colonies.

I appointed for thee archers and collectors of honey, bearing incense to deliver their yearly impost into thy august treasury.

To continue reading,
please click on the next page (Language):