For the first time, a spacecraft far from Earth has turned and watched a solar storm engulf our planet. The movie, released today during a NASA press conference, has galvanized solar physicists, who say it could lead to important advances in space weather forecasting.

“The movie sent chills down my spine,” says Craig DeForest of the Southwest Researcher Institute in Boulder, Colorado. “It shows a CME swelling into an enormous wall of plasma and then washing over the tiny blue speck of Earth where we live. I felt very small.“

NASA’s STEREO spacecraft and new data processing techniques have succeeded in tracking space weather events from their origin in the sun’s corona to impact with the Earth, resolving a 40-year mystery about the structure of the structures that cause space weather: how the structures that impact the Earth relate to the corresponding structures in the solar corona. Credit: NASA/STEREO/Scott Wiessinger
[ if you have problem with viewing video above, click on this link: NASA – Space Storm Tracked from Sun to Earth ]

CMEs are billion-ton clouds of solar plasma launched by the same explosions that spark solar flares. When they sweep past our planet, they can cause auroras, radiation storms, and in extreme cases power outages. Tracking these clouds and predicting their arrival is an important part of space weather forecasting.

“We have seen CMEs before, but never quite like this,” says Lika Guhathakurta, program scientist for the STEREO mission at NASA headquarters. “STEREO-A has given us a new view of solar storms.”

STEREO-A is one of two spacecraft launched in 2006 to observe solar activity from widely-spaced locations. At the time of the storm, STEREO-A was more than 65 million miles from Earth, giving it the “big picture” view other spacecraft in Earth orbit lack.

When CMEs first leave the sun, they are bright and easy to see. Visibility is quickly reduced, however, as the clouds expand into the void. By the time a typical CME crosses the orbit of Venus, it is a billion times fainter than the surface of the full Moon, and more than a thousand times fainter than the Milky Way. CMEs that reach Earth are almost as gossamer as vacuum itself and correspondingly transparent.

“Pulling these faint clouds out of the confusion of starlight and interplanetary dust has been an enormous challenge,” says DeForest.

Indeed, it took almost three years for his team to learn how to do it. Footage of the storm released today was recorded back in December 2008, and they have been working on it ever since. Now that the technique has been perfected, it can be applied on a regular basis without such a long delay.

“Until quite recently, spacecraft could see CMEs only when they were still quite close to the sun. By calculating a CME’s speed during this brief period, we were able to estimate when it would reach Earth. After the first few hours, however, the CME would leave this field of view and after that we were ‘in the dark’ about its progress.”

“The ability to track a cloud continuously from the Sun to Earth is a big improvement,” she continues. “In the past, our very best predictions of CME arrival times had uncertainties of plus or minus 4 hours,” she continues. “The kind of movies we’ve seen today could significantly reduce the error bars.”

The movies pinpoint not only the arrival time of the CME, but also its mass. From the brightness of the cloud, researchers can calculate the gas density with impressive precision. Their results for the Dec. 2008 event agreed with actual in situ measurements at the few percent level. When this technique is applied to future storms, forecasters will be able to estimate its impact with greater confidence.

At the press conference, DeForest pointed out some of the movie’s highlights: When the CME first left the sun, it was cavernous, with walls of magnetism encircling a cloud of low-density gas. As the CME crossed the Sun-Earth divide, however, its shape changed. The CME “snow-plowed” through the solar wind, scooping up material to form a towering wall of plasma. By the time the CME reached Earth, its forward wall was sagging inward under the weight of accumulated gas.

The kind of magnetic transformations revealed by the movie deeply impressed Guhathakurta: “I have always thought that in heliophysics understanding the magnetic field is equivalent to the ‘dark energy’ problem of astrophysics. Often, we cannot see the magnetic field, yet it orchestrates almost everything. These images from STEREO give us a real sense of what the underlying magnetic field is doing.”

All of the speakers at today’s press event stressed that the images go beyond the understanding of a single event. The inner physics of CMEs have been laid bare for the first time — a development that will profoundly shape theoretical models and computer-generated forecasts of CMEs for many years to come.

“This is what the STEREO mission was launched to do,” concludes Guhathakurta, “and it is terrific to see it live up to that promise.”

Imagine the impact of CME on Earth without its magnetic shield ( e.g. during the time of poles reversal)

In our daily environment, we encounter matter in three different states: solid, liquid, and gas. In space, a fourth state of matter exists: the plasma state. Plasma is like a gas, with individual particles moving freely under the influence of gravity and collisions. However, the particles in plasmas are charged and move primarily under the influence of electromagnetic forces; space plasmas are usually collisionless.

Plasmas make up 99% of the material in the universe and plasma processes in near-Earth space can seriously affect certain modern technologies. So, it is important to understand the physical processes that occur in plasmas, particularly those processes that occur naturally in space plasmas.  [ Source: http://lasp.colorado.edu/home/science/space-physics/] 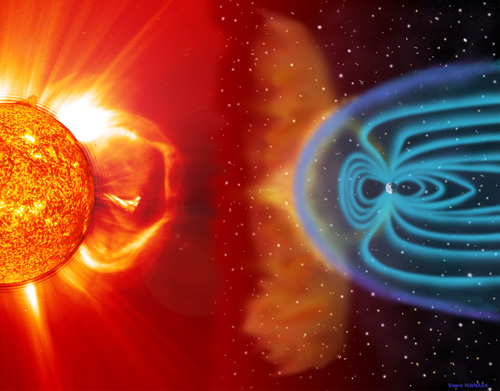