3D printing: What is it, and how does it work?

Three-dimensional printers were all over the news this week, from a plastic printable gun to a live-saving medical device. Here’s a roundup of 3D printers and how they made headlines this week.

So what is it exactly?

Three-dimensional printing — and many insiders prefer the term “making” in order to differentiate from the traditional idea of printing — is at its most basic level the process of creating a digital 3D design, then slicing that design into layers and printing those layers one at a time until the final product takes shape.

Everything from the soles of running shoes to a new coffee cup can be made using this technique.

What are the advantages of 3D printing over traditional manufacturing?

Traditional manufacturing typically requires large blocks of material such as steel, which is then cut away using a CNC machine or a lathe to create the final product. As a result there is a much larger amount of waste than with 3D printing, which leaves behind almost no waste material whatsoever.

Other traditional forms of manufacturing, such as tool and die, require forms to be built which then hold the liquid raw material as it is poured in and allowed to cool — a process that typically requires large machinery, workshops and assembly-line support.

Three-dimensional printing, by contrast, can be done in anyone’s garage or basement, often with a microwave-sized device.

As a result, some experts have compared the advent of the 3D printer to the invention of the home computer or the online search engine — forecasting that it will change the world of manufacturing.

How can I get one?

Hobbyist-sized versions can be purchased directly from manufacturers such as Cubify and MakerBot, and Staples announced it will begin selling 3D printers on its website and eventually in stores.

How 3D printers are making headlines

This week, doctors saved a baby using a device made on a three-dimensional printer, NASA announced it is investing in 3D food-printing technology and a U.S. company was forced to remove plans for a working 3D printable handgun from its website.

In short, the technology that was virtually unheard of a couple of years ago — except among ultra-nerdy tech circles and in sci-fi book clubs — is now making headlines around the world on an almost daily basis.

The University of Michigan announced Wednesday that Dr. Glenn Green and Scott Hollister, who holds a Ph.D, had successfully designed and printed a tracheal splint for Kaiba, a 20-month-old baby boy. Kaiba had a rare condition known as severe tracheobronchomalacia, which caused him to stop breathing on a regular basis and require resuscitation daily.

The splint was printed from a biopolymer material called polycaprolactone, and was modeled directly from a CT scan of Kaiba’s trachea. The final product was sewn around the infant’s “airway to expand the bronchus and give it a skeleton to aid proper growth.”

“Over about three years, the splint will be reabsorbed by the body,” said a news release from the university.

NASA announced this week it is working with a Texas company to design, build and test a food printer that could work in space.

Theoretically, a meal could be printed in the shape of chicken wings, or a roast beef dinner with all the trimmings. Astronauts could order up the meal they want, and the printer would create it on demand.

“The 3D printing system will provide hot and quick food in addition to personalized nutrition, flavor and taste,” the company wrote in its proposal to NASA.

“The biggest advantage of 3D printed food technology will be zero waste, which is essential in long-distance space missions.”

Many people are familiar with the work of M.C. Escher. We have all learned to appreciate the impossibilities that this master of illusion’s artwork presents to the layman’s eye. Many of the so-called ‘impossible’ drawings of M. C. Escher can be realized as actual physical objects, Prof. Gershon Elber of Technion’s Faculty of Computer Science has done just this. His research team has developed a unique CAD application for designing “impossible” 3D objects, with the 3D printer in Technion’s Faculty of Architecture and Town Planning The Belvedere comes to life in a 3D model. All M.C. Escher works (C) the M.C. Escher Company B.V. – Baarn – the Netherlands. Used by permission. All rights reserved. More about Prof. Elber’s work at: http://www.cs.technion.ac.il/~gershon…

Earlier this month, a university student named Cody Smith successfully designed, printed – and fired – a plastic gun he created on a 3D printer. He named it “The Liberator.”

Then Smith posted plans for the weapon online, allowing anyone to download the specs and create their own firearm, provided they had access to the $8,000 Stratasys Dimension SST 3D printer.

His work inspired another “maker” to come up with plans for printable shotgun shells, which were then fired from Smith’s gun.

It was all too much for the U.S. State Department, which this week blocked Smith from distributing the plans.

“#DEFCAD has gone dark at the request of the Department of Defense Trade Controls,” stated a Tweet from Smith’s company. “Take it up with the Secretary of State.”

Still, the move came after the plans had already been downloaded more than 100,000 times, according to reports.

Cody R Wilson has figured out how to print a semi-automatic rifle from the comfort of his own home. Now he’s putting all the information online so that others will join him.
—
This is a story about the rapid evolution of a technology that has forced the American legal system to play catch up. Cody Wilson, a 25 year old University of Texas Law student, is an advocate for the open source production of firearms using 3D printing technology. This makes him a highly controversial figure on both sides of the gun control issue. MOTHERBOARD sat down with Cody in Austin, Texas to talk about the constitution, the legal system, and to watch him make and test-fire a 3D-printed gun.

Check out our podcast with Cody here: http://bit.ly/VICE-Podcast-Cody-Wilson

The successful firing of the world’s first plastic gun made with 3D printing technology, has brought immediate calls for a ban on so-called “undetectable weapons.”

The gun, called “The Liberator”, was made and developed in Austin, Texas by a non-profit organization called Defense Distributed, which claims its purpose is to “produce and publish information related to the 3D printing of firearms.” 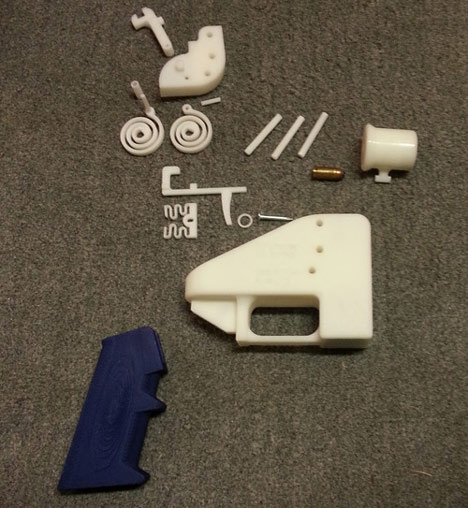 The weapon was made with a 3D printer bought on eBay for just $8,000, and constructed by assembling 15 printed components made from ABS plastic. According to the BBC, which witnessed the weapon’s first test, only the 16th piece, the firing pin, is made from metal.

While Defense Distributed sees its guns as a way for people to defend themselves, at least one U.S. lawmaker wants the weapons to be made illegal.

“Guns are made out of plastic, so they would not be detectable by a metal detector at any airport or sporting event,” Schumer told reporters. “Only metal part of the gun is the little firing pin and that is too small to be detected by metal detectors, for instance, when you go through an airport.”

“A terrorist, someone who’s mentally ill, a spousal abuser, a felon can essentially open a gun factory in their garage,” Schumer added.

The weapon can fire a .380 handgun round, but Forbes, which was on hand for the firing, claimed a larger 5.7×28 rifle cartridge was tested, and blew apart The Liberator.

3D printing technology is seen as one future direction for manufacturing. Typically, it takes a digital representation of an object, and recreates it physically by laying down thin layers of material, usually plastics, until the digital file is literally printed in three dimensions.

The object could be an iPhone case, a simple tool, a high-capacity magazine, or if Defense Distributed has its way, all the parts for a single-use firearm. The notion behind 3D printing is that as sophisticated printers become more affordable, consumers can download designs at home for the goods they might otherwise purchase, and “manufacture” these goods themselves.

Forbes explained the technical process for creating the weapon on a 3D printer: “Fifteen of its 16 pieces have been created inside an $8,000 second-hand Stratasys Dimension SST 3D printer, a machine that lays down threads of melted polymer that add up to precisely-shaped solid objects just as easily as a traditional printer lays ink on a page.”

The 25-year-old head of Defense Distributed, Cody Wilson, a law student at the University of Texas who claims the project is “about liberty,” told the BBC that most people “weren’t expecting that this could be done.”

“There is a demand of guns — there just is. There are states all over the world that say you can’t own firearms — and that’s not true anymore.

“I’m seeing a world where technology says you can pretty much be able to have whatever you want. It’s not up to the political players any more.”

The gun is also the “first” 3D printed gun in just the most technical sense, as there are have been designs for single-use guns and gun components for years. However, the Liberator can be manufactured entirely in the 3D printer (with the exception of the small firing pin) and is reusable.

The RCMP says it has been monitoring the technology, and stressed there could be legal implications to using it.

“It is illegal to manufacture or possess a firearm without appropriate licences and applicable registrations,” warned RCMP spokesperson Julie Gagnon in a statement. “If law enforcement found an individual in possession of a 3D printer-manufactured firearm or parts of a firearm (e.g. magazines, barrels), without appropriate licences and registration, the firearm could be seized and the individual charged.”

Tony Bernardo, the acting director or the Canadian Shooting Sports Association, said the ability to produce printable firearms won’t be a problem for Canadians.

“It’s a total non-issue,” Bernardo said. “People have been making firearms by hand for 400 years. Many of the firearms that were used in World War I were produced in factories that didn’t even have electricity.”

Nonetheless, experts acknowledge the introduction of firearms and firearm components to 3D printing technology could make their acquisition easier.

The BBC asked Wilson if he felt any sense of responsibility about who might get access to a 3D gun, he agreed guns might be used to harm people.

No one from Defense Distributed was available for comment to Postmedia News, but its website makes clear the role it is playing in the highly charged U.S. gun debate.

“This project might change the way we think about gun control and consumption,” its website reads. “How do governments behave if they must one day operate on the assumption that any and every citizen has near instant access to a firearm through the Internet? Let’s find out.”

Errol Mendes, a professor of law at the University of Ottawa, says no specific law in Canada covers 3D guns.

“Because the technology is so new, I would be surprised if there was any law that regulated it,” Mendes said. But he added, “if there is an ability to actually 3D print prohibited weapons, then yes, one could be charged with importation of prohibited weapons.”