A five-kilometre wide asteroid is zipping past Earth this week, giving stargazers a show and doomsayers a bit of a scare.

The hunk of rock, dubbed 4179 Toutatis, made its closest approach during the early hours of Wednesday morning, getting within 6.9 million kilometres of our planet, or approximately 18 times the distance between the Earth and the moon.

Anyone with a moderate to large backyard telescope will be able to see the asteroid over the next few days, as it passes through the constellations of Cetus and Pisces.

Several websites are tracking the asteroid as it flies by. The Slooh Space Camera project is providing a live view of the asteroid on its website, streaming from observatories in Arizona and the Canary Islands, off the coast of Africa.

The Bellatrix Astronomical Observatory, located in Ceccano, Italy, is also offering a live stream as part of the Virtual Telescope Project.

The lumpy, elongated rock has an unstable orbit, circling the sun in a looping oval that ranges from just inside Earth’s orbit to well beyond Mars.

First sighted in 1934, Toutatis has frequently been making close approaches to Earth, nearing the planet’s vicinity every four years since its formal discovery in 1989. It came particularly close in 2004 — about four times the distance between the Earth and the moon.

Because of its orbit and its frequent near-approaches, Toutatis is classified as a potentially hazardous asteroid.

“This [most recent approach] has gotten tied up in some people’s minds with the Mayan calendar and the world ending,” Alan MacRobert, senior editor at Sky and Telescope Magazine, told the Boston Globe.

“It’s not going to end the world.”

Astronomers predict that eventually, Toutatis will be flung either into the Sun or completely out of the solar system by Jupiter’s orbit.

There is also the possibility that it may some day collide with the Earth — but astronomers say that likely won’t happen for at least another 600 years.

Of course, Toutatis is much bigger than this minimum size required for PHAs. We’re lucky it’s not on any sort of collision course with Earth for hundreds of years into the future, if not much much longer. In fact, it’s very likely this object has been passing Earth’s orbit every four years for billions of years. It’s likely it’ll continue to do so, harmlessly, for billions of years more.

By the way, another asteroid also passed close this week – designated 2012 XE54. This little space rock is estimated to be only between 50 and 165 feet across (15-50 meters). Although it would cause some damage if it struck earthly land, the damage would be local – not regional – and thus 2012 XE54 isn’t big enough to be categorized as a PHA. 2012 XE54 passed Earth on the same day as Toutatis, December 11, but earlier in the day. 2012 XE54 had been found one day before its closest approach to Earth. Traveling at a speed of 13 kilometers per second, it passed only only 139,500 miles (224,503 kilometers) away, or slightly more than half the moon’s distance (0.6 lunar distances).

When will the large asteroid 4179 Toutatis pass as close to Earth again as it did on December 11-12? According to Universe Today:

Next time Toutatis will approach at least this close to Earth is in November of 2069 when the asteroid will fly by at a distance of only 0.0198 AU (7.7 lunar distances).

Bottom line: Asteroid 4179 Toutatis passed within 18 lunar distances – about 4 million miles – on the night of December 11-12, 2012. Here are some images and videos from that passage.

On Feb. 15th an asteroid about half the size of a football field will fly past Earth only 17,200 miles above our planet’s surface. The space rock, designated “2012 DA14”, has NASA’s attention. “This is a record-setting close approach,” says Don Yeomans of NASA’s Near Earth Object Program at JPL. “Since regular sky surveys began in the 1990s, we’ve never seen an object this big get so close to Earth.”

– the impact of a 50-meter asteroid created a mile wide crater known as “Meteor Crater” in Arizona when it struck about 50,000 years ago. Also, in 1908, something about the size of 2012 DA14 exploded in the atmosphere above Siberia, leveling hundreds of square miles of forest. Researchers are still studying the “Tunguska Event” for clues to the impacting object.

NASA radars will be monitoring the space rock as it approaches Earth closer than many man-made satellites.

The asteroid will thread the gap between low-Earth orbit, where the ISS and many Earth observation satellites are located, and the higher belt of geosynchronous satellites, which provide weather data and telecommunications.

NASA’s Goldstone radar in the Mojave Desert is scheduled to ping 2012 DA14 almost every day from Feb. 6th through 20th. The echoes will not only pinpoint the orbit of the asteroid, allowing researchers to better predict future encounters, but also reveal physical characteristics such as size, spin, and reflectivity. A key outcome of the observing campaign will be a 3D radar map showing the space rock from all sides. 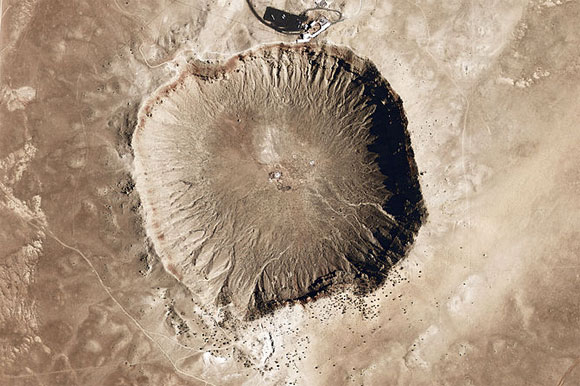