Not far from the city walls among the well-trimmed orchards, there lies a crypt buried in darksome pits. Into its secret recesses a steep path with winding stairs directs one, even though the turnings shut out the light… and when, as you advance farther, the darkness as of night seems to get more and more obscure throughout the mazes of the cavern, there occur at various intervals apertures cut in the roof which convey the bright rays of the sun upon the cave. Although the recesses, twisting at random this way and that, form narrow chambers with darksome galleries, yet a considerable quantity of light finds its way through the pierced vaulting down into the hollow bowels of the mountain.  And thus throughout the subterranean crypt, it is possible to perceive the brightness and to enjoy the light of the absent sun… — Peristphanon 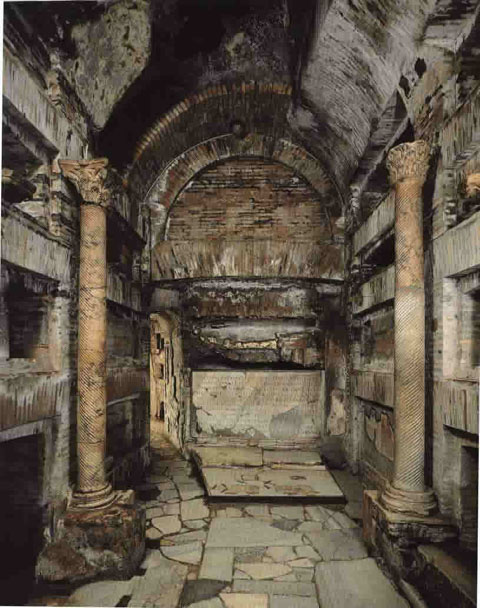 Though one rarely thinks of death when walking the beautiful streets of Rome, there lies not far from the ancient city a collection of catacombs so large that they were once believed to act as religious meeting places for persecuted Christians. Dating as far back as the 1st century, Roman catacombs were built to house the dead. Both those who practiced Judaism and those who practiced the growing Christian religion believed in the preservation of the physical body. Partly due to the rise in these religions we see we see a shift from cremation around the 1st century CE and witness the development of the catacombs surrounding Rome. The catacombs were initially located outside of the city, because of Roman laws making it illegal to bury the dead within the city proper.

Originally these growing religions bought private land near but outside of the city to erect tombs for their dead. Around the 2nd century, these locations began to reach capacity. It was then that the catacombs began to evolve. Although burials on the sight of many existing catacombs initially took place in above ground tombs, room was expanded through excavation of the surrounding earth once the tombs reached capacity.

Much of the area surrounding Rome consists of tuff. This soft volcanic stone offered early Romans the perfect terrain for the formation of catacombs. The soft tuff allowed for easy digging and both Jewish and Christian communities established catacombs on their private land near the city with the intention of preserving their communal identities while ensuring that all members of their respective congregations were afforded a proper burial.

Those interested in the construction of the catacombs or the surrounding geology will note that the ground surrounding the catacombs consists of layers which can include compact tuff, lithoid tuff (which is harder and makes digging more challenging but also acts as a wonderful material for building), as well as fine pozzolana.

Although the tuff into which the catacombs were dug is initially soft, it becomes solid and stable when exposed to the open air. Also, lithoid tuff was often removed from areas surrounding burial sites to be used in the construction of tombs and the early levels of the catacombs. These pits where then easily converted into burial chambers as excavation moved to lower depths.

When visiting the Roman catacombs, one generally enters through a staircase located in an atrium or large chamber. One then proceeds to a main passageway that is intersected by a series of corridors. Additional corridors and levels were added as the need for space increased. Although many catacombs are only one or two levels deep, one can find up to five levels within a particular catacomb.

The construction and decoration within a catacomb offers information about the status of its occupants. Wealthy individuals were often laid to rest in large crypts with domes or arcosolia (arches) baring mosaics and once colorful frescos. Many of these artistic renderings depict religious scenes and/or images of the deterred individual. These areas are clearly more intricately decorated and are more likely to exhibit marble elements.

Although some exists, you will find fewer and less elaborate catacombs for those practicing pagan rituals. Roman pagans tended to prefer more intimate burial tombs than one finds among the Jewish and Christian catacombs. Most Jewish catacombs consist of one or two levels, while Christian catacombs may extend to four of five layers.

You will note that the galleries of the catacombs may extend for many layers. The ceilings of these galleries are covered with flat or vaulted ceilings. Although one would expect these deep passageways to be dark and ominous, many of the openings made to remove the excavated earth were adapted to allow light and air to reach several levels below the surface of the soil.

Chambers or cubicula were established for wealthy individuals off the galleries of the catacombs. Originally many of the chambers within the catacombs were sealed with large marble slabs. However, as the catacombs expanded, many of these chambers were connected as construction broke through dividing walls and marble sealing slabs.

Less wealthy individuals were buried in small oblong niches called loculi. These loculi were carved one above another and were organized into vertical rows for the height of the corridors. Loculi line both sides of many passageways. Small loculi were dug for children and infants. The average size for an adult loculi measured 6 feet in length, one foot in height, and one-and-a-half foot in depth. These loculi would be sealed with marble or tile and covered over with plaster depending upon the catacomb.

Within the Jewish catacombs, loculi would hold only one body unless they were used for children. However, even in this case, bodies were separated by vertical tiles of a masonry divider. This strict division of bodies followed Rabbinic instruction what forbade the mingling of bodies within a single grave.  In Christian catacombs, however, one may find several bodies interred within a single loculi.

Another architectural aspect of catacombs worth note is the arcosolia or arched niches that are often carved into the walls of the Roman catacombs.  These spaces are generally larger than locoli and can be found in both chambers and galleries. You will often find trough or trench graves cut into the floor beneath the arcosolia. Benches, shelves, or a casket may also be found laid beneath these spaces.

The Catacombs of Rome are ancient catacombs, underground burial places under or near Rome, Italy, of which there are at least forty, some discovered only in recent decades. Though most famous for Christian burials, either in separate catacombs or mixed together, they began in the 2nd century, much as a response to overcrowding and shortage of land. Many scholars have written that catacombs came about to help persecuted Christians to bury their dead secretly. The soft volcanic tuff rock under Rome is highly suitable for tunneling, as it is softer when first exposed to air, hardening afterwards. Many have kilometres of tunnels, in up to four stories (or layers).

There are at least 40 catacombs in and around Rome depicting how burial for early Christians, Pagans and Jews in Rome worked.