The Plain of Jars is a megalithic archaeological landscape in Laos. Scattered in the landscape of the Xieng Khouang plateau, Xieng Khouang, Laos, are thousands of megalithic jars.  These stone jars appear in clusters, ranging from a single or a few to several hundred jars at lower foothills surrounding the central plain and upland valleys. Several theories propose that the jars were used as funerary urns, while local legend suggests they were drinking vessels for the giants who used to inhabit the area. We’re sure there’s a sensible, perhaps even logical, explanation to the Plain of Jars… we just don’t want to know what it is.

The mystery of the stone jars in Eastern Laos

Hundreds of large stone jars lie scattered across an elevated plateau of rolling grassland, to the south and west of Phonsavan in Laos. The origin and purpose of these huge, mysterious jars is unclear, but it is generally accepted that most date back at least 2000 years. They range between one and three metres long, and each weigh several tons.

Not to be confused with stone lids are the stone discs. The stone discs have at least one flat side and are grave markers which were placed on the surface to cover or mark a burial pit. These gravemarkers appear more infrequently than stone jars, but are found in close proximity. Similar are stone gravemarkers; these stones are unworked, but have been placed intentionally to mark a grave.

The jars lie in clusters on the lower footslopes and mountain ridges of the hills surrounding the central plateau and upland valleys. Several quarry sites have been recorded usually close to the jar sites. Five rock types are known:sandstone, granite, conglomerate, limestone and breccia.

The majority of the jars are sandstone and have been manufactured with a degree of knowledge of what materials and techniques were suitable. It is assumed that Plain of Jars’ people used iron chisels to manufacture the jars although no conclusive evidence for this exists. Regional differences in jar shape have been noted. While these differences in most cases can be attributed to choice and manipulation of rock source, form differences, such as small apertures and apertures on both ends (double holed jars) which would affect the use of the jar have been recorded in one district only.

The cave at Site 1 is a natural limestone cave with an opening to the northwest and two man-made holes at the top of the cave. These holes are interpreted as chimneys of the crematorium. French geologist and amateur archaeologist Madeleine Colani excavated inside the cave in the early 1930 and found archaeological material to support a centralized crematorium theory. Colani also recorded and excavated at twelve Plain of Jars sites and published two volumes with her findings in 1935.

The material findings and context led her to the interpretation of the Plain of Jars as an Iron Age burial site. 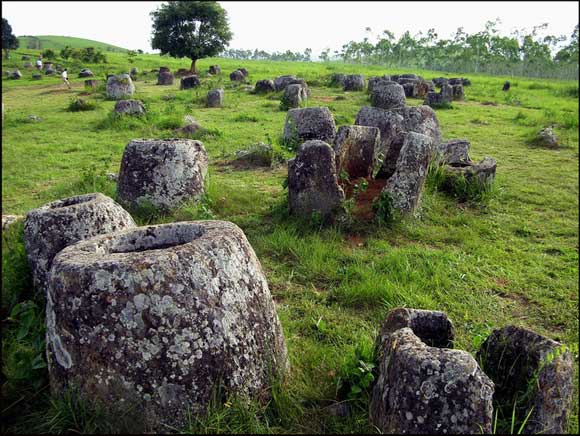 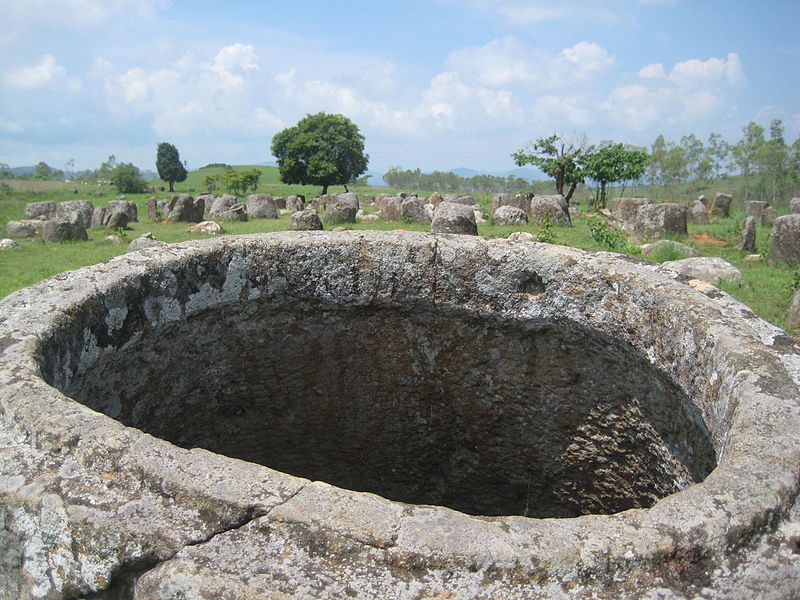 Plain of Jars – Site One 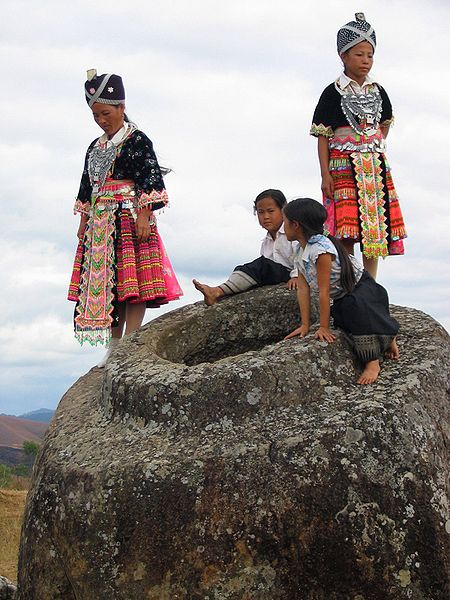 Hmong Girls climbing on one of the jars at Site 1