The Lost Empire of Hittites

Around 5000 BC, the region centered in Hattusa, become the core of the Hittite kingdom. The Hittites were an ancient Anatolian people, who established an empire at Hattusa in north-central Anatolia around the 18th century BC. This empire reached its height during the mid-14th century BC under Suppiluliuma I, when it encompassed an area that included most of Asia Minor as well as parts of the northern Levant and Upper Mesopotamia. 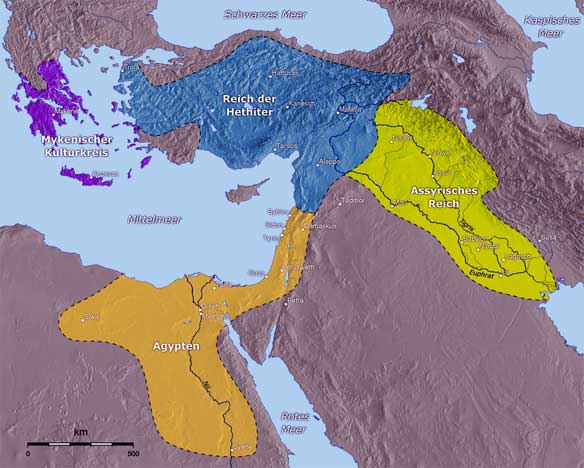 The Hittite Empire is shown in Blue.

The Hittite language was a member of the Anatolian branch of the Indo-European language family. Natively, they referred to their land as Hatti, and to their language as Nesili (the language of Nesa). The conventional name “Hittites” is due to their initial identification with the Biblical Hittites in 19th century archaeology.  The history of the Hittite civilization is known mostly from cuneiform texts found in the area of their kingdom, and from diplomatic and commercial correspondence found in various archives in Egypt and the Middle East.

The Lords of Hattusa

Hattusa’  was the capital of the Hittite Empire. The site is located near the modern-day town and district center of Bo?azkale,  in Çorum Province in north-east Central Anatolia, Turkey, at a distance of 90 km from the province seat of Çorum. The region is set in a loop of the K?z?l River (”Marashantiya” in Hittite sources and Halys in Classical Antiquity) in central Anatolia, about 200 km (125 miles) east of Ankara.Hattusa was added to the UNESCO World Heritage list in 1986.

Watch this incredible story of the lost civilization:

Here are the remaining episodes:

It is generally assumed that the Hittites came into Anatolia some time before 2000 BC. While their earlier location is disputed, there has been strong evidence for more than a century that the home of the Indo-Europeans in the fourth and third millennia was in the Pontic Steppe, present day Ukraine around the Sea of Azov.

Before the discoveries, the only source of information about Hittites had been the Old Testament. Francis William Newman expressed the critical view, common in the early 19th Century, that, if the Hittites existed at all, “no Hittite king could have compared in power to the King of Judah…”. 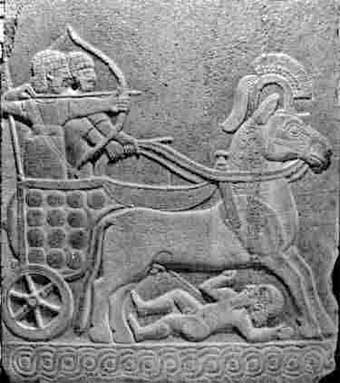 As archaeological discoveries revealed the scale of the Hittite kingdom in the second half of the 19th Century, Archibald Henry Sayce postulated, rather than to be compared to Judah, the Anatolian civilization “[was] worthy of comparison to the divided Kingdom of Egypt“, and was “infinitely more powerful than that of Judah”. Sayce and other scholars also mention that Judah and the Hittites were never enemies in the Hebrew texts; in the Book of Kings, they supplied the Israelites with cedar, chariots, and horses, as well as being a friend and allied to Abraham in the Book of Genesis.

The first archaeological evidence for the Hittites appeared in tablets found at the Assyrian colony of ancient Karum Kanesh, containing records of trade between Assyrian merchants and a certain “land of Hatti”. Some names in the tablets were neither Hattic nor Assyrian, but clearly Indo-European. 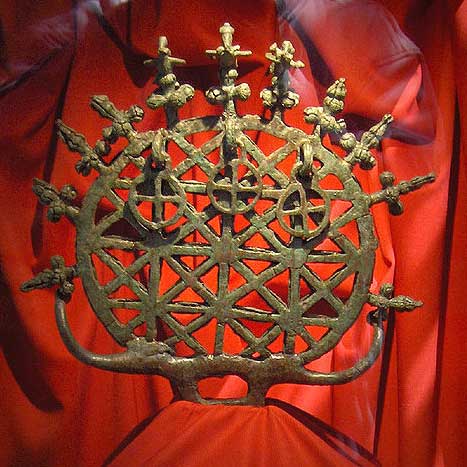 Bronze religious standard symbolizing the universe, used by Hittite priests, from the Museum of Anatolian Civilizations.
Notice its resemblance to the Flower of Life 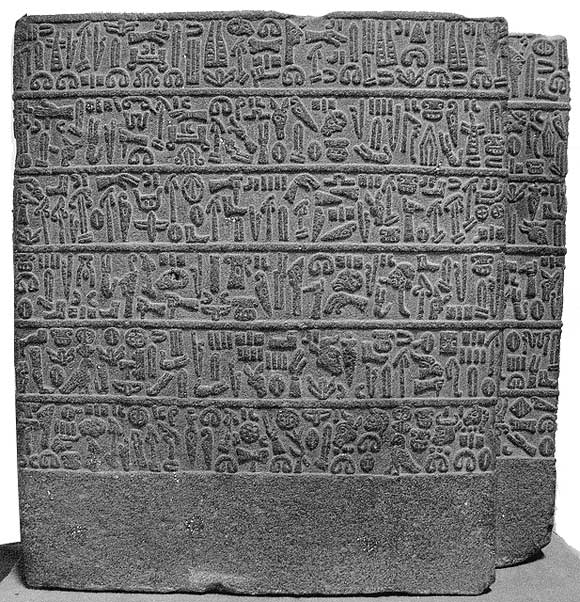 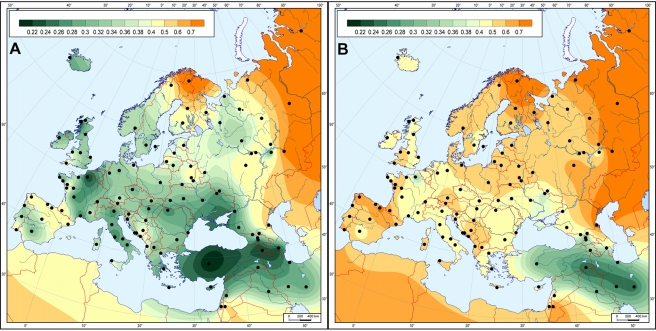 Genetic distance maps presented by Haak et al. (2010) that show affinities between modern populations and Neolithic LBK samples. Peak values in the Caucasian region are notable and indicative of a Caucasian origin.

The European Mesolithisation of a Caucasian Neolithic, or the Origin of the Indo European Language family

PS2 The Cuneiform Tablets from Hattusa

Large library of clay tablets discovered near Hattusa (Turkey) was written in cuneiform which was untranslatable for decades because everyone was looking for a way to translate it into Shemetic.
It turned out that correct translation became possible after one of the scholars noticed the word agua with the meaning to drink and after agua it used the word watar.  It become evident that Hettites used cuneiform writing of ancient English
Stupidly scholars think this means in 1640bc the English came and conquered the  Hittites instead of seeing these were our forefathers whose language was changing into English while they still wrote with a stick into clay in cuneiform alphabet. This is why it is important to see Stonehenge as a 56-year Armageddon countdown from 1554bc Jan 4 to January 1975 AD. 2472am to year 6000am.

Long time ago i found a paperback in a library or at the Chicago Planetarium and it mentioned the date 1554bc exactly January 4. The result is my finding out it fits original Armageddon countdown calendars (before altered).
So though they think hundreds of years passed by until they go into 3rd phase in 1554bc i see it as the one and only date and year for building the whole thing.

Doesn’t mean English went over to conquer Turkey. It means English came from Hattusa Turkey. Moses was 40 and killed the Egyptian in this year. And since China was not founded until 1437bc it means the world was spread from India to Stonehenge at that time 816 years after the Flood. 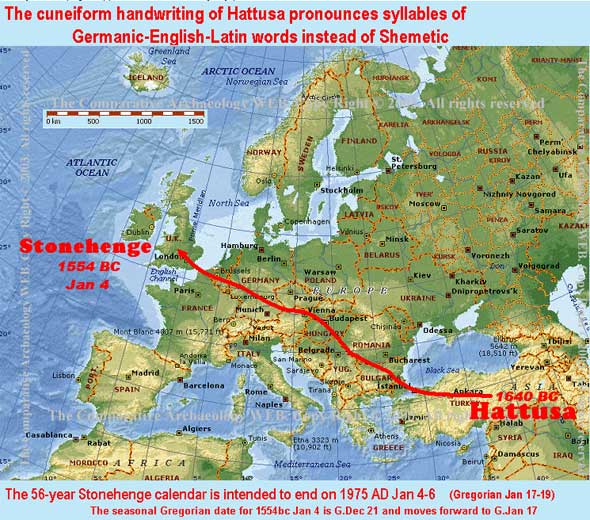 I have some animated English related to the Genesis timeline starting with the name Terah which in English means earth, and he was born in 2148bc. Then Shulgi whose name Dungi means crap in 1991bc, then AmarPal whose name AmarSin (Sin for the moon) is error and corruption in 1943bc, and we find this text of this YouTube in 1640bc with the English word Water, the Latin word Aqua, the German word ezzat (eat) even though they are writing this English with a cuneiform stick on clay. 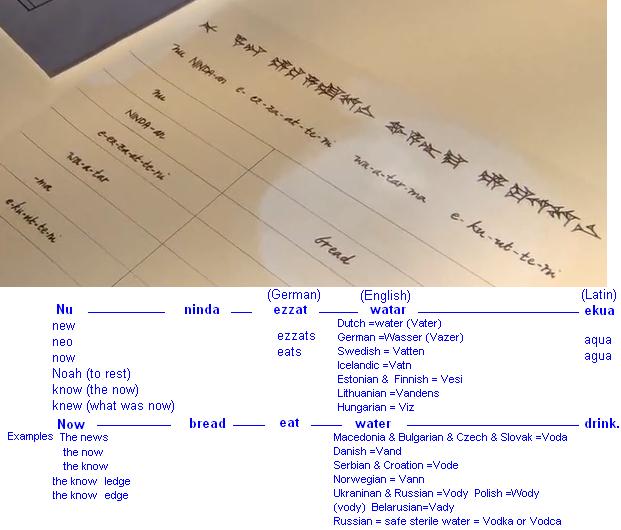