Hagia Sophia is one of the most important buildings in the world. Few other buildings are still in use from the 6th century. Can you name any other ones? And let’s exclude Stonehenge and other structures, which are open to the elements and therefore not buildings in their common meaning.

The original Hagia Sophia church, the present building is the third, was inaugurated on the site of the current building on the 15th February 360. It was the largest church in the new capital of the Roman Empire, Constantinople.

Both the Church of the Holy Sepulchre in Jerusalem, constructed at a similar time, in 326-330, and Old St. Peter’s in Rome, constructed 330-360, have original and extensive underground areas. The Church of The Holy Sepulchre in Jerusalem, a church built at the order of Constantine, has multiple underground areas, including the Tomb of Jesus and an underground Chapel of Adam. St Peter’s in Rome includes the underground tomb of St Peter and the catacombs within its boundaries. A crypt is a common and intrinsic part of the design of a great church. If a leading Christian figure is not buried there, then martyrs and saints are. 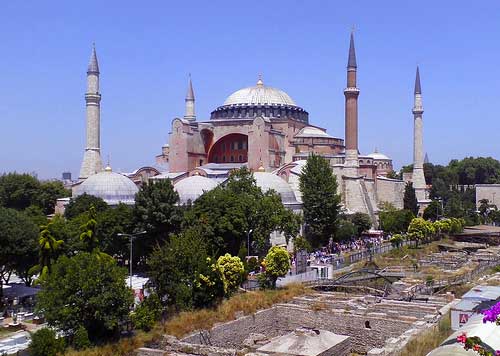 Hagia Sophia July 2011 with ruins of Constantine’s Great Palace in the foreground. Photo by Laurence O’Bryan 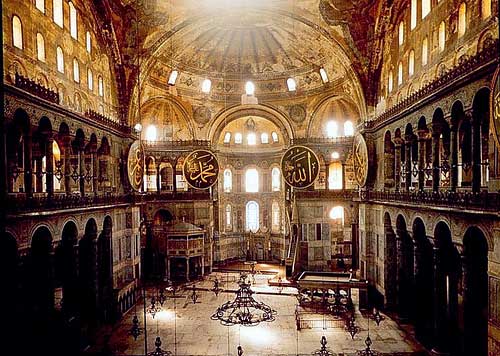 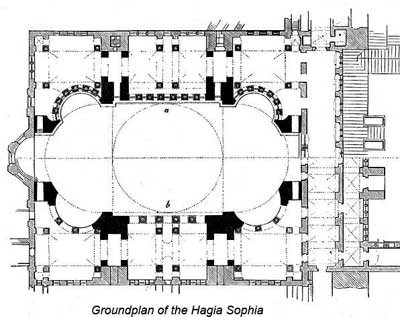 And the underground areas are the most sacred parts of these buildings. It seems odd to me that there are no underground areas that the public is aware of, aside from a few drainage tunnels, under Hagia Sophia.

One possible explanation, of course, is that the ground Hagia Sophia is built on is unsuitable for underground construction. But that argument is blown out of the water, literally, by the existence of the Basilica Cistern, 150m away from Hagia Sophia. The Basilica Cistern is one the largest and most extensive ancient underground sites in the world. It is a vast underground chamber of almost 10,000 square metres containing a forest of 336 marble columns, each 9 metres high. 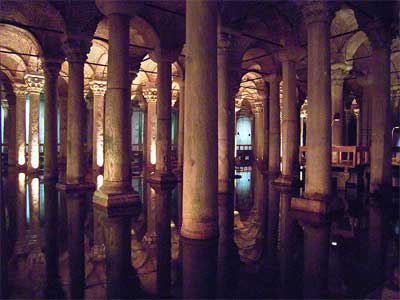 So did the famous designers of Hagia Sophia, physicist Isidore of Miletus and mathematician Anthemius of Tralles, (known for constructing flood defences) simply forget to design underground levels for Hagia Sophia? Did these architects ignore one of the most prominent features in the churches Hagia Sopha was in competition with? Or is there another explanation, were the underground areas in Hagia Sophia hidden later?

Hagia Sophia fell to the Ottoman Turks when the city around it, Constantinople, fell on the 29th of May 1453. The fate of the city was long expected. In the Summer of 1452 the last Emperor, Constantine X1, wrote to the Pope in Rome offering to submit the Greek Orthodox faith to Catholicism, so great was the expectation that Constantinople would fall without the aid of the West.

So why would underground areas be sealed in Hagia Sophia?

First, they may have held the last treasures of the Greek Orthodox faith. Hagia Sophia was looted in 1204 by the Fourth Crusade, but it was rebuilt and many Orthodox relics would have been gathered there after it’s restoration to the Orthodox Church in 1261. The Greek Orthodox Church at that time believed in the mystical powers of relics and icons. The parading of icons on walls and prayers to them in great churches was commonly believed to have saved many cities. There is every reason to believe that important relics would have been kept in Constantinople until the last minute in 1453 in the hope that their mystical powers might bring about a miracle. But it was not to be, despite religious ceremonies taking place in Hagia Sophia right up until the last moment when the Ottoman’s stormed the building.

The second reason the underground areas may have been sealed is not, however, due to the fall of the city.

The Black Death was one of the most destructive epidemics ever to strike humanity. It raged in Europe around the year 1350. Constantinople was one of the largest cities on the European continent. It fell victim to the Black Death early, in 1347, probably due to maritime contacts with the Crimea, which was under siege then by the Mongols. 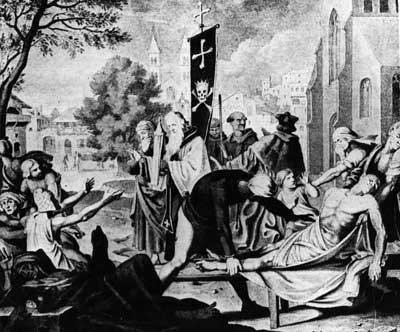 It is reported that over fifty percent of the population died, including a son of the then Byzantine Emperor.

One of the first places to be used to bury victims, especially senior members of the clergy and the aristocracy would have been in any underground crypts in the Hagia Sophia complex. This complex included Hagia Eirene, an even older Church, and the hospital of Sampson, where some underground areas have been revealed south of Hagia Eirene, within metres of Hagia Sophia.

It was common practice in the Orthodox Church to bury high ranking individuals in church crypts. I suggest therefore that any original crypts under Hagia Sophia may have been used for the burial of prominent plague victims. Such crypts would then have been sealed up, for obvious reasons.

Mehmed the Conqueror’s Sufi instructor, Ak Semseddin was a physician as well as a mystic poet. Ak Semseddin preached the first Friday sermon at the former cathedral of Hagia Sophia after it was converted into a mosque. He would have understood the consequences of digging up the plague pits under Hagia Sopha and would have been well placed to persuade Mehmed not to search too hard under Hagia Sophia.

The question for us, and for future generations, is this. Are we prepared to search under Hagia Sophia, despite the fact that we may unearth a Black Death plague pit?

A proper modern investigation, a geophysical survey using ground penetrating radar and the latest magnetometer equipment would likely reveal significant underground areas at Hagia Sophia. So far the Turkish authorities have not permitted such a project.

It is true that there has been some limited small-scale explorations under Hagia Sophia, a few narrow tunnels and cisterns have been discovered, but isn’t it time for the whole area to be properly explored and documented? The publicity, and increase in tourists alone, would justify the costs. What is everyone afraid of? Hagia Sophia has been a museum for seventy five years.

Now is the time, as Turkey continues its slow progress towards membership of the EU, to appeal to the Turkish authorities to permit a modern investigation of the likely underground areas at Hagia Sophia. We don’t know what they will find. But it is certainly possible that there is something significant down there.

The author of this piece, Laurence O’Bryan, is a mystery writer. His first novel came out January 19 2012. It will be translated into 8 languages. It is called The Istanbul Puzzle. No prizes for guessing what building features in The Istanbul Puzzle. 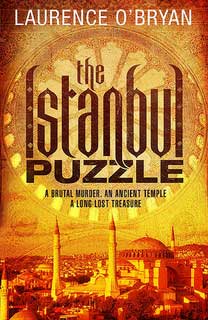 An electrifying conspiracy thriller which will entice fans of Scott Mariani, Sam Bourne and Dan Brown.

Buried deep under Istanbul, a secret is about to resurface with explosive consequences! Alex Zegliwski has been savagely beheaded. His body is found hidden near the sacred archaeological site of Hagia Sophia in Istanbul. When Sean arrives in the ancient city to identify his colleague’s body, he is handed an envelope of photographs belonging to Alek and soon finds himself in grave danger. Someone wants him dead but why? Aided by British diplomat Isabel Sharp, Sean begins to unravel the mystery of the mosaics in the photographs and inch closer to snaring Alek’s assassin. Evil is at work and when a lethal virus is unleashed on the city, panic spreads fast. Time is running out for Sean and Isabel. They must catch the killer before it’s too late.