Therefore, we are disclosing personally to you just the tip of the iceberg when it comes to Giza and, in particular to Cheops. For if the Great Pyramid of Giza is the ultimate ALTAR UNTO THE LORD AT THE BORDER (GIZA) OF EGYPT (Isaiah 19:19-20) – then shall not the GPG expend those energies to declare submission – NOT TO THE EGYPTIAN ROYAL CUBIT – but to the 2.1-Foot / 25.20” Sacred Cubit of the Ancient of Days?

The same can be said of Jericho’s encirclement seven times on the seventh day and of the “palm of a hand sent from Him” upon the wall spelling out King Belshazzar’s demise monetary writing clearly understood: Mene (1,000) + Mene (1,000) + Tekel (20) + Upharsin (500) = 2,520 – “MENE: God has numbered your kingdom, and finished it; TEKEL: You have been weighed in the balances, and found wanting; PERES: Your kingdom has been divided and given to the Medes and Persians” (Daniel 5:24-28).

Likewise, we will under separate mail send you our article connecting Giza, Stonehenge, the Mayan Long Count Calendar, the Bush and Clandon Barrow Lozenges (golden plates found in Southwestern Britain), the New Jerusalem and, you guessed it, the UNION JACK – that will floor you! But first….

It is our hope that this brief but, hopefully, convincing article on the Sacred Cubit’s intrusion into ancient metrology will have the desired effect of penetrating the thinking of your audience – but, allow us the courtesy to declare the Greatness of the Lord in the Land of the Pyramids as follows – for the Ra became but the creature, more than the Creator – nevertheless, the Sun of Righteousness shall arise on that Great Day of God (Malachi 4:1-2)…indeed the Great Pyramid of Giza bears the insignia of the Sun of Righteousness in totality!

The New Jerusalem’s measurements, again, are:

and by eliminating zero to the 12, furlongs we have 12 on each of the 12-edged cube for her “length, breath, and height are equal” and she is “laid out as a square…its length is as great as its breadth” (Revelation 21:16-17).

which is the fractal of the Great Precessional of the Constellations at 25,920 Years.

Let us reflect upon Giza’s measurements:

Base Edge of the GPG:

But – since the Sacred Cubit has been given such short shrift – allow us
to expose the GPG for Who He is once and for all! 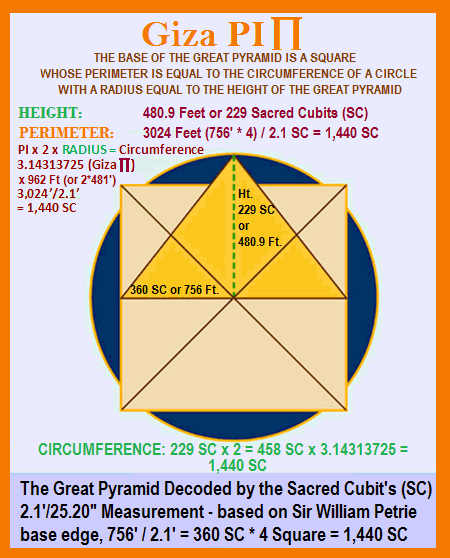 The base perimeter of the GPG’s 1,440 Sacred Cubits.

The 8 souls saved in the Ark of Noah knew of this and that is why we have the OCTAHEDRON – the “8” for:

His platform is altogether obvious under the dominion of the Man with the Measuring Reed/Line in His Hand:

Without the Sacred Cubit the DIAGONALS of the Great Pyramid of Giza are meaningless – to wit: 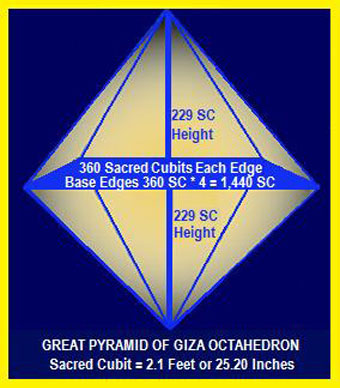 There are a multitude of additional “Sacred Cubit” confirmations over the entire Giza Necropolis and over each of the pyramids – to obfuscate, circumvent and obscure the Dimensions of the Sacred Cubit upon the Giza  Pyramids is a gross oversight and, sad to say, the blatant fear of the TRUTH!

This is the plan and purpose of the Almighty – without the Divinely Inspired Sacred Cubit – NONE of this would be seen, nor possible – not only do the numbers not lie – THEY SPEAK THE TRUTH!

For only by the Sacred Cubit and by the Giza Pi can the real circumference of the famous CIRCLE’S CIRCUMFERENCE BE FOUND:

Relax – the Great Pyramid of Giza isn’t going anywhere too soon or too fast!

I reread Giza Pyramids, Part 2 – and to my great surprise I discovered a most amazing thing relative to its measurements and I am altogether pleased to share this fresh insight with you, having to do with your decoding wherein you state:

Here is another unbelievable “coincidence”:

This so intrigued me …  after all, we’re only decoding the Seventh and only Wonder of the World still standing to declare Himself as the “Altar unto the LORD at the Border (lit. “Giza”) of Egypt (Isaiah 19:19-20).
Now – Alex I wish to express my appreciation for the dissemination of the truth with regards to Giza – we cannot fool around here – for me, I have no monetary interest in this matter whatsoever – but I do feel that a trust has been committed to me and to you as well, and let’s throw in our dear Charles Marcello – learning to “share” is divine, not human (in most cases)…in any event, here goes – and, again, thanks to YOU this truth is now for the first time uncovered for all to marvel at this, the earthly expression of the Sun of Righteousness (read the article and you’ll see why) – but here goes:
I have spoken of the the now INFAMOUS (for it knocks all other PI’s off the mountain) PI known as the GIZA PI.  It was derived by taking the precise measurement of the “entire – not weathered” Great Pyramid of Giza (a.k.a. Cheops) to be that of 480.9 (See:  Islamic Architecture or the brilliant work of Mark Lehner or “the Great Pyramid was 280 Egyptian royal cubits tall (480.9 feet (146 m).”
Having metrologically established such an height (Note:  Not “elevation” in that this connotes height from sea level) as the numerator of the fraction which would ultimately constitute the GIZA PI – I had to determine its denominator and “chanced” upon the ancients’ understanding and the use of “153” – as was the case with Jesus in John 21 and the miracle of the “153 fish” brought to shore by Peter as a metaphor that at the Sea of Galilee (“gal” meaning “CIRCLE”) that he and the disciples would truly become “fishers of men.”  Therefore, the “153” for these reasons was chosen and that its number set as factor give us “15” as in 1 * 5 * 3 = 15 and that those of the correct and most accurate measurement of the Great Pyramid of Giza (GPG) give us “21” as in 4 + 8 + 9 = 21.
The “15” attends to the prime measurement of each of the 12 edges of the New Jerusalem given in Revelation 21:16 wherein 12,000 furlongs/stadia * 660 Feet (1 furlong) = 7,920,000 Feet / 5,280 (1 Statute Imperial Mile) = 1,500 Imperial Miles or “15” per each of the 12 edges of the cubed New Jerusalem or 15 * 12 = 180 or “18” which “18” is the entirety of the 12-edge-linear measurement of the New Jerusalem – the ultimate Purpose of the Almighty.
The “21” attends to the GPG’s immediate grid of 21 x 21 = 441 and, of course, we determined from there using the Sacred Cubit’s 2.1 Feet that 756′ (base edge of the GPG) / 2.1′ = 360 Sacred Cubits and that 360 SC * 360 SC (its base area) = 129,600 Sacred Cubits which looks terribly familiar with your own research seen below (by me for the first time, I hasten to add):

A belief that the ancients held unusual scientific knowledge, of which only fragments remain today, was held by many great philosophers and scientists who participated in the “scientific revolution”. Though research by these men led to great discovery, many were convinced that they were merely scratching the surface of an immense but lost pristine knowledge (prisca sapientia) somehow reflected in the architecture and remains of ancient civilizations. 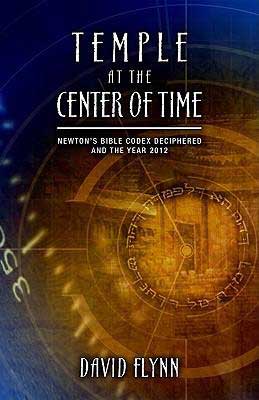 In “Temple at the Center of Time: Investigations of Sacred Dimension, Revealed in Prophecy, the Temple of Jerusalem, and the Ark of the Covenant, from the works of Isaac Newton“, David Flynn uncovers what is sure to be heralded as one of the greatest discoveries of all time.

Many books have investigated whether Newton believed that an original pure knowledge existed. Some conclude that he did in fact search for it, but that is the whole of their investigation. A few have written that Newton actually discovered ‘something’ and try to fit his existing research into a prisca sapientia of their own design, claiming his beliefs fit modern realms of philosophy or eastern religions, but these speculations are not upheld by the body of his work. Although Newton had solved riddles of space, time, gravity, light and invented mathematics to predict the motion of objects, this was not the ‘priscia sapienta’. Since the time of Newton, no one has revealed the true form and nature of the original knowledge, or from whence it came… until now.

For the first time in history, “Temple at the Center of Time” uncovers what Newton was looking for and, in so doing, proves that pivotal events in history are unquestionably connected in time and space to Jerusalem.

Newton didn’t know it. The key was right in front of him.