Stonehenge is a prehistoric monument located in the English county of Wiltshire, about 2.0 miles (3.2 km) west of Amesbury and 8 miles (13 km) north of Salisbury.

The Answer and Key to Stonehenge

An audacious thought that the Brits would be holding the 2012 Olympics – then to have Almighty God turn around and give them this gift – they preserved the Imperial Mile and enclosed it in the Sacred Canon of the King James Version of the Bible – Richard Dawkins is right – let all of cheery England and the Isles read her text for therein are the Words of Eternal Life and if they will not praise Him then their stones will cry out in praise to the Creator from Whom all blessings flow! And how’s about all them crop circles?  Is it coincidental that Stonehenge is smack dab in the middle of Wiltshire County where all the action is?  I don’t think so (to be continued)…the truth is out there….

A ” STONEHENGE TSUNAMI” is rolling its way toward Great Britain to smash all the other theories heretofore concocted by humanity as to WHY STONEHENGE?  The “ancient enigma” awaits its final revelation prior to the arising of the Sun of Righteousness Who comes with “healing in His wings” – and do we ever need healing!

For this is the finest expression of the New Jerusalem – if there ever were one – it is superior to anything we’ve seen – it is absolutely exquisite and it is being revealed to us in these bitter days of testing which await us all (if we haven’t entered into them yet)…is there hope?   Absolutely!  Is the Creator – the One who inspired Stonehenge way back around 2,500 B.C. still with us in-spite of witches and warlocks who claim its Sacred environs?  You better believe it – these measurements confirm that Stonehenge belongs to the Eternal God – Maker of Heaven and Earth and His Divine Deliverance for all humankind – and YES, we desperately need to be delivered before we blow ourselves to bits!

And how exciting that Britain’s first Egyptologist, Sir William Matthew Flinders Petrie, and many other Brits over five centuries fascinated upon the Great Pyramid of Giza – while in their backyard, behold:  The Great Pyramid of Stonehenge was there all along!

Aubrey Circle/Stonehenge…the answer and key to Stonehenge is the 360 degree circle– there’s much, much more coming on the heels of these things initial rumblings – MUCH MORE – may the Creator grant me breath to complete them as was the case with the great Australian astrophysicist, Dr. George Fredrick Dodwell…who finished Stonehenge just before he departed this earthly clod…. 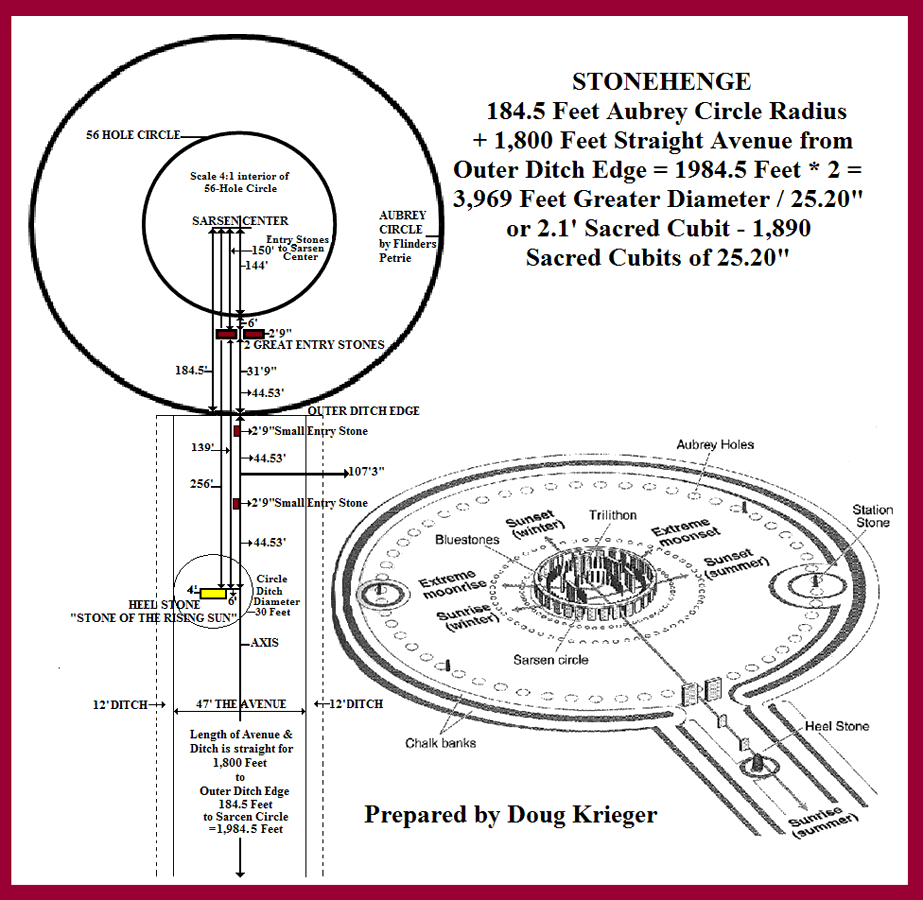 NOTE:  This graphic MUST be magnified to be properly seen (click to enlarge)

Sorry, but I couldn’t cram everything in; notwithstanding, these measurements are exceedingly tight and well-argued and confirmed by the best of the metrologists who have participated therein – also to be featured (eventually) is the superb work of Dr. Anthony Johnson (Oxford University).  His will be designed to amplify the conclusion that the simple geometry of Stonehenge is the New Jerusalem marvel revealed at this World Antiquity Site is of the first order!

News to so many – but wait until we get to the fullness of STONEHENGE – absolutely stunning dimensions in every possible way – nary a rock there does not cry out:  HOSANNA!  Blessed is He that comes in the Name of the Lord!

Dr. Johnson brings out (cir. 2008) the intensity of the geometric ramifications of Stonehenge – and I wholly concur – but everything about Stonehenge is such an incredible demonstration of the New Jerusalem – JOHN MICHELL (my hero) WAS SPOT ON – and far more so than he had any idea! Would he could have lived to see this day!

And what of the 1,800-foot AVENUE leading straight up from the northeast across mundane pasture to Aubrey Circle’s ditch?  – for “straight is the way” that leads to Aubrey Circle – and indeed it is a perfect 600 yards…before the outer chalk bank/ditch/moat is reached and the 184.5 foot journey commences to the heart of the Sarsen Circle…glorious math ’tis this…for 1,800 feet + 184.5 feet = 1,984.5 feet * 2 (because this is a vast, enormous circle of unparalleled worth = 3,969 feet / 2.1 feet (the marvelous ancient Hebrew Sacred Cubit so long sought after by so many, including Sir Isaac Newton, John Taylor and so many others – and NOW we know – it is absolutely without equivocation 25.20 Imperial Inches and this 3,969 feet / 2.1 feet = 1,890 Sacred Cubits – DO YOU SEE IT!  Two sets of “18” as in “18” and 1 + 8 + 9 = “18 but more so, because the number “9” is 100% the last of the numbers (with “1” being the first) and is He not the “First and the Last?”  Absolutely!  So, “9” is the Sun of Righteousness and He’s out for His “18” – the New Jerusalem – DON’T YOU LOVE THIS STUFF?  All I can do is thank God Almighty for the Brits and their God-ordained brains – even their atheists seem to have them (sort of) – but perhaps Richard Dawkins may have lost his mind in that he’s now pushing for all Brits to read the King James Version of the Sacred Canon – oh, well, miracles do happen!

FORGET THE WITCHES – CHECK OUT THE DITCHES!

But we must measure the Avenue’s Width – it is 47 Feet and what of the two parallel ditches of 12 feet wide on either side – don’t forget the DITCHES!! Nothing is wasted at Stonehenge. We may think these but worthless ditches – the gutter and all…but, these be greatly esteemed!!

Wait until you find out that there are “13 Circles” which can be formed around Stonehenge – equaling the 8 planets of the Solar System and the 5 dwarf planets and then, of course, ALWAYS THE ALTAR – the inescapable Altar Stone–”GO MEASURE THE TEMPLE” – “AND THE WORSHIPER AT THE ALTAR” (Rev. 11) that’s it folks, that’s it…

And you want to know why there are 56 Aubrey Holes? And why there are 30 Y Hole Pits and 29 Z Hole Pits? Do the CIRCULAR 360 DEGREE MATH and you will know precisely why!  Hey, and don’t try to add a 30th blame hole when there’s only 29…there’s a reason for everything going down at Stonehenge – she a marvelous and glorious world class antiquity – oh, WONDEROUS STONEHENGE!!

Yes, STONEHENGE is about to undergo a MASSIVE MAKEOVER – so that by the time the next little ditty of a concert takes place around those parts – WE’LL BE CELEBRATING PARADISE – THE NEW JERUSALEM – THAT’S IT (they’ll probably be a little crowd off to the side with this little revelation rejoicing – but that’s just fine – it’s the “remnant” that God’s after and I guess that’s exactly what He’s going to get) – the great giants of archaeology and metrology and now geometry have done the measuring and the science and now the final answer to this most intriguing of mysteries awaits our simple and easy to understand declaration.

Note:  These are nothing but glorified e-mails sent off in haste to the editor of this fine publication – he makes me do it!

The Sacred Cubit is ALL OVER STONEHENGE and THE GREAT PYRAMID OF GIZA —- MAJOR DISCOVERIES – my mind is totally blown – this is absolutely full-proof and will excite the Sacred Geometry Community BIG TIME — I’m totally into it now but the comparisons between the two are startling…let me just give you a preview (but before I do; let me disabuse those who are so absolutely confident that the Egyptian Royal Cubit had anything to do with the building of the Great Pyramid of Giza – it didn’t – sorry, stay tuned for what did!):

Stonehenge really has a massive diameter of 1,800 feet (the Avenue leading up to the Aubrey Circle) + Aubrey Circle itself which Petrie measured at 184.5 (radius only) – so combine the two and you get 1,984.5 IMPERIAL FEET (as a radius…whoops, gave it away…I’m making one WHOOPER of a circle – yes, we’re going to SUPER-SIZE STONEHENGE – code:  SSS) * 2 (to secure her diameter = 3,969 IMPERIAL FEET (I just love this word IMPERIAL – has a neat little British ring to it as if it is superior to all other measurements – better than ROYAL – see you can be “royal” but “spreading the joy around” is “Imperial” – well, at least the Imperial Mile).

So – tell me if this will convince you of the absolute DOMINANCE of the Sacred Cubit and ipso facto the Imperial Mile which incorporates the “essence” of the Sacred Cubit – and pray tell why, oh why have the Brits and the rest of the world given up on the Imperial Foot, Mile, Inch, Gallon, Pound, Fahrenheit,  – you name it – and the whole thing went metric because of a couple of guys who couldn’t measure their way out of a polar ice cap that they got wrong and we’ve been adjusting that consarn thing ever since – so, blame the Americans, who have no idea what a treasure they have in these Imperial measurements – better to have kept the mile out of ignorance than to have thought we were smart and gone for the metric!

Now, that said, the elevation of the Great Pyramid of Giza has “somewhere between 480’ and 481’ in its height – so take your pick – but I’ve got news for you – our little 480.69 Feet is just shy of several others like Petrie and a pot load of others (and no, no one was smokin’ as far as I know); however, I am now convinced that the ratio of 1.57 can be maintained and is maintained via this:

So – you’re still not convinced – well, check this out:

This spectacular discovery will set the Sacred Geometry on fire!!  And, believe, me, that bunch needs to be set on fire!  Imagine – we have found the key to unlocking Stonehenge and Giza by using the Sacred Cubit in this glorious fashion and confirming that both attest to the measurements of the New Jerusalem!  WE KNOW THE END GAME – the whole kitten kaboodle (American for all-inclusive) is prophetic to the extreme!

Wait until you see our series on Stonehenge – it’s absolutely mind-boggling and the numbers don’t lie!  Meanwhile you can visit me at a most troubling web site known as the Tribulation Network (as if there wasn’t enough of Armageddon theology to begin with…and now all this 2012 stuff – I mean, after all, calling it TWENTY-ONE TWELVE is a bit over the top as in 21 December 12 … but, then again, 2112 sounds and looks precisely like the perimeter in feet (i.e., 21,120 Linear Feet) of the Sacred District of Teotihuacán, Mexico City area, Mexico…but to find out how Teotihuacán gets along with Stonehenge…well, the fine editor-in-chief of World Mysteries now has all my articles (7 of them on the topic) and he’ll have to decide, pick and choose, of which ones you are deemed worthy … so taking Stonehenge away from witches and warlocks is tough but try redeeming hundreds of thousands of human sacrifices at Teotihuacán and then turning around and calling it a “Sacred District” – talk about chutzpah! 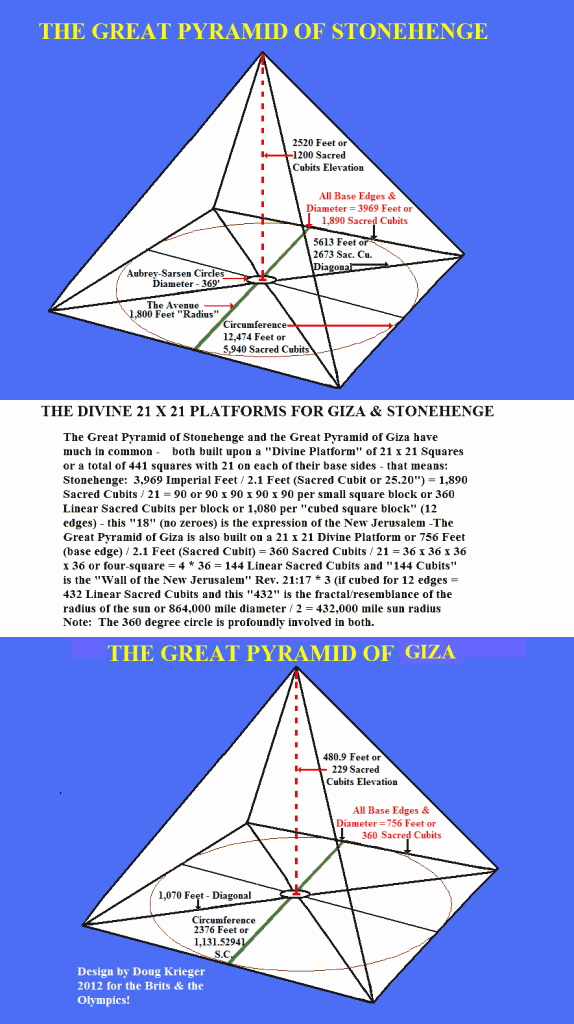 Coming Soon: The Great Pyramid of Stonehenge and the CRYING OUT OF THE STONES

Britain’s Atlantis’ – a hidden underwater world swallowed by the North Sea – has been discovered by divers working with science teams from the University of St Andrews.

Doggerland, a huge area of dry land that stretched from Scotland to Denmark was slowly submerged by water between 18,000 BC and 5,500 BC.

Divers from oil companies have found remains of a ‘drowned world’ with a population of tens of thousands – which might once have been the ‘real heartland’ of Europe.

A team of climatologists, archaeologists and geophysicists has now mapped the area using new data from oil companies – and revealed the full extent of a ‘lost land’ once roamed by mammoths.

Read More (Source): ‘Britain’s Atlantis’ found at bottom of North sea – a huge undersea world swallowed by the sea in 6500BC