Could the famous images and lines, more than 2000 years old, found on the wide/open Plain of Nazca have been created from the air? Countless researchers have considered this (obvious) idea since there is no highpoint to direct production of the ancient depictions in this barren area.

From the ground, Nazca lines make no sense. The gigantic pictures etched into dry dirt are only clearly viewed from far above. We discovered Incan fortresses atop Andes Mountains only because of the flights of modern airplanes and so too were the Nazca images first seen or deciphered. We had to fly over these old mysteries to find and fully appreciate them.

The LINES portray a spider, a monkey, a lizard, a dog, a whale, fish, other oddities like aliens and various types of birds. Not only do the lines form imagery, another major mystery is:

PERFECTLY STRAIGHT LINES that continue for miles on the strange plain (marked) from long ago. Investigators have speculated that the extended, straight lines were “landing strips for Ancient Astronauts.”

How were they done? Who did them? Why, what were they? My conclusions or answers are:

Consider the desert Plain of Nazca is almost like the surface of the Moon. There is no rain; there is hardly erosion or much entropy at all. A MARK, an unnatural gouge or indentation, will survive the sparse weathering in this part of South America (Peru). Let’s look at the big images: 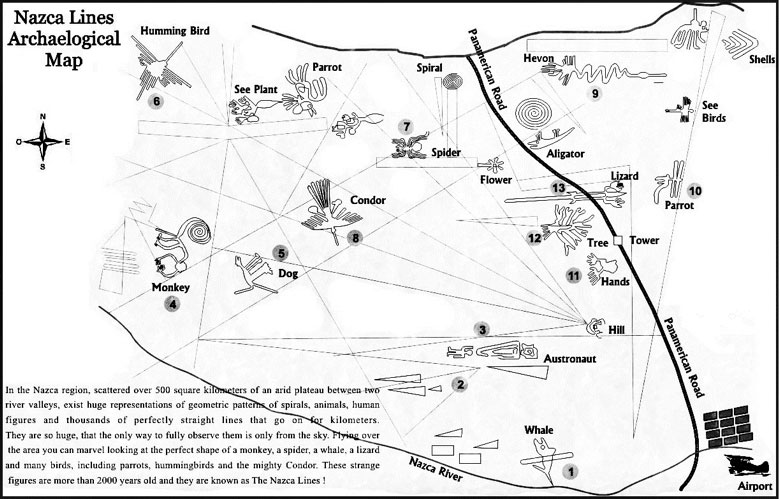 Lasers are a logical answer to the straightness of lines that go on and on for miles. They were probably done very quickly and with definite purpose. Such a conclusion comes from the exactness of the lines, the order, their precise placements, constant width, etc.

The lines of images don’t start and stop:

LINES OF THE IMAGES ARE A CONTINUOUS MOTION as if ‘pen never left the paper.’ There are no crosshatch marks. The artists did not go back and fill in spots with separate lines. Each image is one masterfully crafted design [probably produced very quickly] burned into the ground with a graceful, swirled, extreme sophistication of a diamond-cutter or engraver IN MOTION FROM THE AIR~ Were the pictures made (laser-etched) from COMPUTERS on board the crafts, with set image-programs, that had symbolic meanings: directions/features/data? 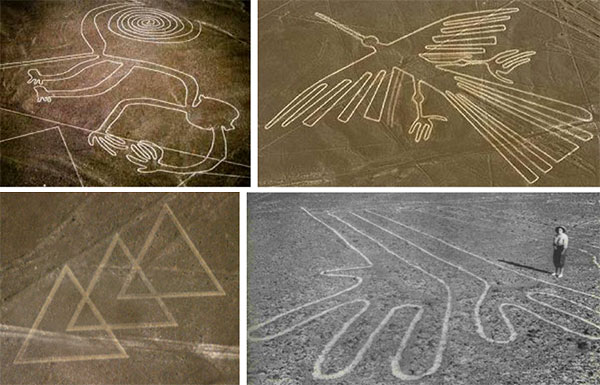 See the black and white photo where there is a sense of size and perspective. THE LINES ARE ONLY 4 INCHES IN WIDTH. Another consistency that a machine did this is in the WIDTH of the lines. The width never alters. The width is always 4 inches. This is important. And the fact of ‘laser-straight’ LONG lines which only make sense from high in the air.

This is Peru and near the stone wonders on top of the Andes Mountains. This is within an area of incredible Incan ancient ruins and history and mysteries…not from Alien Astronauts, but from our long-lost Pre-History. In the true version of prehistoric times, WE flew and utilized the dangerous ‘Forbidden Fruits’ of great technologies.

Nazca contains multiple enigmas such at a mountain with its top sheered completely off. The high flatland is not a natural mesa. It was engineered to be flat. Numerous researchers have asked: What happened to the huge mountaintop? [Have we not (although primitively) bulldozed and carted off vast volumes of earth for highways and homes? Same thing~].

WHY? What was the purpose of Nazca images and straight lines? The answer must takeoff, circle and land on the subject of FLIGHT. Everything points to ages of West Indian flyers also at a time when East Indian Vimana-flyers crowded skies in India. Pilots probably used an Aerial Language of Symbols similar to our images on road signs and city signs. Many empires mastered the air long before the Wright Brothers, the physical evidence tells us. (Egypt, India, China).

It is interesting that Nazca ‘banners’ and ‘billboards’ were possibly at a time, NOT as advanced as an earlier time of light-speed saucers and disk-type spaceships of Pre-Incas…but on the order of later (less advanced) Mayas/Aztecs with hieroglyphs and hovercrafts and airplanes. Devolution.

One more clue in the vicinity of Nazca, only toward the ocean, is massively carved at the shore (not 4” in width). Another misunderstood SIGNPOST points the way to Nazca for any incoming sky-vehicle, Vimana, Indian flying craft or airplane that came over the ocean. Everyone calls it the ‘TRIDENT’ or ‘Candelabra at the Bay of Pisco.’

Everyone is wrong. You would be amazed at what you’d learn if ONLY a different angle was viewed. It’s not a Trident or Candelabra. Turn the image upside-down. The image is a rocket! Viewers can plainly see the nosecone, fuselage, fins and rocket-thrusters blasting away! The idea of a rocket with old-fashioned THRUSTERS for propulsion aligns with the devolved state of Mayan Indians and not the much earlier Super Incans with a far superior technology~

Below, close to Nazca in Peruvian Highlands: enormous SIGNS seen from many miles away.

This is a tour of the Nazca lines that Gary Schoenung put together to show people how much is actually there. After watching this the “official” explanation seems kind of silly.
I don’t think the natives did it. And the real explanation has no more to do with aliens than any of the other so called mysteries on our planet.

The Nazca Ruins from Gary Schoenung on Vimeo.

PS2 New Theory about how the Nazca glyphs were made 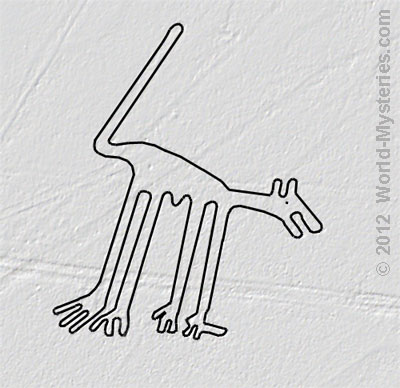