You can tell him (a lunatic) by the liberties he takes with common sense, by his flashes of inspiration, and by the fact that sooner or later he brings up the Templars.

Several journalists have been in touch with me this week to comment on the ‘discovery‘ of the ‘Templar’ cave in Shropshire, England. Yesterday, the BBC claimed “an apparently ordinary rabbit’s hole in a farmer’s field leads to an underground sanctuary once said to be used by the Knights Templar – a medieval religious order that fought in the Crusades.” 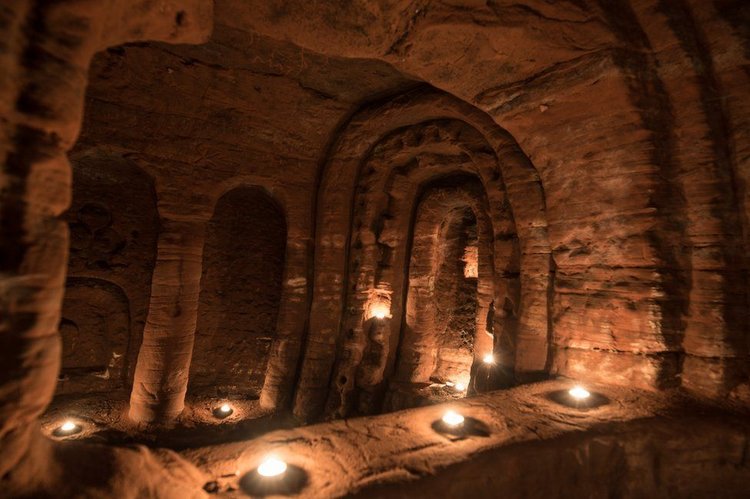 THE ARTICLE WENT VIRAL, BUT IN THE WORDS OF MR TRUMP “IT’S FAKE NEWS.”

This is my Global News interview laying out the facts. 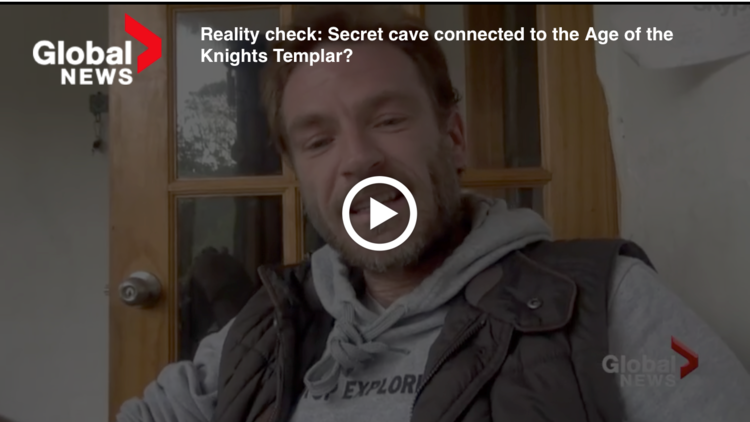 YES THERE ARE ARCHES AND NICHES, BUT THESE ARE ALSO FOUND IN SUBWAY STATIONS, HOTELS AND VICTORIAN PUBLIC TOILETS.

The BBC’s disclaimer is hidden in plain site within their headline; “it was once said to be used by the Knights Templar”. It’s 2017 and being asked to swallow this twaddle is tiring. Let me ask the question on the tongue of hundreds of thousands of historians and rational-minded people across the world: “once said by whom, exactly?”

Selling the pop-cultural stereotype that the Knights Templar were a band of mystical heretics with dark religious secrets is so 90’s. Latterly, the Knights Templar were like any modern banking institution; managed by gold hungry selfish narcissists, who brought about their own demise in 1307 AD, through greed. Prior to this, 95% of Templars were farmers, powerful agriculturalists making fortunes on sheep farming. But books entitled  “Sacred Sheep of the Knights Farmers” just wouldn’t go mainstream in the same way the Da Vinci Code did. 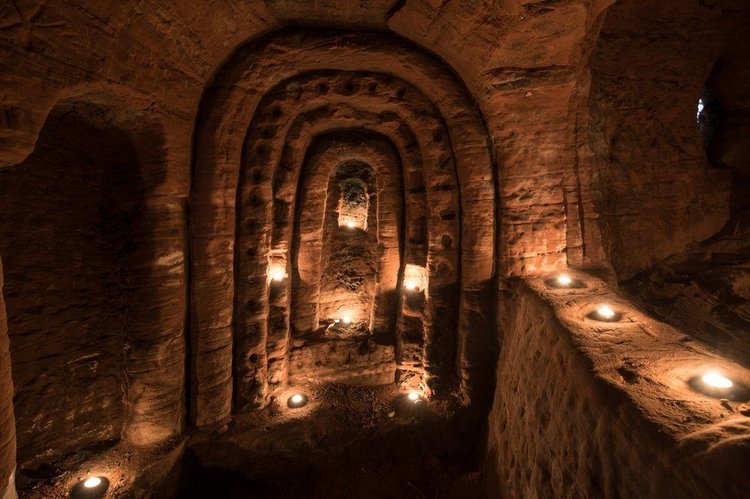 SO WHAT IS THE CAYNTON CAVE?

It’s all very well for me to sit on the side-lines throwing abuse at the worlds media for regurgitating a heap of complete rubbish. And I always say “if you trash one theory, you must have a sharper one to replace it.”

Michael Scott, from Birmingham photographed the cave using a bag of Ikea tea lights to make it look like a mystical underground church from the set of a Harry Potter movie. When you blow the tea lights out however, it’s not really that special and there are many far superior such styalised caves in Shropshire.

Collectively known as Follies, dictionary.com tells us they are; “whimsical or extravagant structures built to serve as a conversation piece, lend interest to a view, commemorate a person or event, etc.: found especially in England in the 18th century.” 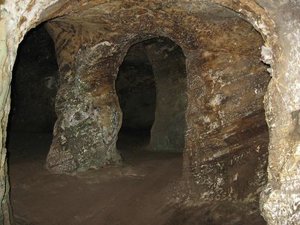 The nearby Hawkstone Follies was an architectural project created by Sir Richard Hill, 2nd Baronet which stimulated the local economy. The central feature is a sprawling mystical cave, similar in design to the Caynton cave with pillars and arches, but five times larger. Opened to the public in 1748, the Hawkstone Follies is made up of a man-made network of caves, cliffs and grottos and their otherworldly appeal was used to represent parts of Narnia in the BBC’s TV adaptation of C. S. Lewis’s books for the battlegrounds in The Lion, the Witch and the Wardrobe in 1988. 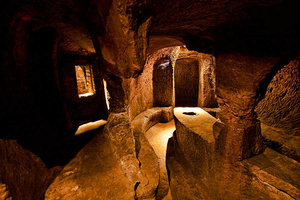 In Scotland, Gilmerton cove is a series of underground chambers and passageways hewn from the sandstone bedrock that lie hidden beneath the streets of Gilmerton, in an old mining village to the south of Edinburgh. This carved subterranean cave has seven rooms with rock hewn tables and chairs, a well, a fireplace and a blacksmiths forge. Archaeological investigators don’t know the exact origins of this cave but, of course, the most common theory is that it was a secret Templar sacred site.

LETS RESOLVE THIS SITUATION WITH A PROBLEM-SOLVING PRINCIPLE, OCCAM’S RAZOR;

“Among competing hypotheses, the one with the fewest assumptions should be selected.”

Victorian parish magazines of Brereton record that in “July 1883 the church choir from here visited the caves on an outing to the Caynton Hall home of General The Hon. Arthur Charles Legge.” The article claimed that the cave had been “hewn out of the solid rock by General Legge himself,” which probably means he paid workers to do it for him. 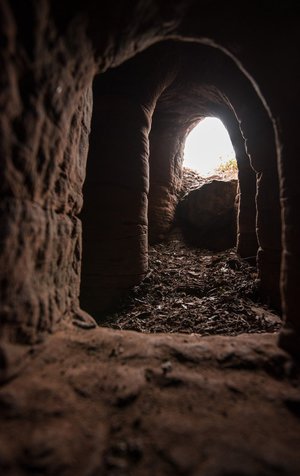 Victorian General Legge, 1st Life Guards (1800-1890), was a brother of the 4th Earl of Dartmouth, who moved the family seat from Sandwell Hall to Patshull Hall (not far from Caynton) in 1848. If this claim is a factual, and there is no good reason to doubt it, the caves as we see them today are mid-Victorian.

Local historic records state: “Caynton was altered in the 1850s by Col. Legge and cut into a disused quarry 250 m. west of the house is a small neo-Romanesque grotto with irregular ambulatories opening into inner sanctuaries. It is locally reputed to have been made by Gen. Legge but could be older.”

Here we have two historical records which attribute the creation of the Follie to General Legge, yet not a single reporter in the world has mentioned this somewhat important, and not so deeply buried, fact.

Many features correspond with Celtic Druidism and neo-paganism. Caves like these were often referred to as ‘druids grottos‘ and such the nearby Hawkstone cave was carved specifically to convey druidic cosmological beliefs and to serve as a back drop for neo-Druidic rituals.

18th and 19th century European druidic orders included monotheists, polytheists and pantheists and they directed reverence toward nature, the inner dimensions of the self and the turning of the seasons. Waves of people from many different ethnic backgrounds, with varying theological opinions, all agreed that nature deserved reverence and in the hidden potential of the self. 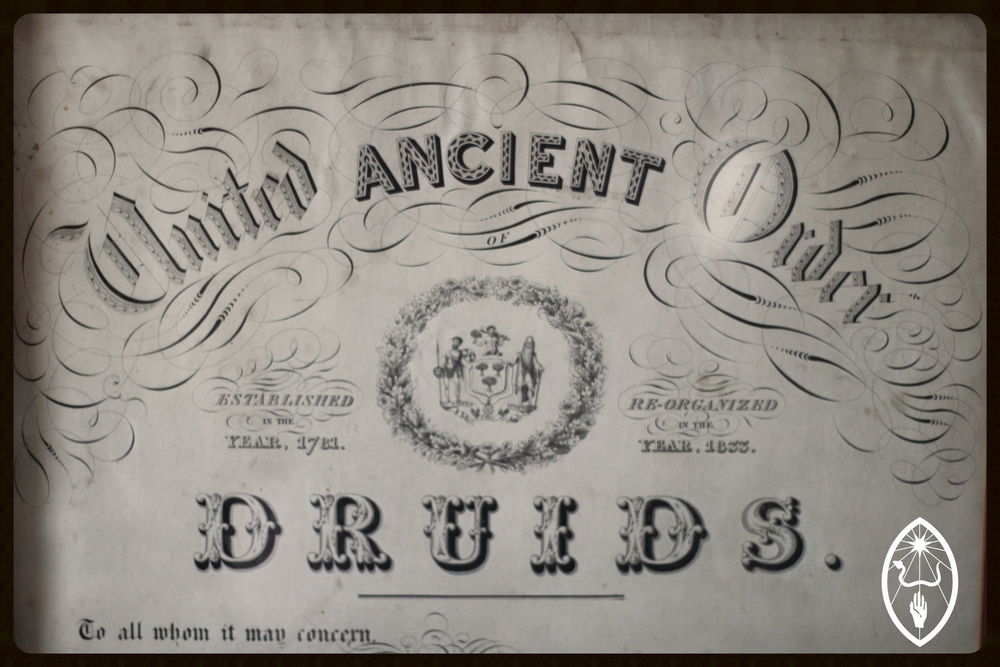 At a time similar as today, when strife between followers of dogmatic religions was tearing nations apart, druids followed a spiritual, peaceful path, building bridges instead of raising walls. As the 19th century unfolded Druid teachings spread to Brittany, France, America, and Australasia, turning the Revival into an international phenomenon, and with it came extremists.

A DRUID? OCHT, EVERYONE HAD ONE

In the 18th century some wealthy landowners took the druidic Revival to a whole new level and employed Garden Hermits – bearded old men encouraged to live outside in the follies and grottoes dressed like druids. They were paid to remain on-site so that they could be shown to guests for entertainment! In my opinion this entire concept sits right beside Pablo Escobar being given a ‘little person’ as a birthday present, who juggled for guests.

Allison Meier, in a 2014 article entitled ‘Before the Garden Gnome, the Ornamental Hermit: A Real Person Paid to Dress like a Druid‘ tells us: “Some land owners asked that their hermits not wear shoes and to recite personalized poetry at parties. It might seem like a whimsical garden feature, but in fact it was all about that most celebrated of Georgian England emotions: melancholy. Introspection and a somberness of spirit were prized among the elite, and the roles they asked their hermits to play embodied this.” 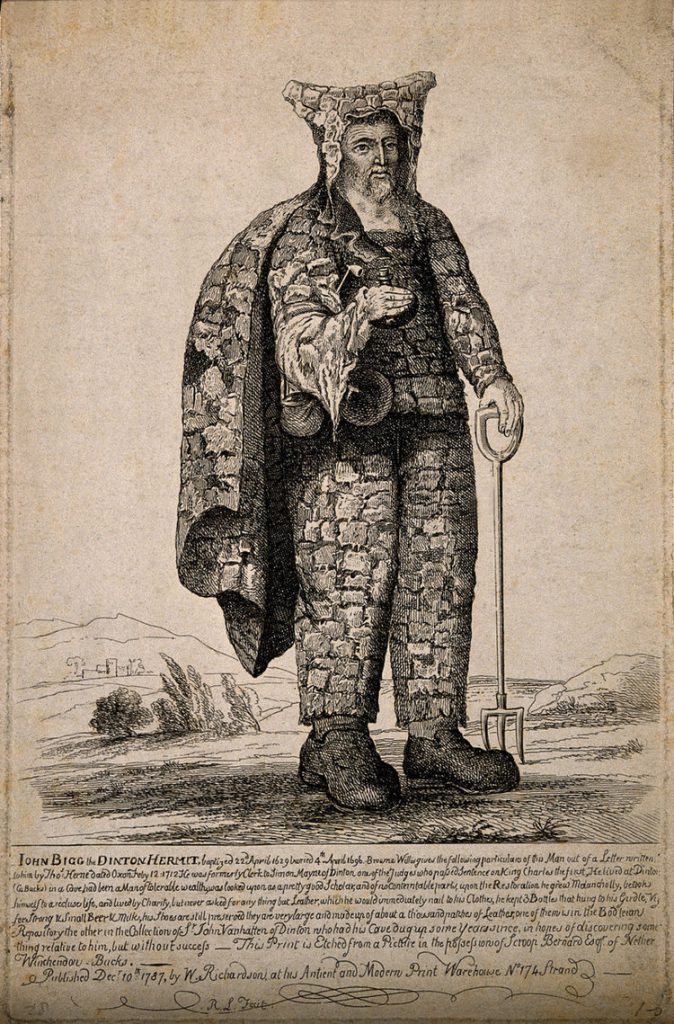 John Bigg, the Dinton Hermit. Not a garden hermit, but of same era (via Wellcome Library)

A 1784 guide to the Hawkstone estate in Shropshire belonging to Sir Richard Hill describes its resident hermit: “You pull a bell, and gain admittance. The hermit is generally in a sitting posture, with a table before him, on which is a skull, the emblem of mortality, an hour-glass, a book and a pair of spectacles. The venerable bare-footed Father, whose name is Francis (if awake) always rises up at the approach of strangers. He seems about 90 years of age, yet has all his sense to admiration. He is tolerably conversant, and far from being unpolite.”

Returning to Caynton cave. An enduring local story tells that one of the estate owners kept a slave in the cave, after slavery was abolished. But I wonder how much of that story corresponds with the owner having kept a resident Druid – a Garden Hermit.

This whole fiasco is essentially a sad example of the effects of the collapse of the newspaper print advertising revenue. The onset of the internet caused massive cuts in journalistic budgets and every reporter I know is crushed, and doing the work of three researchers and writers. Thus, the worlds media houses have created a cut and paste environment where fundamental factual errors spread like a pandemic within hours.

“it was once said to be used by the Knights Templar” – yeah, right.