When the late German archaeologist Klaus Schmidt revealed details about the incredible site he was excavating at Gobekli Tepe, it was apparent that present held beliefs about the early history of civilised man needed rethinking . The reason why this Turkish site is so important is that the oldest part dates back 12,000 years to the era that’s only associated with hunter gatherers. Gobekli consists of several circular enclosures ranging from 30 to 100 ft in diameter. Schmidt and his team have only excavated a few of them and there are at least twenty. Some of the circles are on the summit of a grassy hill which , due to its domed shape, is known as Potbelly Hill. Around the rings there are T shaped standing pillars and there are two larger pillars in the centre. There are over 200 pillars at Gobekli and many of them are up to 20ft high and are estimated to weigh 20 tons . 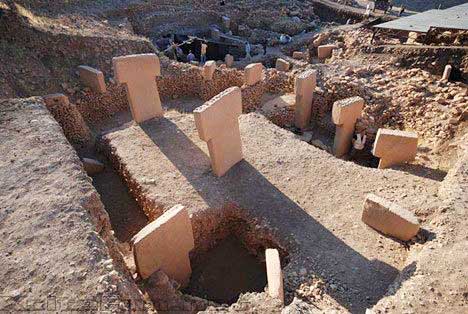 For thousands of years, high places were associated with the gods and that’s why many early temples were built there. Gobekli Tepe’s hilltop site was not defensive or residential and the indications are that it was a sacred area and that the two pillars outside the entrance of some of the circles represented a gateway between secular and religious ground. There are many depictions of birds and animals at Gobekli . Some are thought to represent constellations but others seem to be religious symbols . 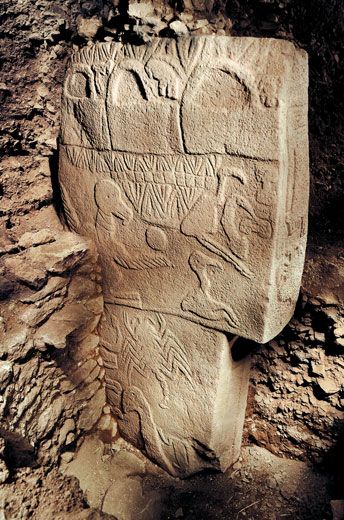 My interest in Gobekli Tepe stems from 35 years of research into the Early World during which time I found evidence to suggest that there was an extra-terrestrial visit to this planet around 5,000 years ago which changed the course of human history. It resulted in numerous versions of a sky-god religion which were branded as pagan ,and were suppressed, following the arrival of present day religion. Some folk, however, still continued to follow the sky-god traditions of their distant ancestors. According to early legend, the aliens appeared to man in the form of white-robed, bearded, men and many folk associated them with the Pleiades. The significance that the Ancients placed on these stars is truly amazing . Some people regarded them as the birthplace of the human race and the mother of all creation. They regulated several early calendars and festivals of renewal were celebrated at certain times in the year when they appeared. In many parts of the world various animals and birds were used as religious symbols and a local bird was sometimes said to be the companion of a god. In South America, for example, the condor was the companion of the Incan civilising, white-robed, bearded god Viracocha who wore a long white robe fastened by a belt. The animal which was universally associated with the sky-people was a serpent and on some Mayan, and Aztec, structures, such as the Pyramid of Kukulcan in Chichen Itza, a snake was depicted descending from the summit to indicate that it came from above. 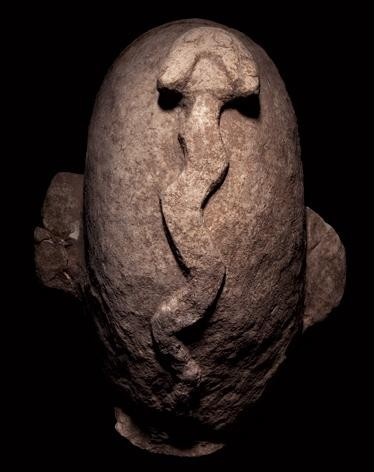 Of the many animals depicted at Gobekli Tepe, the most common one is a snake and representations of it have also been found at other Turkish sites. The now flooded Nevali Cori is an early Turkish site in Hilvan Province thats been dated to 8,400-8,000 b.c.e. Among the lime stone statues, and artefacts, discovered there was a life sized stone head which has a snake coiling up it’s neck and resting on its head. Did this represent a ‘serpent-god’ or a priest? There are also T-Shaped pillars at Karahan Tepe on a ridge in the Tek Tek mountains 23 miles south-east of Gobekli. This site , which has been dated to 9,500 -9,000 b.c.e, is known as Gobekli Tepe’s sister site. Researcher Andrew Collins says that the prominence of Karahan’s serpent art suggests that this creature was of special significance among the local population. He also notes that the lines of zigzagging avenues of stones, on the hill, might represent this creature’s descent to the valley below. Were they symbolically descending to Earth, from the heavens , as others were thousands of years later such as in Chichen Itza ?

Gobekli’s circles have been identified with letters and in Circle D , one of the oldest, and largest at the site, snakes and foxes are the most common motifs. Its two central figures appear to represent revered beings. They might have been gods, maybe one male and the other female, who had T-shapes instead of heads because it was forbidden to see their faces. The T-shaped stones around the circle may have been their companions. One of the two central pillars deserves our attention. It has carved arms on its side and its hands rest across its belly on the narrow front. Below the hands there’s a belt and under this there’s either the rear and tail of an animal, or a three-fingered hand , which continues down to within a short distance of the plinth as if drawing attention to something. Along the side of the plinth, there are ‘seven birds’ standing in a line from west to east. And as the east, the direction of the rising sun, was linked with birth and rebirth, and a cup mark on this stone was aligned to the summer and winter solstices, when many early religious festivals were celebrated, does this imply that the seven birds, and the entity represented by the pillar, were ‘reborn’ on those days

Seven birds appeared in many legends, over the years, including in some stories which involve violence. On ‘The Vulture Shrine’ in the 9,000 year old Turkish settlement of Catal Hayuk seven vultures are shown swooping down on six headless figure . There were seven birds in an Egyptian legend and, in the biblical deluge story, birds by seven enter Noah’s Ark. In early England, seven birds were associated with destruction. They were called ‘The Seven Whistlers’ and some people were frightened to go out when they were thought to be about. The Thunderbird is a popular character in many North American Native stories and Seven Thunderbird Sisters are the subject of an Ojibway legend.

There’s a hole drilled through the east side of Circle D’s Stone 43 and through it the sun shines on the equinoxes. This astronomically aligned stone is known as the Vulture Stone as on it there’s a depiction of a large vulture which has a disc over the tip if its extended right wing. Ahead of the bird there’s a snake and three smaller birds. A disc linked with wings, or a bird, suggests a flying object and that’s what this symbol might represent. Assyria’s chief god Ashur was depicted in a winged disc. Its New Year ceremony was regulated by the fall equinox and Ashur was involved in the ceremonies. Could it be that Gobekli’s symbolism depicts the arrival, on Earth, on the equinoxes, ‘in a disc’, of the above mentioned T-shaped stone figure ?

Some of Assyria’s gods were shown holding bags. Were they carrying the food, and drink, of the gods which were mentioned in several early religions? When I was researching Central America, I was amazed to find that an identical bag was shown held by an Olmec god who was shown seated inside the mouth of a serpent. This Olmec deity appears to be a counterpart of the Aztec civilising god Quetzalcoatl (Feathered Serpent) who was also shown looking out from the mouth of a snake and whose circular-base serpent temple , in Tenochtitlan, was aligned to the equinox sunrise. Quetzalcoatl was a counterpart of the Mayan god Kukulcan whose return, (from the Pleiades}, was celebrated at Chichen Itza on the equinoxes. Deneb, the star thought to be aligned through the central pillars in Circle D, is the brightest star in the constellation of Cygnus,(The Northern Cross.) Did this ‘celestial bird’ herald the return of the Gobekli pillar god on the equinoxes and solstices ?

Bearing in mind the amazing influence that the Pleiades had on traditions, and religions, throughout the Early World, I was wondering if they were also of special significance in the Gobekli Tepe culture. Then, by chance, I discovered that researcher Wayne Hershel, in his website, ‘The Hidden Records’, had reported that its circles correspond with the outline of these stars. If this is not just a strange coincidence then it seems reasonable to suggest that this 12,000 year old ‘serpent site’ was dedicated to a civiliser from the Pleiades. And could it be that Potbelly Hill was an early version of the mythical World Mountain which rose from Earth into the heavens and that on its summit there was a representation of the Pleiades?

Many early legends suggest that there was an Earth visit from the Pleiades around 5,000 years ago at which time there was climate change, and flooding, in many parts of the world. Several civilisations sprang up ‘fully developed and many tribes were on the move into new lands .This migration included the Sumerians who arrived in Southern Iraq ‘from an unknown land’ and who settled among the less advanced population. According to the Sumerian scribes, their people were survivors of the flood caused by the chief god of the Annunaki whose leaders were associated with ‘seven birds’. The Sumerians claimed that Enlil helped to civilise Earth’s people ,and taught them agriculture, but he destroyed the previous age with a flood because its people had become evil. Many early people associated the Flood with the Pleiades, agriculture, and the civilisers of man, and as the earliest trace of agriculture is thought to date back 12,000 to the time of the first Gobekli circle, could it be that the Annunaki were visitors from the Pleiades and that they were the ones who were worshipped at Gobekli Tepe and that there’s are early civilisations, about which nothing is known, which date back prior to 3,000 b.c.e ? And, furthermore, as Gobekli Tepe was astronomically aligned, and was built using technology that’s not associated with hunter gatherers, it must surely have been planned in advance by astronomer priests, and constructional engineers whose origin is a complete mystery.

We don’t know what rituals were enacted at Gobekli but, based on its astronomical alignments, we can surmise that they were celebrated on the solstice and equinoxes and that they revolved around the return ,to Earth, of the entities represented in the form of T-shaped stone pillars. Followers of this early religion appear to have come from distant parts to join in the festivities which might have been linked with the rising, or setting, of the Pleiades. So, could it be that beings from these stars have visited our world on more than one occasion and that they played an important role in mans’ earlier development? For those readers who are interested, you will find an explanation of the seven birds in my Pleiades Legacy books in which I have also shown that the snake was universally associated with gods for thousands of years.