Chartres Cathedral is one of the of the finest examples of Gothic architecture in France and it’s also one of the most intriguing buildings that I’ve seen. 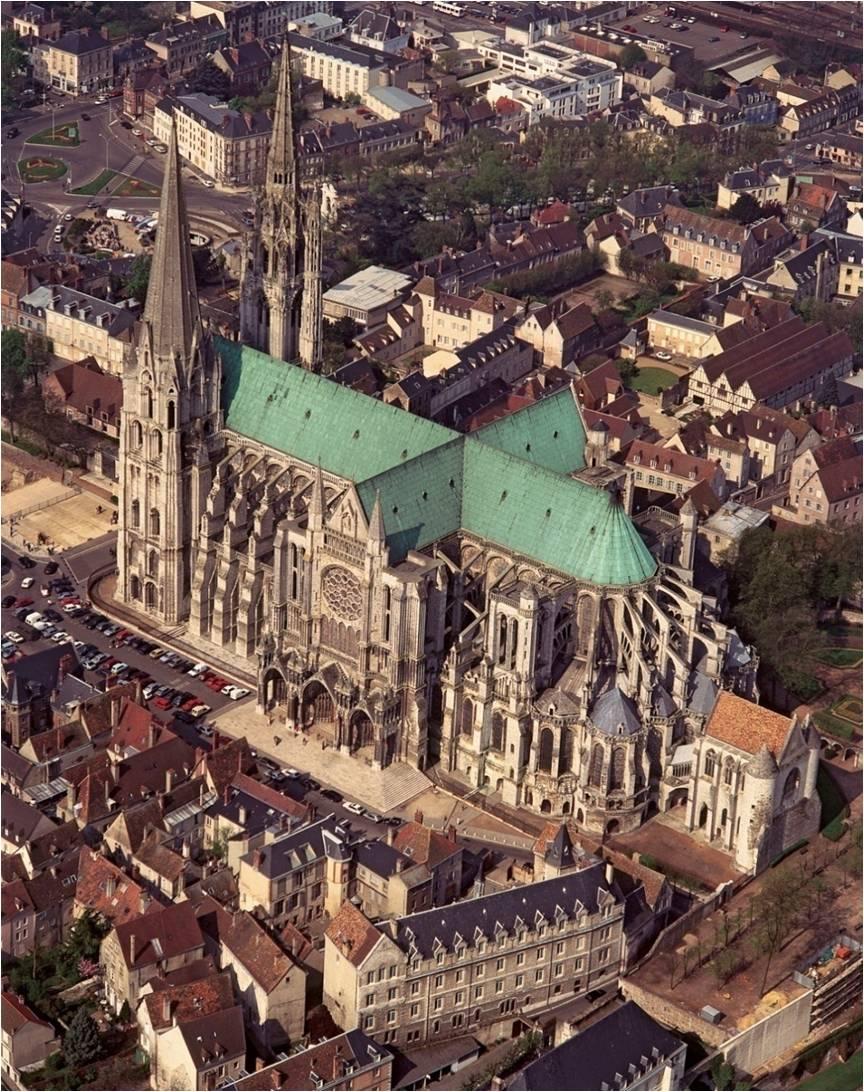 This magnificent structure rises on a granite promontory over an earlier church which was destroyed in 1194.
From around 3,000 years ago, it was a Druid site, the sacred mound of the Carnuti, and for a thousand years, it was visited by numerous pilgrims.
One of the cathedral’s traditions, the cult of the Black Madonna, was adopted from the Druids and a statue of her was kept at Chartres until the French revolution. 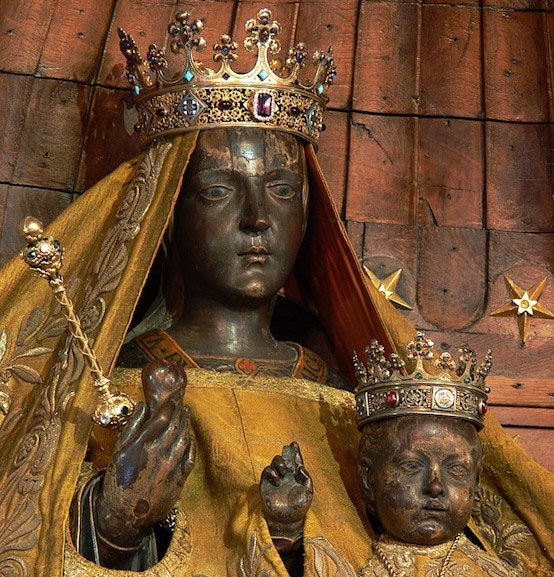 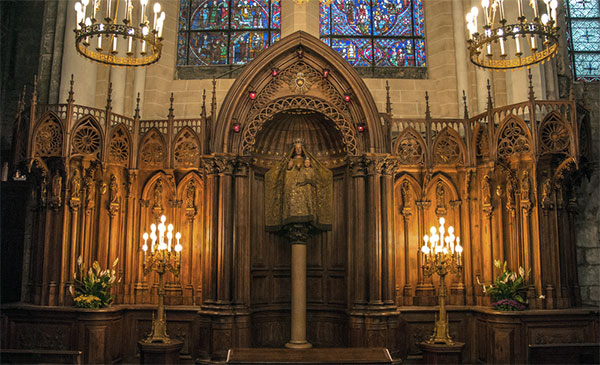 According to legend, the origin of Christian Chartres dates back to the time when Joseph of Aramathea arrived with the Holy Grail before taking it to Glastonbury. Legend has it that he was so impressed with the worship of the Black Madonna, that he sent a message to Mary asking for her permission to dedicate the place to her. 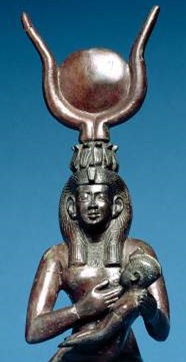 Historians recognize that the statue of the Egyptian Goddess Isis with her child Horus in her arms was the first Madonna and Child.

Some of Chartres traditions originated in Ancient Greece and the Middle East. The major problem for the Roman Catholic Church was that they were controversial and not in accordance with contemporary Christianity. In the 9th century, for example, John Scotus Erigena taught that man consisted of body, soul and spirit and that his spirit was in touch with the spiritual world. The ego, he explained, is eternal and it passes through many incarnations to develop itself. However, as the belief in reincarnation contradicted conventional Christian teaching of Heaven for the just and Hell for the wicked, in 869 the Roman Catholic Church held an ecumenical council at Constantinople and banned it as ‘heresy ’ .

Fulbertus, one of Chartres’ great teachers, arrived at the cathedral about a thousand years ago and, from then onwards, the beliefs of Greek philosophers were adopted and the Greek tradition of the Seven Liberal Arts came to Chartres . Some of the teachings at the cathedral, at the time, were near heretical. A programme of learning more in line with Mithraism than Christianity was introduced. Figures representing the Seven Liberal Arts are depicted on the right doorway of the Royal Porch surrounding Mary and the baby Jesus. 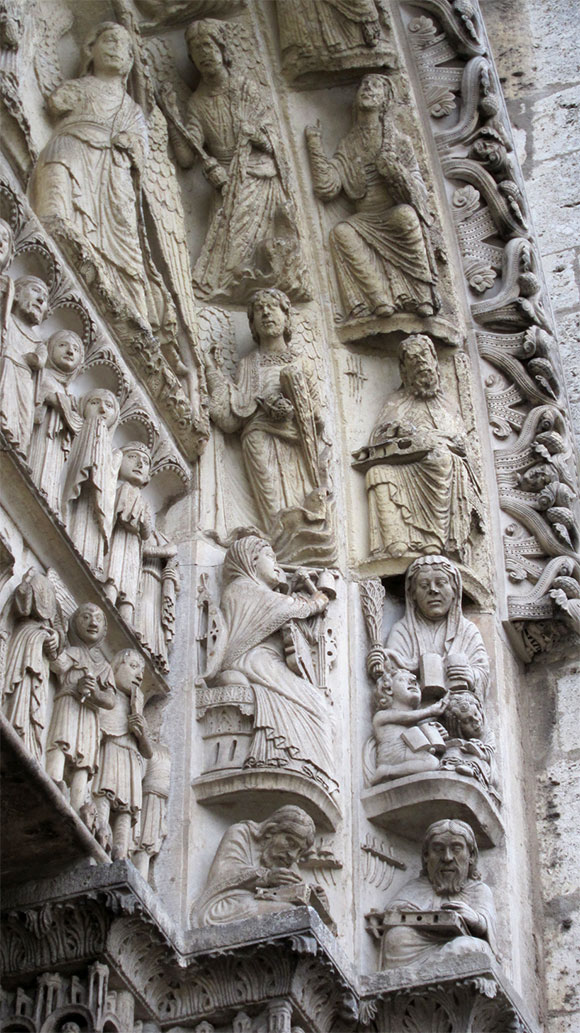 The spiral, in various forms, dates back thousands of years to the time when it was carved on rocks. It’s also found in 5,000 year old Newgrange in Ireland and in temples in Malta. Spirals were was tattooed on the bodies and faces of tribal people and one was depicted in the form of the tail of a giant monkey drawing in Nazca desert in Peru. The spiral was adopted by the Church and in the form of the labyrinth it was depicted on the floors of several cathedrals and churches. Chartres’ huge circular floor spiral was laid out in blue and white marble and it was divided into four large segments. (The central feature is similar to the seven circle representation of the Pleiades}. This symbolic design is called ‘Chemin de Jerusalem’, (Road to Jerusalem) and a pilgrim, at Chartres, making his way around the coils of this floor spiral would be symbolically travelling to that city. 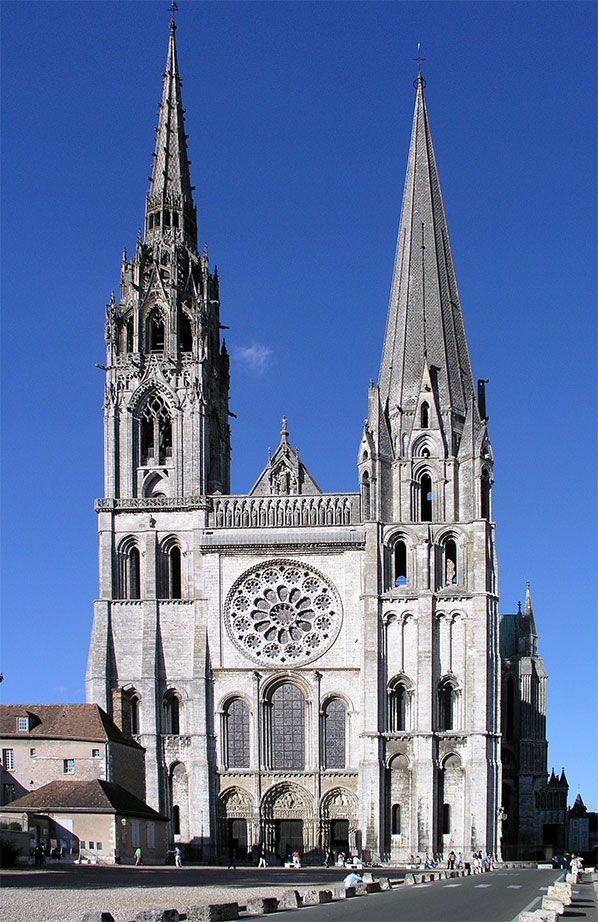 Chartres is famous for its stained glass windows and especially for its great rose window which tells the story of the Last Judgement. 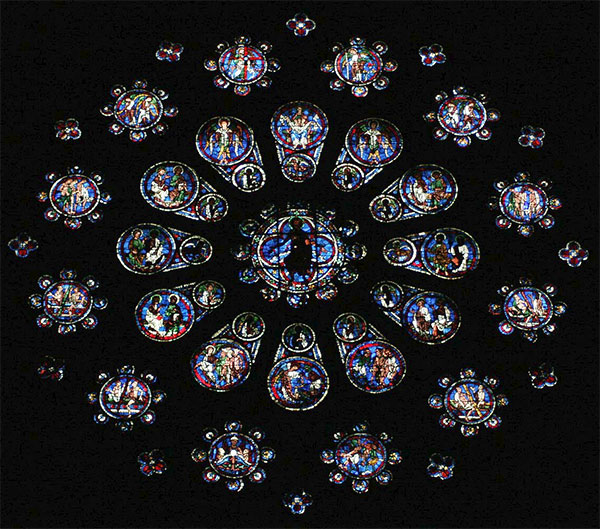 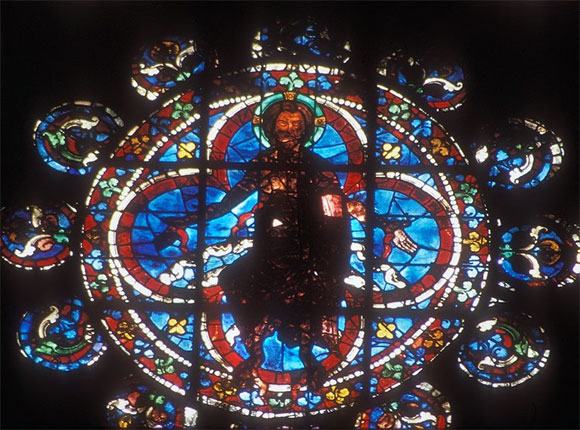 The size, and shape, of this window exactly matches the dimensions of the maze below and if the wall was laid across the floor, the window would cover it exactly. In the central circle of the window, Jesus is shown sitting in judgement and Michael is weighing souls. 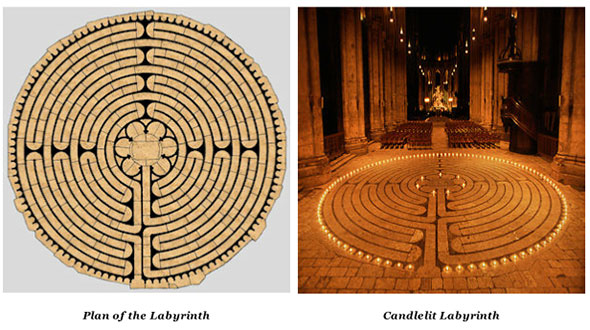 The pavement labyrinth in Chartres Cathedral, France, was constructed during the second decade of the 13th century. The labyrinth is 12.9 metres (42.3 ft.) in diameter and fills the width of the nave. Image Source >> 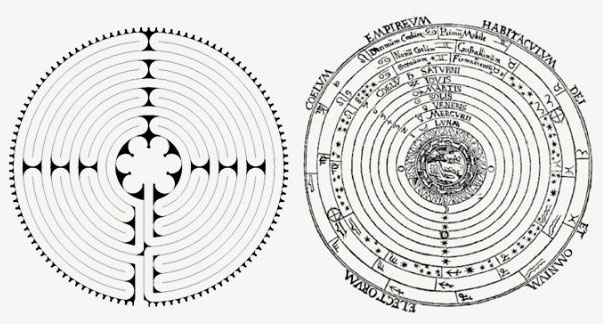 The blessed are taken to Heaven and the damned are tormented and condemned to Hell. The figure of Jesus, in the centre of the rose window corresponds with Jerusalem, the ‘City of God’ in the centre of the spiral below. We might note, here, that rose is a symbol of rebirth and it corresponds with the creation linked Egyptian lotus. And that when Egyptians died, their hearts, the seat of their immortal souls, were weighed against a feather. If the heart was heavier, they believed that they would be devoured by a monster. After a perilous journey over land and water, those who passed the test were allowed into the presence of the god Osiris

One of the three lancets, under the great rose window, is called the Jesse Window. Jesse was the father of King David and from him, in Christian tradition, Jesus was descended. Jesse is shown fast asleep on this lancet with a tree sprouting from his body. After a succession of kings and the Virgin, he is shown on the tree trunk and, around him is the Seven Dove symbol. This symbol was adopted by the Church from Ancient Greece where it represented the Pleiades. 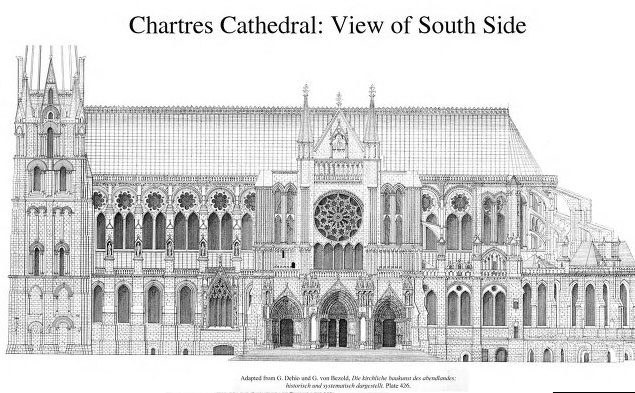 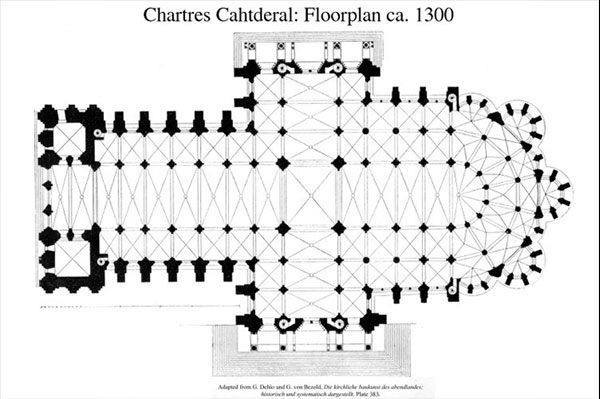 Many Early World sites, such as Stonehenge, were aligned to the solstices and so was Chartres Cathedral. Rene Querido says that a beam from the summer solstice lights up the cathedral’s line of symmetry and falls on the altar. On the winter solstice, a light beam enters Chartres, near its South Porch, and alights on a column leaving the building on a stone wagon. The features depicted on this wagon are the Ark of the Covenant, the Ten Commandments, and a ‘staff’ . Since cathedrals, and churches, are deemed to be the House of God , the winter solstice beam of light is associated with the Lord giving the law at the start of the lighter half of the year . I won’t discuss it here but, I have explained, in my Pleiades Legacy books, that there appears to be a deeper reason why gods throughout the Early World were depicted carrying staffs.

What we have seen, in this brief study of Chartres cathedral, is that its early history is very different to what’s generally believed and that the early pupils were taught controversial things about the spiritual nature of man. We also saw that there were borrowings from the religions, and traditions, of earlier cultures. The Pleiades/dove symbol was adopted from Greece and it was given a Christian interpretation.
The Black Madonna came from the Druids, the weighing of the souls in judgement, on the Rose window, possibly from Egypt, and the spiral from pre-Christian culture. But there is also another intriguing aspect of this story. Throughout the Early World there were versions of a 5,000 year old Pleiades linked ‘sky-god’ religion and certain elements of it, originating in the Ancient Middle East, were an influence on Rome’s mystical cult of Mithraism. What we now find is that a version of these Mithraic traditions was introduced into the early teachings at Chartres. For those readers who are interested in learning more about this, you will find the information in my book ‘The Pleiades Legacy (The Stone Age)

When I left Chartres cathedral, I noticed that the name of the main road on one side of the cathedral was Rue du Cheval Blanc ( Street of the White Horse ) . The white horse was of early Christian significance . In the end of the world prophecy , in Book of Revelation, (6.2), a conqueror appears one. On the other side of the cathedral, leading off of Rue du Soleil d’Or, ( street of the golden sun), I found a road called Rue Serpente. This animal was of universal significance especially among the Druids who believed that the world originated from an egg which emerged from the mouth of a snake.
Did the name of this street date back to the pre-Christian Druid era?
The ‘star-gods’, who are mentioned in many early legends, were symbolically associated with a serpent and with the end of the earlier ages of man which were reputedly destroyed by fire and water.
Now, here’s something that really blew my mind: Rue du Serpent is crossed by Rue des Changes and when arrived on that street, a fire had broken out in one of its buildings and the fire brigade was pumping in water to extinguish the flames. Wow, what a strange coincidence!
Opposite Rue Serpente, across Rue des Changes, I came across Rue au Lait, (Milk Street). Milk was of special religious significance in many early cultures and the Celts associated it with immortality.
The road crossing Rue au Lait is Rue aux Herbes and ‘herbs are a symbol that cures and brings back to life’ .
Rue au Lait meets Rue des Acacias beside the ‘cemetery’ at the rear of the cathedral. The acacia is an evergreen tree and , in Judeo-Christian tradition, it’s a solar symbol of rebirth and immortality and it’s linked with initiation and knowledge of ‘secret lore’ such as was taught at Chartres.

Chartres Cathedral is among the best preserved of the major French cathedrals, with extensive programmes of sculpture and stained glass.  It was a major site of pilgrimage in honour of the Virgin Mary, to whom the cathedral is dedicated.

This website http://images.library.pitt.edu/c/chartres/ , provides access to a comprehensive collection of images and detailed descriptions of Chartres Cathedral. 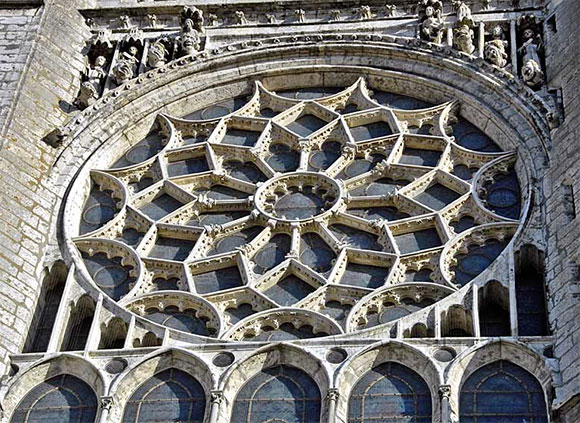 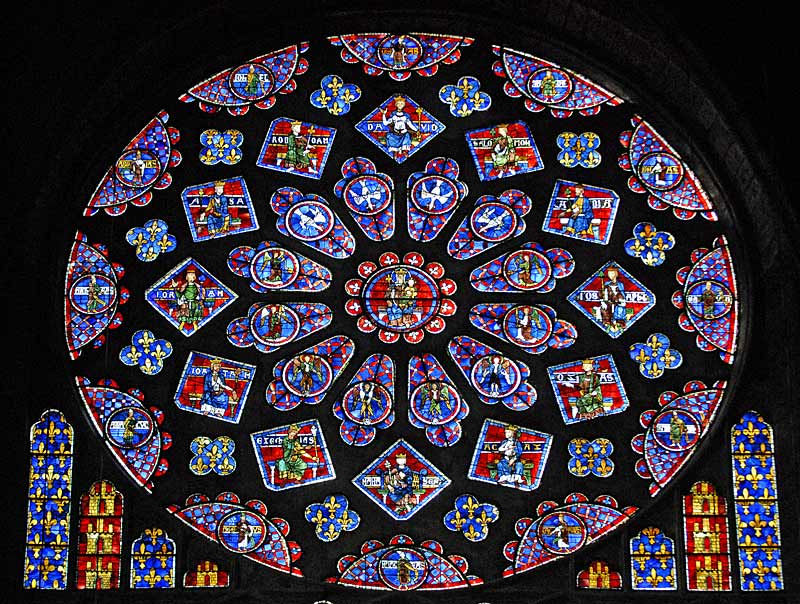