One of the most elegant pyramid building theories has been suggested by Polish engineer and inventor Andrzej Bochnacki.
In his book Different Story about Pyramids, he proposes very ingenious technology used to move the pyramid blocks from the quarries to the construction site.

NOTE: The following quotations from the book Different Story about Pyramids  are Copyright by Andrzej Bochnacki. All Rights Reserved. Reprinted with permission of the author.
”Light, made out of papyrus, boats were put on the top of blocks and tided up with ropes. These transport boats ware waiting for raising water of the Nile and they could be easily towed to a chosen destination. The simplest way was to haul them to the west side of the Nile where water flooded the fields. Here they were left in the mud to be transported on the land after the flood was over”.

“How, in ancient times, the difficult problem of boats loading and unloading process was solved explains the animation and drawing below”.

Animation showing phases of transporting stones from the tunnel to the ramp.
CLICK ON THE IMAGE TO VIEW ANIMATION
Copyright 2005-2006 by Andrzej Bochnacki.
Websites: http://www.swbochnacki.com/
http://republika.pl/bochnacki/
Presented with permission.

Was the Nile used in construction of the Pyramids?

Is it possible that the pyramids were built with help of the river Nile? This computer generated image shows probable course of Nile in Old Kingdom (the left channel). Note that Nile at flood stage pushed very close to the feet of major pyramid sites. This would make transportation of huge stone blocks from the quarries to the construction sites much easier. 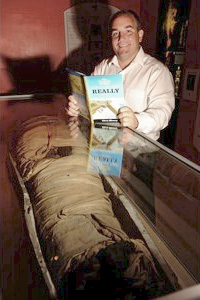 Chris Massey has written a book on how he believes the pyramids were built.
Chris is pictured with his book at Derby Museum alongside some of the mummies exhibited.
In his book he gives a detailed alternative theory of how the ancient Egyptians could have used water to their advantage to make pyramid building much easier.

Below are few youtube showing his theory on how the pyramids being constructed. 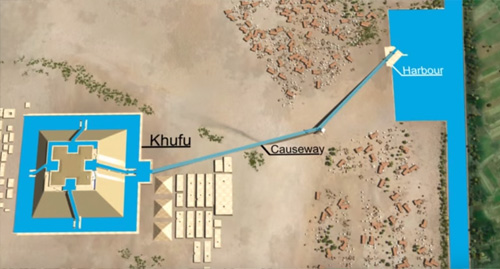 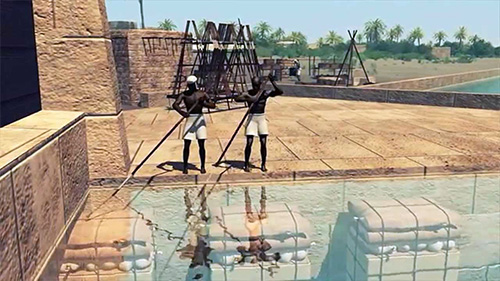 How were the pyramids of egypt really built – Part 1 Waterstones

The Experiment (A scale model to show the basic principles of my theory in action)
http://youtu.be/rxFXsoqbfrk

Addendum 2 (Multiple gates in the water shaft, how water pressure problems can be averted)

Very tall order as Chris shows how he would build pyramids

THE mystery surrounding how the ancient Egyptians built the pyramids may have been solved by a Derbyshire builder.

While holidaying in Egypt, Ashbourne construction firm boss Chris Massey argued with the tour guide about how giant blocks weighing several tonnes could be transported and placed with such accuracy.

Wound up by put-downs from fellow travellers and frustrated with guide books, he put on his thinking fez to figure out how he would do it.

Approaching the problem of building a pyramid as construction contractor, he may have come up with a theory that helps explain a conundrum that has baffled the finest minds for thousands of years.

Mr Massey decided the best way to get the job done on time and on budget would be to use the nearby Nile, papyrus plants and inflated animal skins to float building materials into place.

His theory and the story behind how it came about is explained in The Pyramids Of Egypt – How Were They Really Built? 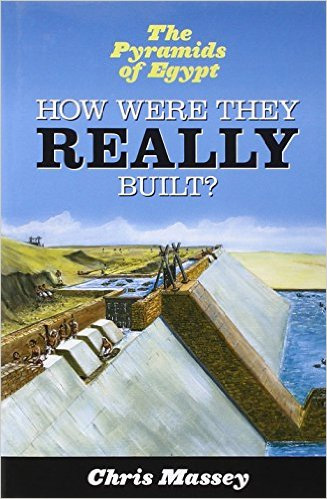 When construction project manager Chris Massey set off on a surprise trip to Egypt it seemed he was in for a relaxing time – a cruise down the Nile, a hot air balloon ride over the Valley of the Kings, sunbathing by the Red Sea and guided tours of the most spectacular ancient structures in the world…
But wherever he looked, he saw problems with the perceived wisdom on how the pyramids, temples and tombs of the pharaohs were built:

If limestone blocks were dragged up a mud brick ramp to be placed at the top of the Great Pyramid, where is the evidence of this huge ramp? How could materials such as wooden rollers and mud bricks take the strain put on them by tons of stone? Thousands of men are supposed to have dragged the building blocks across the desert in the searing heat – how did the ancient project managers keep morale up amongst the dusty and tired workforce?

Surely there must have been an easier way? Massey looked around him and saw the greatest resource available to the Egyptians – the waters of the mighty Nile.

This engaging account is the result of Massey’s pool-side ponderings, in which he gives a detailed alternative theory of how the ancient Egyptians could have used water to their advantage to make pyramid building much easier.

The bulk of Egyptologists suggest that building materials for the Great Pyramid were transported by boat from quarries, then dragged up ramps made of mud bricks using timber rollers.

As the boss of pre-cast concrete firm Beresford’s Flooring, Mr Massey has the kind of practical know-how of lifting heavy beams far beyond the experience of scholars of ancient Egypt.

“He was full of himself and arrogant but couldn’t answer my questions about building methods and I didn’t think much of the conventional theory.
“I’m used to getting straight answers from architects and engineers.
“If I asked a team to move a two-tonne beam with rollers, they wouldn’t be happy because, even with today’s scaffolding tubes across a concrete floor, the smallest pebble can cause you problems.
“Across the desert, it would be impossible.”

Nor does he believe that mud-brick ramps were used to move blocks up the side of the partially-built pyramid because, he thinks, it would have taken nine billion bricks to produce a workable gradient, it would not be strong enough and the sheer volume of material required would make the task unfeasible.

Even today, the UK brick industry only produces two billion bricks each year.

“The guide spoke about hundreds of thousands of square metres of material being quarried, moved and compacted as if it was a few barrows full,” said Mr Massey.

“My men moan when they have to barrow six metres of ready-mix concrete from the back of a mixer wagon.

“And the Egyptians would have to do that in 50-degree heat up a slope.”

Instead, from the quarry to the building site, Mr Massey believes that animal skins, known to be used to transport wine and water, could be inflated and attached to blocks which could then be floated down the Nile, pulled by oxen.

Then, on arrival at the plateau, via a shaft filled with water and regulated by lock gates, he says blocks could have been floated up the side of a partially-built pyramid into water-filled gullies. About 20,000 people have already viewed Mr Massey’s scale-model experiments on YouTube, sparking heated debate.

“If I were building the Great Pyramid, the first thing I’d do would be to look at the expertise and resources available to me,” said Mr Massey.
“They had buoyant papyrus, lots of animals and everyone depended on the Nile and knew about the properties of water.
“In the industrial revolution, when coal had to be transported all over the country, they dug canals rather than use an army of men, carts and shire horses.
“I cannot believe that a culture like the Egyptians’ would come up with such a clumsy way of building with the resources they had.”