Seahenge, also known as Holme 1, consisted of a ring of fifty-five oak trunks that formed a circular enclosure with a large inverted oak stump in the centre. The trunks were placed in a trench and not in individual holes with their bark facing outwards and split sides facing inwards. Placed about 3 ft into the ground, we will never know how tall the trunks actually were. It was built around the 21st century BC. After its discovery in 1998, the site was excavated despite protests from Neo-pagan groups and the timbers were cleaned and placed in permanent storage. A recreated Seahenge was placed at the original site and a museum opened to the public in 2008. 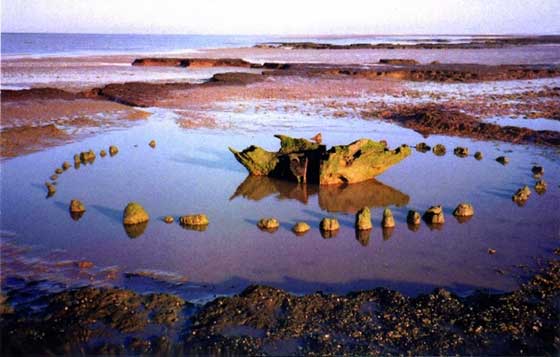 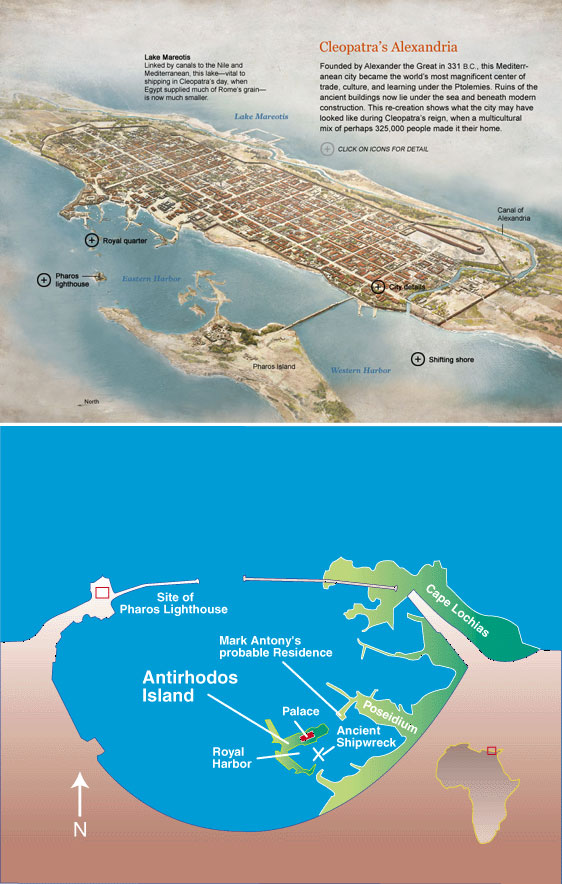 Lost more than 1600 ago, Cleopatra’s palace as well as the temple of Isis was discovered in the archaeological waters of Alexandria. Legend holds that Cleopatra and Marc Anthony committed suicide to avoid capture by the Romans, who in turn destroyed and dispersed their belongings. Up to date, archaeologists have found three areas where they believe their tomb to be. More than 140 artifacts have been excavated so far, and excavation work continues to this day at the submerged royal quarters. Archaeologists are also researching the possibility of an underwater museum at the site. 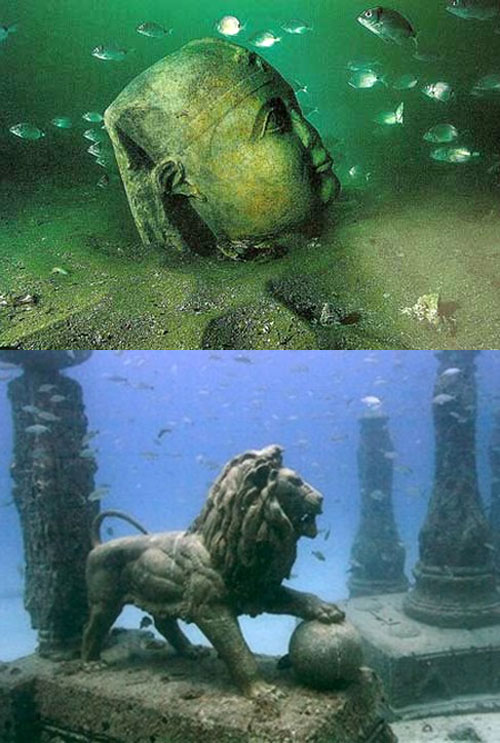 Herakleion and Canopus were the twin cities guarding the gateway to Egypt. Herakleion was also home to Menelaus, king of Sparta, during his famous 10-year war against Troy. More than 1200 years ago, the cities abruptly collapsed when a flood turned the ground on which they were built into silt. Until their discovery in 1999, the only proof of their existence came from the texts of a few venerable historians and Greek mythology. The ancient ruins were discovered at depths of 20 – 23 feet (7 m), frozen in time, with its many temples, statues and other dwellings still demonstrating its former glory. 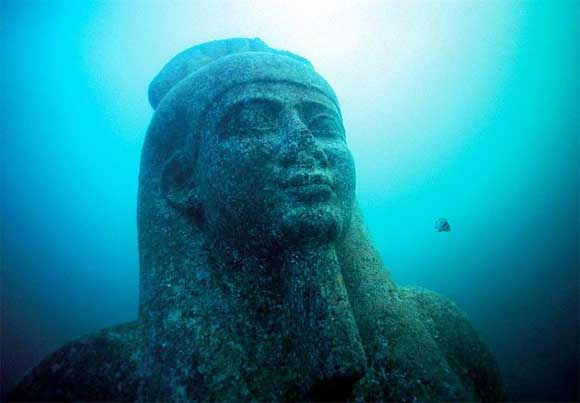 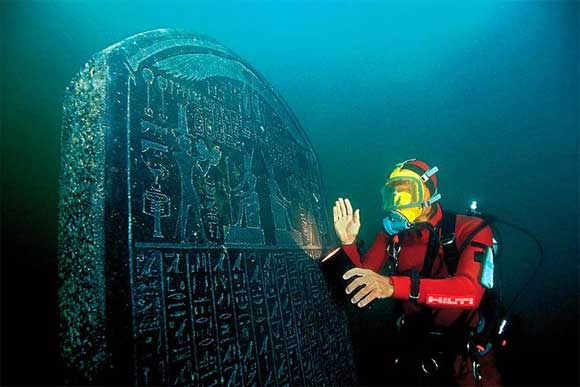 Baiae was the home port of the Western Imperial fleet of Rome. Playground of the filthy rich and infamous for its corruption and decadence the site has delivered numerous Roman sculptures. As a stockpile of casts were discovered, some believe a workshop probably mass-produced copies of original bronze sculptures for the Roman market. Baiae was annihilated by Muslim invaders in the 8th century AD and completely abandoned by 1500. Due to the volcanic activity of the area, the structure ultimately collapsed into the ocean. 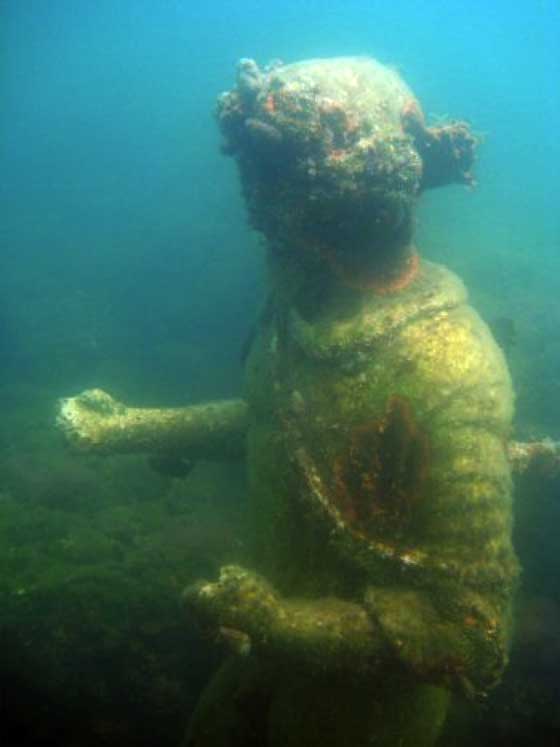 Pavlopetri is unique as it is the earliest submerged archaeological city to have been discovered. It had a layout of streets, courtyards, tombs and various buildings that has largely remained as it was millennia ago. Accurately mapped for the first time in 2009, archaeologists were amazed to discover the site sprawled more then 30,000 square meters. The town was engulfed around 1000 BC by an earthquake. A protected underwater cultural heritage site as listed by UNESCO, it remains in danger of being damaged by thieves, tourists and boat anchors. 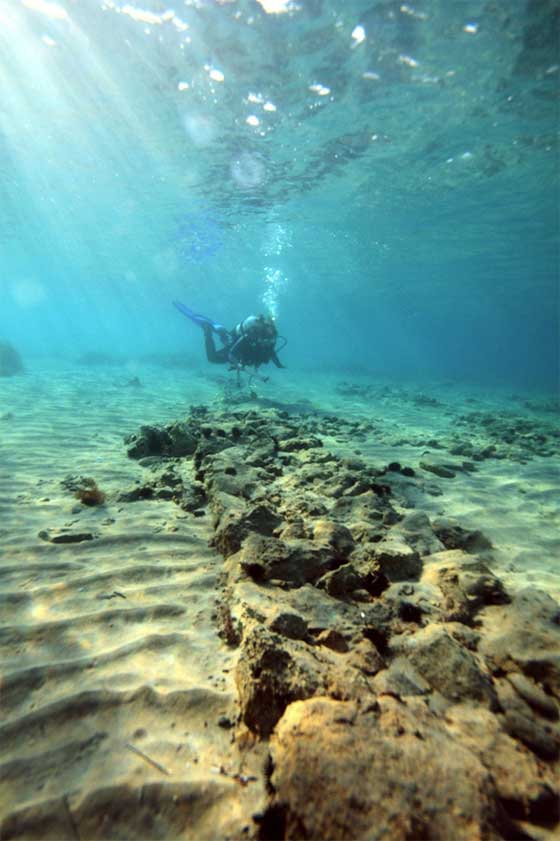 The complex mix of expert archaeology, underwater robotics and state of the art graphics allowed the team to piece together the secrets of Pavlopetri, producing spectacular results. 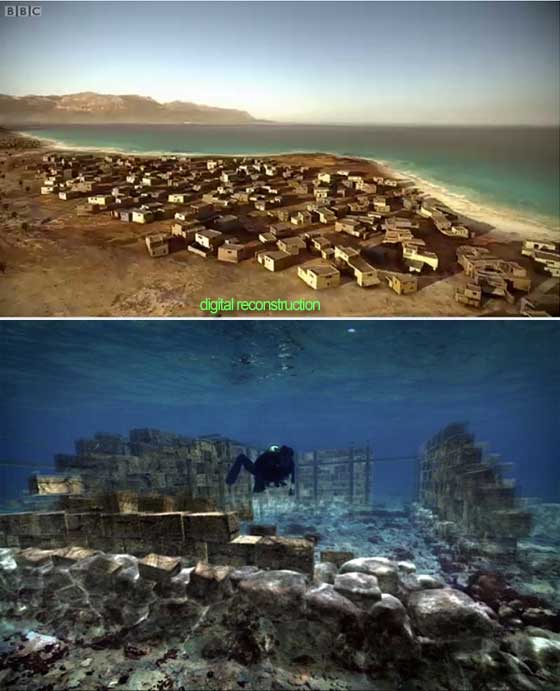 Dating from around 7000 BC, this is one of the oldest and largest submerged human dwellings ever discovered. In fact, for 9000 years the granular ocean floor preserved the site so well, that bugs can still be found in the grain stores and the skeletons are still lying peacefully in their graves. The ruins were discovered in 1984 and immediately gave rise to different theories as to how the well-developed ancient village met its ultimate demise. From a tsunami to the gradual rise of the ocean due to the systematic melting of the glaciers, the events leading to its ultimate fate will forever be shrouded in mystery. 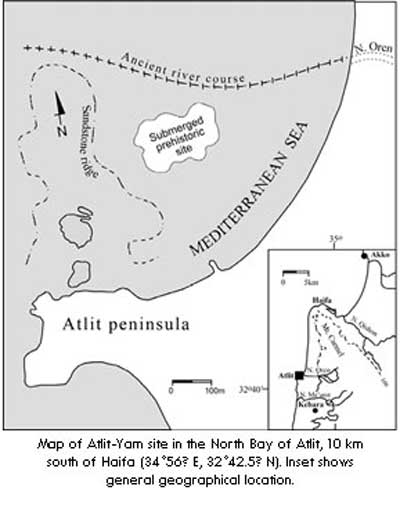 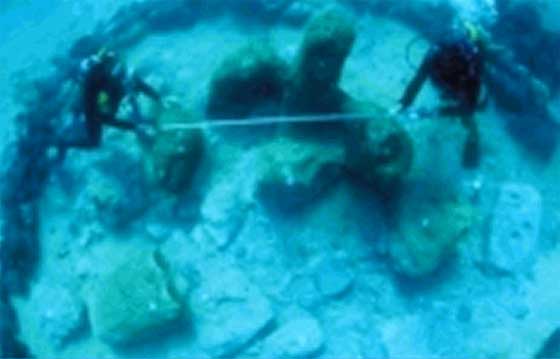 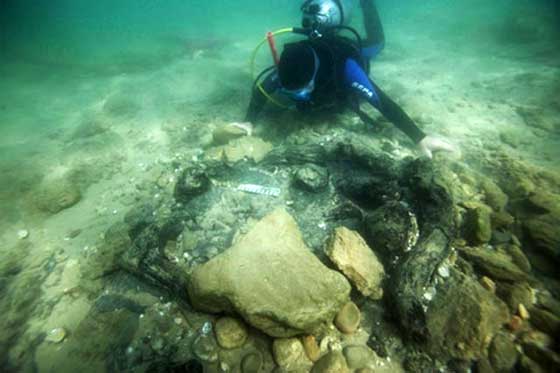 Home to prostitutes and pirates, Port Royal used to be the “Wickedest City on Earth”. Founded in 1518, it was a notorious port city and popular abode for English and Dutch privateers until their governments cancelled their commissions to confiscate Spain’s ships. As the privateers became pirates, the port became the hotspot for pirates from as far away as Madagascar. Destroyed and sunk in part after an earthquake in 1692, excavations have yielded historical documents, various buildings, thoroughfares and actual preserved food. Various plans are in the pipeline to redevelop the town into a main tourist destination. 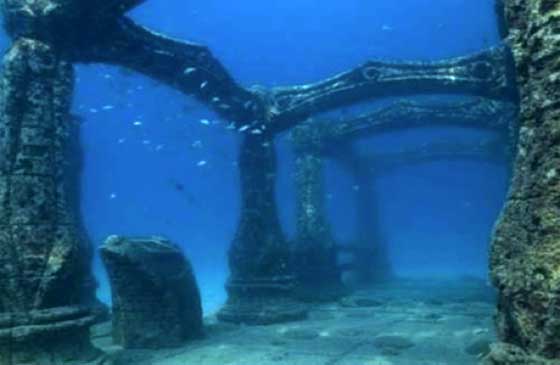 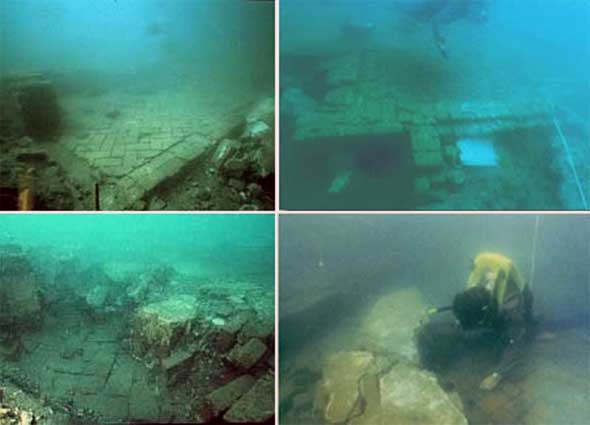 The famous Mahabalipuram temple has always been encased in folklore. The legends spoke of seven temples that were so dazzling; the gods grew envious and sent a flood that submerged all but one of them, leaving the Shore Temple companionless. After the Tsunami of December 2004, a collapsed temple as well as several other structures and primordial rock sculptures used in the same era to decorate walls and religious shrines were exposed. It revived theories that Mahabalipuram formed part of the Seven Pagodas the first Europeans wrote about. 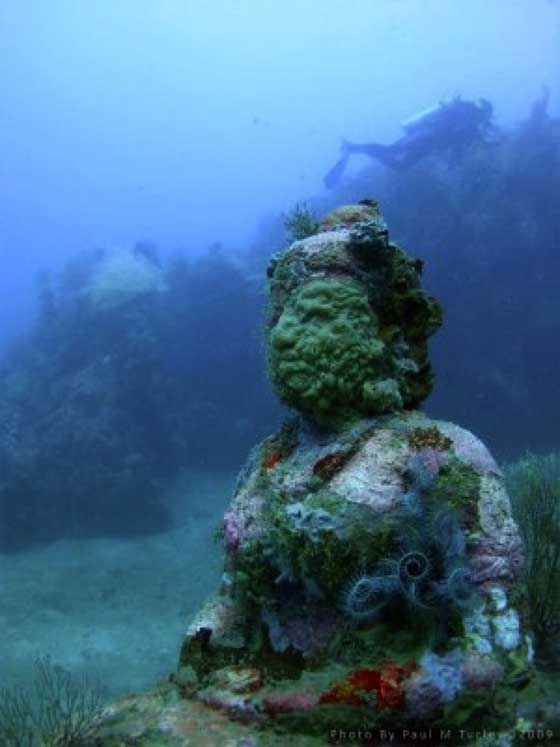 A few years back discovered the remains of a vast 9,500 year old city. This submerged ruin has intact architecture and human remains. More significantly, this find predates all finds in the area by over 5,000 years, forcing historians to reevaluate their understanding of the history of civilazation in the region. The find has been termed Dwarka, or the ‘Golden City,’ after an ancient city-in-the sea said to belong to the Hindu god Krishna.

The Bimini Road, sometimes called the Bimini Wall, is an underwater rock formation near North Bimini island in the Bahamas. The Road consists of a 0.8 km (0.50 mi)-long northeast-southwest linear feature composed of roughly rectangular to subrectangular limestone blocks. 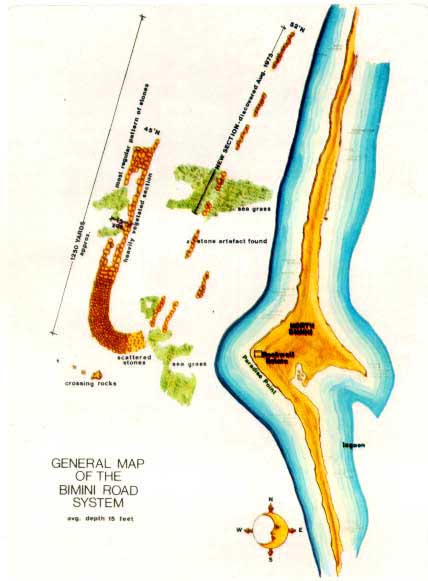 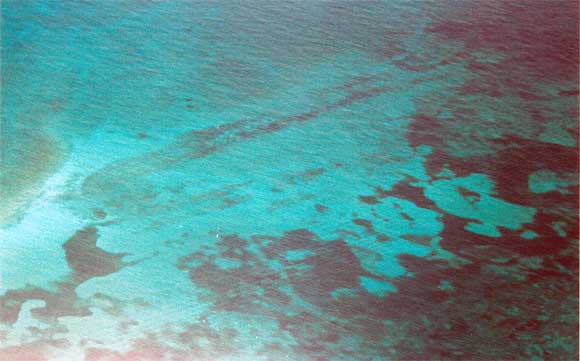 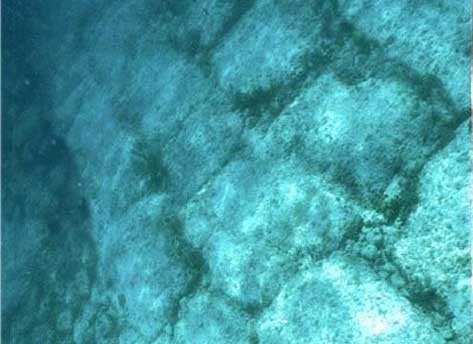 Although it is generally considered to be a naturally occurring geological feature, as a result of the unusual arrangement and shape of the stones some believe that the formation is the remains of an ancient road, wall, or some other deliberately constructed feature. For example articles published in Argosy (an American pulp magazine) and either authored or coauthored by Robert F. Marx, a professional diver and visitor to the Bimini Road, argued that the Bimini Road is an artificial structure.

A mysterious undersea structure off the coast of Japan causes controversy – is this a natural geological phenomena or a man-made structure which changes the history books as we know them?

In 1986, a diver near the island of Yonaguni Jima, off the southern tip of Japan (around Okinawa) came across some strange structures about 25 metres below sea level. They appeared to be stepped structures with terraces and ramps. One of the largest pyramid structures is 600 feet wide and 90 feet high –with five separate levels of stone blocks with what appears to be road surrounding the structure.

These structures seem to have been carved right out of bedrock in a teraforming process using tools previously thought unavailable to ancient cultures of the region.

A team of scientists continues to explore megalithic ruins found in the Yucatan Channel near Cuba. They have found evidence of an extensive urban environment stretching for miles along the ocean shore. Some believe that the civilization that inhabited these predates all known ancient American cultures. So far, only computer models of this mysterious underwater city exist. 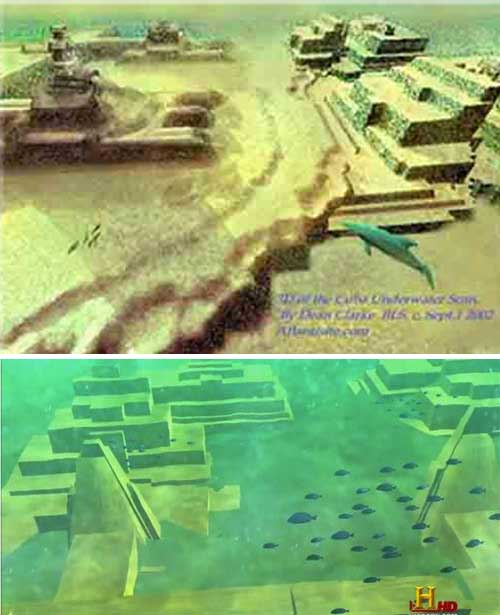 Discovered in 1996, researchers have concluded that the ruins were originally an island until volcanic activity or a landslide sunk it 1700 years ago. 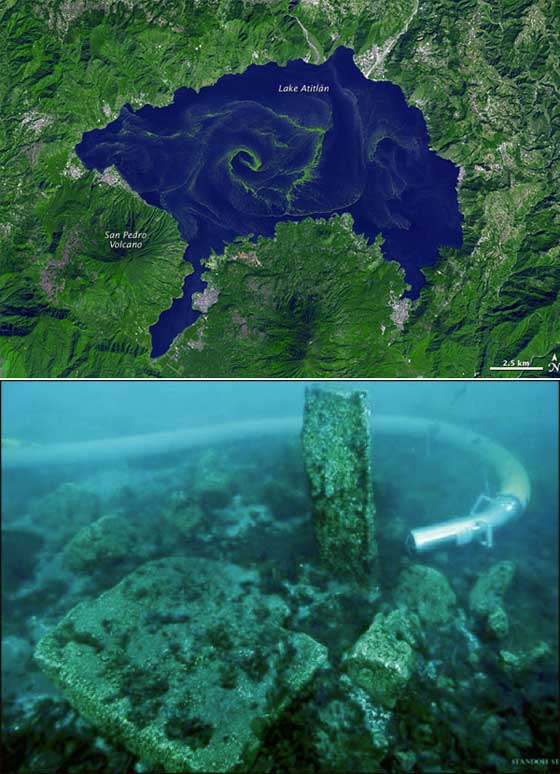 The buildings were drowned before the era of Mayan rule and artifacts discovered have left the impression that the area was abandoned in a hurry. Several ceremonial monuments have been uncovered as well as altars, incense burners, ceramics and other artifacts. Excavations are extremely demanding as the visibility is close to none and everything is covered with a very thick layer of silt.

Sunken Realms: A Survey of
Underwater Ruins from Around the World 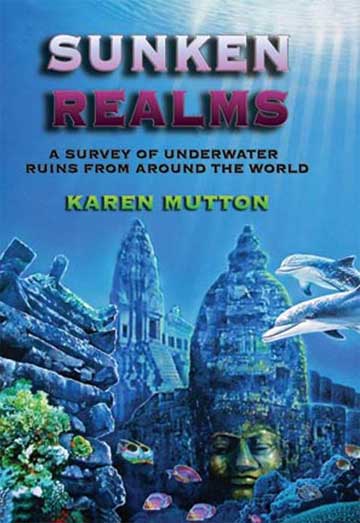 Australian researcher Karen Mutton has compiled the world’s most extensive list of sunken cities and megalithic underwater sites currently known around the world. She begins by discussing some of the causes for sunken ruins: super-floods; volcanoes; earthquakes at the end of the last flood; plate tectonics and other theories. She then discusses Plato’s Atlantis and the various areas of the Mediterranean and Atlantic that have been proposed as the location. From there she launches into a worldwide cataloging of underwater ruins by region. She begins with the many underwater cities in the Mediterranean, and then moves into northern Europe and the North Atlantic. She continues with chapters on the Caribbean and then moves through the extensive sites in the Pacific Ocean and Indian Ocean. The final chapters are on ruins and structures in lakes and inland seas plus a brief look at modern and medieval sunken ruins. Comes with plenty of maps, illustrations and rare photos. Places covered in this book include:

Being that mankind, especially in ancient times, liked to live along the coasts, it is not odd that this is where we find countless lost cities. This should be a warning to those who live on coasts now: You are at high risk for catrastrophic flooding caused by earthquakes, impact events, etc.

See also The Cycle of Cosmic Catastrophes: How a Stone-Age Comet Changed the Course of World Culture.

Good book for those of you obsessed with Atlantis or Lemuria.  See also: