Without knowledge of the past there is no future

This article “Without knowledge of the past there is no future.” was published in dutch in Civis Mundi, magazine for political philosophy and culture, director / editor of Civis Mundi: Prof. Dr. Wim Couwenberg. Civis Mundi aims to promote a scientifically- responsible  reflection on the foundations, ground problems, the establishment and functioning of our society in national and international context.

Current problems associated with the end of the third industrial revolution

Humanity is being confronted with the same problems as those at the end of the second industrial revolution such as decreasing stock exchange rates, highly increasing unemployment, towering debts of companies and governments and bad financial positions of  banks. Every production phase or civilization or other human invention goes through a so called transformation process, a transition.

In general transitions can be seen to go through the S curve and we can distinguish four phases:

When we look back over the past two centuries, we see three transitions taking place with far-reaching effects.

The first industrial revolution lasted from around 1780 tot 1850. It was characterized by a transition from small scale handwork to mechanized production in factories. The great catalyst in the process was the steam engine which also caused a revolution in transport as it was used in railways and shipping. The first industrial revolution was centered around the cotton industry. Because steam engines were made of iron and ran on coal, both coal mining and iron industry also flourished. 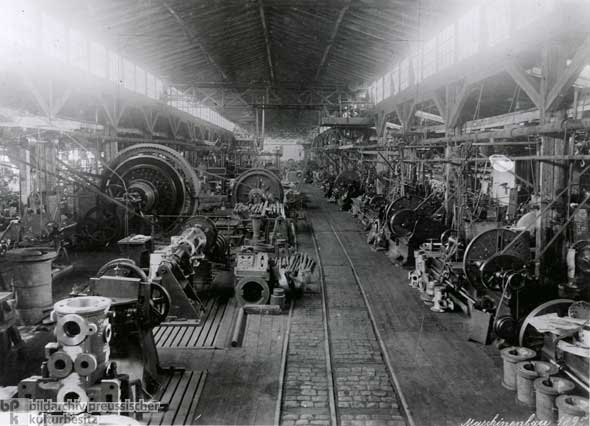 The beginning of the end of this revolution was in 1845 when Friedrich Engels, son of a German textile baron, described the living conditions of the English working class in “The condition of the working class in England“.

The second industrial revolution started around 1870 and ended around 1930. It was characterized by ongoing mechanization because of the introduction of the assembly line, the replacement of iron by steel and the development of the chemical industry. Furthermore coal and water were replaced by oil and electricity and the internal combustion engine was developed. 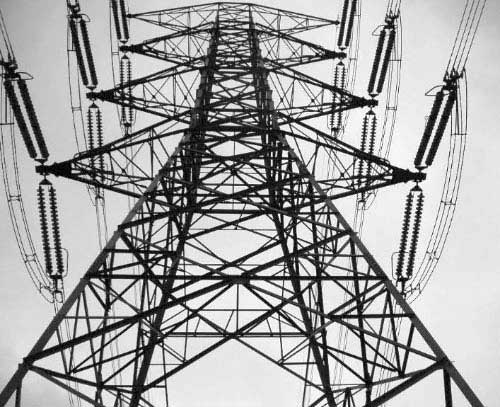 Whereas the first industrial revolution was started through (chance) inventions by amateurs, companies invested a lot of money in professional research during the second revolution, looking for new products and production methods. In search of finances small companies merged into large scale enterprises which were headed by professional managers and shares were put on the market. These developments caused the transition from the traditional family business to Limited Liability companies and multinationals.

After the roaring twenties the revolution ended with the stock exchange crash of 1929.

The third industrial revolution started around 1940 and is nearing its end. The United States and Japan played a leading role in the development of computers. During the Second World War great efforts were made to apply computer technology to military purposes. After the war the American space program increased the number of applications. Japan specialized in the use of computers for industrial purposes such as the robot. The acceleration phase of the third industrial revolution started around 1980 with the advent of the microprocessor. By now computer and communication technology take up an irreplaceable role in all parts of the world. 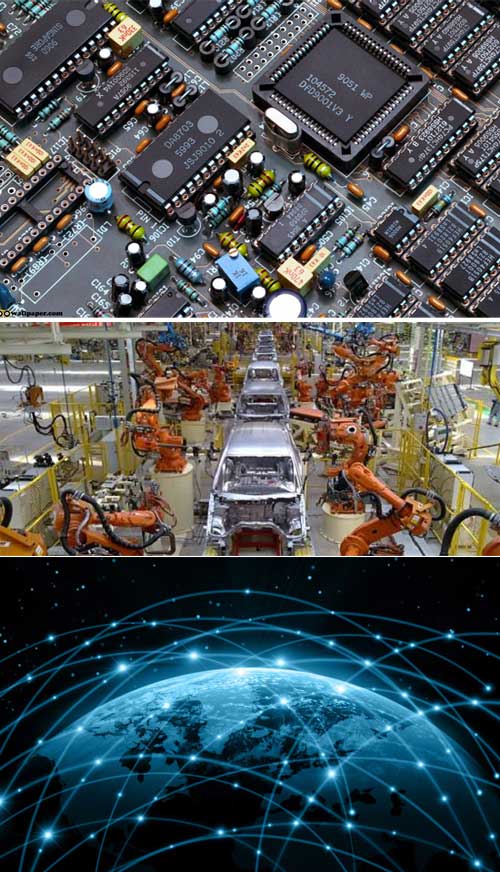 The first (and second revolution) transformed an agricultural society into an industrial society where mechanization (finally) relieved man of physical labor. The craft industry could not compete with the factories that put products of the same or even better quality on the market at a lower price. The result was that many small businesses went bankrupt and the former workers went to work in the factories. The effects of industrialization were seen in the process of rapid urbanization of formerly relatively small villages and towns where the new plants came. These turned into dirty and unhealthy industrial cities. Still people from the country were forced to go and work there. Because of this a new social class emerged: the workers, or the industrial proletariat. They lived in overcrowded slums in poor housing with little sanitation. The average life expectancy was low, and infant mortality high. The elite accepted the filth of the factories as the inevitable price for their success. The chimneys were symbols of economic power, but also of social inequality. You see this social inequality appear after each revolution. The gap between the bottom and the top of society becomes very large. Eventually there are inevitable responses that decrease this gap. It could be argued that the Industrial revolutions have created the conditions for a society with little or no poverty.

The third revolution transformed an industrial society into a service society. Where mechanization man relieved of physical labor, the computer relieved him of mental labor. This revolution made lower positions in industry more and more obsolete and caused the emergence of entirely new roles in the service sector.

The Dow Jones Industrial Average was first published halfway through the second Industrial Revolution, in 1896. The Dow Jones Industrial Average (DJIA) Index is the oldest stock index in the United States. This was a straight average of the rates of twelve shares. A select group of journalists from The Wall Street Journal decide which companies are part of the most influential index in the world market. Unlike most other indices the Dow is a price-weighted index. This means that stocks with high absolute share price have a significant impact on the movement of the index. 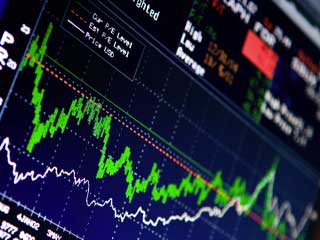 What does a stock exchange index like DJIA, S&P 500 really mean?

In many graphs the y-axis is a fixed unit, such as kg, meter, liter or euro. In the graphs showing the stock exchange values, this also seems to be the case because the unit shows a number of points. However, this is far from true! An index point is not a fixed unit in time and does not have any historical significance.

An index is calculated on the basis of a set of shares. Every index has its own formula and the formula gives the number of points of the index. Unfortunately many people attach a lot of value to these graphs which are, however, very deceptive.

An index is calculated on the basis of a set of shares. Every index has its own formula and the formula results in the number of points of the index. However, this set of shares changes regularly. For a new period the value is based on a different set of shares. It is very strange that these different sets of shares are represented as the same unit. After a period of 25 years the value of the original set of apples is compared to the value of a set of pears. At the moment only 6 of the original 30 companies that made up the set of shares of the Dow Jones at the start of the acceleration of the last revolution (in 1979) are still present.

Even more disturbing is the fact that with every change in the set of shares used to calculate the number of points, the formula also changes. This is done because the index which is the result of two different sets of shares at the moment the set is changed, must be the same for both sets at that point in time. The index graphs must be continuous lines. For example, the Dow Jones is calculated by adding the shares and dividing the result by a number. Because of changes in the set of shares and the splitting of shares the divider changes continuously. At the moment the divider is 0.132319125 but in 1985 this number was higher than 1. An index point in two periods of time is therefore calculated in different ways:
Dow1985 = (x1 + x2 + ……..+x30) / 1

In the nineties of  the last century many shares were split. To make sure the result of the calculation remained the same both the number of shares and the divider changed. An increase in share value of 1 dollar of the set of shares in 2013 results is 7.7 times more points than in 1985. The fact that in the 1990-ies many shares were split is probably the cause of the exponential growth of the Dow Jones index. At the moment the Dow is at 14659 points. If we used the 1985 formula it would be at 1908 points.

The most remarkable characteristic is of course the constantly changing set of shares. Generally speaking, the companies that are removed from the set are in a stabilization or degeneration phase. Companies in a take off phase or acceleration phase are added to the set. This greatly increases the chance that the index will rise rather than go down. This is obvious, especially when this is done during the acceleration phase of a transition. From 1980 onward 7 ICT companies (3M, AT&T, Cisco, HP, IBM, Intel, Microsoft) , the engines of the latest revolution were added to the Dow Jones and 5 financial institutions, which always play an important role in every transition.

This is actually a kind of pyramid scheme. All goes well as long as companies are added that are in their take off phase or acceleration phase. At the end of a transition, however, there will be fewer companies in those phases.

Calculating share indexes as described above and showing indexes in historical graphs is a useful way to show which the industrial revolution is in.

The third industrial revolution is clearly in the saturation and degeneration phase. This phase can be recognized by the saturation of the market and the increasing competition. Only the strongest companies can withstand the competition or take over their competitors (like for example the take-overs by Oracle and Microsoft in the past few years). The information technology world has not seen any significant technical changes recently, despite what the American marketing machine wants us to believe.

During the pre development phase and the take off phase of a transition many new companies spring into existence. This is a diverging process. Especially financial institutions play an important role here as these phases require a lot of money. The graphs showing the wages paid in the financial sector therefore shows the same S curve as both revolutions.

Investors get euphoric when hearing about mergers and take overs. Actually, these mergers and take overs are indications of the converging processes at the end of a transition. When looked at objectively each merger or take over is a loss of economic activity. This becomes painfully clear when we have a look at the unemployment rates of some countries.

Will history repeat itself?

Humanity is being confronted with the same problems as those at the end of the second industrial revolution such as decreasing stock exchange rates, highly increasing unemployment, towering debts of companies and governments and bad financial positions of  banks.

History has shown that five pillars are indispensable for a stable society: Food, Security, Health, Prosperity, Knowledge. Transitions are initiated by inventions and discoveries, new knowledge of mankind. New knowledge influences the other four components in a society. At the moment there are few new inventions or discoveries. So the chance of a new industrial revolution is not very high. At the end of every transition the pillar Prosperity is threatened. We have seen this effect after every industrial revolution.

The pillar Prosperity of a society is about to fall again. History has shown that the fall of the pillar Prosperity always results in a revolution. Because of the high level of unemployment after the second industrial revolution some societies initiated a new transition, the creation of a war economy. This type of economy flourished especially in the period 1940 – 1945.

Now, societies will have to make a choice for a new transition to be started.

Without knowledge of the past there is no future.

This article was published in dutch in Civis Mundi (The Netherlands 2012). Civis Mundi aims to promote a scientifically- responsible  reflection on the foundations, ground problems, the establishment and functioning of our society in national and international context.  Director / Editor of Civis Mundi: Prof. Dr. Wim Couwenberg