Every production phase or society or other human invention goes through a so-called transformation process. Transitions are social transformation processes that cover at least one generation. In this article I will use one such transition to demonstrate the position of our present civilization and and that a new stock market crash is inevitable. 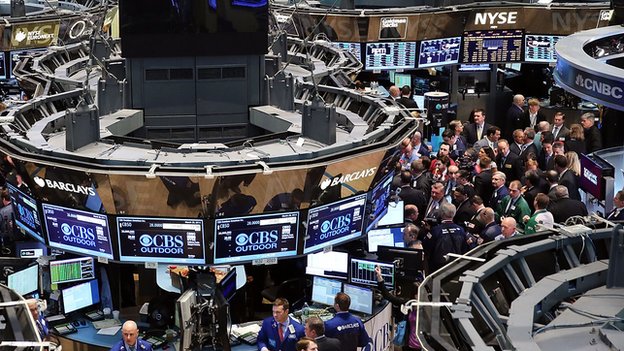 When we consider the characteristics of the phases of a social transformation we may find ourselves at the end of what might be called the third industrial revolution.

Figure: Four phases in a transition best visualized by means of an S – curve: Pre-development, Take off, Acceleration, Stabilization.

The S curve of a transition 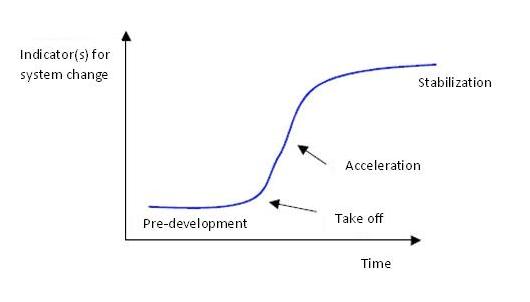 In general, transitions can be seen to go through the S curve and we can distinguish four phases (see fig. 1):

A product life cycle also goes through an S curve. In that case there is a fifth phase:

When we look back into the past we see three transitions, also called industrial revolutions, taking place with far-reaching effect:

The emergence of a stock market boom

The increase in the price-earnings ratio is amplified because many companies decide to split their shares during the acceleration phase of their existence. A stock split is required if the market value of a share has grown too large, rendering the marketability insufficient. A split increases the value of the shares because there are more potential investors when they are cheaper. Between 1920 – 1930 and 1990 – 2000 there have been huge amount of stock splits that impacted the price-earnings ratio positively.

Table 1: Share Splits before the stock market crash of 1929

The Dow Jones Index was first published on May 26, 1896. The index was calculated by dividing the sum of all the shares of 12 companies by 12:

On December 31, 1927, two years before the stock market crash in October 1929, for the first time a number of companies split their shares. With each change in the composition of the Dow Jones and with each share split, the formula to calculate the Dow Jones is adjusted. This happens because the index, the outcome of the two formulas of the two baskets, must stay the same at the moment of change, because there can not be a gap in the graph. At first a weighted average was calculated for the shares that were split on December 31, 1927.

From October 1st, 1928 onward an increase in value of the 30 shares means the index value almost doubles. From June 25th, 1929 onward it almost triples compared to a similar increase before stock splitting was introduced. Using the old formula the sum of the 30 shares would simply be divided by 30.

Figure: Dow Jones Index before and after Black Tuesday

During the acceleration phase of the third industrial revolution, 1990 – 2000, history has repeated itself. In this period there have again been many stock splits, particularly in the years 1997 and 1999.

The formula that was used on January 1, 1990 to calculate the Dow Jones:

The formula that was used on December 31, 1999 was to calculate the Dow Jones:

What does a stock exchange index like DJIA, S&P 500 or AEX mean?

The Dow Jones Industrial Average (DJIA) Index is the oldest stock index in the United States. This was a straight average of the rates of twelve shares. A select group of journalists from The Wall Street Journal decide which companies are part of the most influential index in the world market. Unlike most other indices the Dow is a price-weighted index. This means that stocks with high absolute share price have a significant impact on the movement of the index.

The Amsterdam Exchange index (AEX) is the main Dutch stock market index. The index displays the image of the price development of the 25 most traded shares on the Amsterdam stock exchange. From a weighted average of the prices of these shares, the position of the AEX is calculated.

In many graphs the y-axis is a fixed unit, such as kg, meter, liter or euro. In the graphs showing the stock exchange values, this also seems to be the case because the unit shows a number of points. However, this is far from true! An index point is not a fixed unit in time and does not have any historical significance.

An index is calculated on the basis of a set of shares. Every index has its own formula and the formula gives the number of points of the index. Unfortunately many people attach a lot of value to these graphs which are, however, very deceptive.

In the nineties of the last century many shares were split. To make sure the result of the calculation remained the same both the number of shares and the divider changed (which I think is wrong). An increase in share value of 1 dollar of the set of shares in 2015 results is 6.6 times more points than in 1985. The fact that in the 1990’s many shares were split is probably the cause of the exponential growth of the Dow Jones index. At the moment the Dow is at 16000 points. If we used the 1985 formula it would be at 2400 points.

February 19, 2008: Bank of America Corp. and Chevron Corp. replaced Altria Group Inc. and Honeywell International.?Altria was split into two companies and was deemed no longer suitable for the Dow.? Honeywell was removed from the Dow because the role of industrial companies in the U.S. stock market in the recent years had declined and Honeywell had the smallest sales and profits among the participants in the Dow.

April 8, 2004: Verizon Communications Inc., American International Group Inc. and Pfizer Inc. replace AT & T Corp., Eastman Kodak Co. and International Paper.?AIG shares had increased over 387% in the previous decade and Pfizer had an increase of more than 675& behind it. Shares of AT & T and Kodak, on the other hand, had decreases of more than 40% in the past decade and were therefore removed from the Dow.

Figure: Changes in the Dow Jones over the last two industrial revolutions

Figure: Exchange rates of Dow Jones during the latest two industrial revolutions. During the last few years the rate increases have accelerated enormously.

Calculating share indexes as described above and showing indexes in historical graphs is a useful way to show which phase the industrial revolution is in.

The third industrial revolution is clearly in the saturation and degeneration phase. This phase can be recognized by the saturation of the stock market and the increasing competition. Only the strongest companies can withstand the competition or take over their competitors (like for example the take-overs by Oracle and Microsoft in the past few years). The information technology world has not seen any significant technical changes recently, despite what the American marketing machine wants us to believe.

During the pre development phase and the take-off phase of a transition many new companies spring into existence. This is a diverging process. Especially financial institutions play an important role here as these phases require a lot of money. The graphs showing the wages paid in the financial sector therefore shows the same S curve as both revolutions.

Investors get euphoric when hearing about mergers and take overs. Actually, these mergers and take overs are indications of the converging processes at the end of a transition. When looked at objectively each merger or take over is a loss of economic activity. This becomes painfully clear when we have a look at the unemployment rates of some countries.

In a (threatening) recession, the central bank tries to stimulate the economy by lowering interest rates. Loans are thus cheaper, allowing citizens and businesses to spend more. In the event of sharply rising unemployment and falling prices, however, this does significantly less. This is also the case as the official interest rates are lower, or even fall to essentially zero. Regardless of the interest rate (big) loans are not concluded and expensive purchases will be delayed. Further rate cuts or even an interest rate of zero may not lead to an increase in economic activity and falling demand leads to further price declines (deflation). The central bank may decide in that case to increase the money supply (quantitative easing). A larger money supply actually leads to price increases and disruption of the deflationary spiral. In the past the printing presses would be turned on but nowadays the central bank buys government bonds, mortgage bonds and other securities and finances these transactions by increasing the personal balance. There are no extra physical bank notes printed. The mechanism works by means of central banks buying bonds in the stock market or directly from banks. Banks are credited for the purchase amount in the accounts held with the central bank. In this way, banks obtain liquidity. In response to this liquidity banks can then provide new loans.

Figure: The quantitative easing policy of the Fed (US central bank) and its effect on the S&P 500

Due to the combination of interest rate policy and quantitative easing by central banks a lot of money has flowed the stock markets since 2008 and has in fact created a new, fictional bull market. This is evident in the price-earnings ratio chart (Shiller PE Ratio), which has risen again since 2008. But central banks now have no more ammunition to break the deflationary spiral. At the end of the 2ndindustrial revolution in 1932 the PE Ratio dropped to 5. Currently, this ratio, partly due to the behavior of central banks, is 23. The share prices can still go down by a factor 4

Will history repeat itself?

Humanity is being confronted with the same problems as those at the end of the second industrial revolution such as decreasing stock exchange rates, highly increasing unemployment, towering debts of companies and governments and bad financial positions of banks.

Figure: Two industrial revolutions and the debt of America

Transitions are initiated by inventions and discoveries, new knowledge of mankind. New knowledge influences the other four components in a society. At the moment there are few new inventions or discoveries. So the chance of a new industrial revolution is not very high. History has shown that five pillars are indispensable for a stable society.

At the end of every transition the pillar Prosperity is threatened. We have seen this effect after every industrial revolution.

The pillar Prosperity of a society is about to fall again. History has shown that the fall of the pillar Prosperity always results in a revolution. Because of the high level of unemployment after the second industrial revolution many societies initiated a new transition, the creation of a war economy. This type of economy flourished especially in the period 1940 – 1945.

Now, societies will have to make a choice for a new transition to be started.

Without knowledge of the past there is no future.