For the past nine years the Iraqi Dinar has had a crowd of hopeful, devoted and sometimes discouraged followers.  Imagine being able to buy a million Iraqi Dinar for $1170.  One thing we can all agree on is that the current Dinar is worthless.  But many believe it is no more than a scam and will never be worth anything. While others believe that the Dinar will not only give the global economy a shot in the arm but will make a whole slew of regular folk multi-millionaires.  The debate rages. The establishment scoffs and the “Dinarians” wait with hungry anticipation.  Now there have been scams surrounding the Dinar.  Some have sold counterfeit bills and others old Dinars with Saddam’s picture on it.  But according to all sources, it is legitimately worthless at its present value. The real thing has many security features as seen in the photo below. 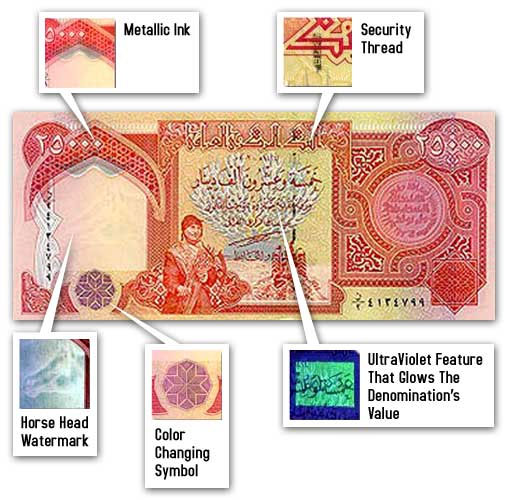 The question is, will it ever be worth anything and if so, what impact will it have on Iraq.  Because of the continual failure of fiat currency (paper money) and the impracticality of going back to the gold standard, there is a push to a resource based valuation of currency.  Bretton Woods and Keynes anticipated this methodology but it was never implemented.

So I am going to give you my version of the GOOD NEWS first and then the BAD NEWS.  Not only have I been following this carefully for several years, I have 30 years experience in international business and have made several trips to the Middle East – mainly Kuwait between the two Gulf Wars.

The good news is that the RV of the Iraqi currency is all over the news, both here and Iraq.  A year or so ago, no one in the Iraqi government or central bank even talked about an RV.  Now, it is all over the news every day.  It turns out that there is a lot more involved than any of us every could have imagined.  The fact that so many high in the Iraqi government and CBI (central bank) are talking about the revaluation process clearly indicates they are working on it and it probably will happen.

A mini-industry of “Dinar Gurus” has arisen and these gurus have developed contacts all over the world.  They raise some good points.  Yes, in order to function in the modern world economy, Iraq needs to have a “tradeable currency” to pay contractors, debts, function in OPEC, the WTO (World Trade Organization), etc.  This is all true, but when these Gurus start saying that it the RV is in the hands of the UN, the World Bank, the IMF, the US Treasury, the EEC (Europe), the Bildebergers, and so forth (super rich and powerful pulling strings in the background), they are wrong.  This is not about us.  It is not about the world (although it would certainly help the global economy).  It is about a struggling, divided country called Iraq.  It is about Parliamentarians who are lucky if they have a grade school education, no experience in democracy, debate or compromise.  It is about how they are going to divide up the wealth (the HCL – hydrocarbon law and Erbil agreements) – like in Kuwait where the money is passed out to everyone.

There are many factions in Iraq: the Sunni, Shiite and Kurds, plus regional tribes.  They are all jockeying for control and a piece of the action.  There are also laws that need to be passed such as how you transition from the worthless Dinar to a higher value Dinar.  The good news is they are gradually coming to agreement on the issues.  But think about it for a moment – after 30 years of dictatorship and war, they are learning to govern themselves for the very first time.  Bottom line?  This is their currency, their country and they will revalue (RV) their currency when they are good and ready.  It is up to them, not some “three letter” agency.  So when will the RV occur?  When they are ready!

Now we come to the rate.  If you hear the zeros will be dropped and investors see nothing, or that it will be worth $12 to one Dinar, don’t believe it.  The Iraqi leaders, including Shabibi (he is head of their Central Bank) have made a couple of conflicting statements.  They say the Dinar will be on par with the US dollar.  They have also said it would be the most valuable currency in the region (putting it over $3).  I would look for the rate to be somewhere between one and three dollars and change.  Again, no one knows.

The other misconception spread on the internet is that there will be a rolling RV either spreading out in a circle from Iraq or following the sun around the world.  Some say there will be one price in country and another for different countries.  Others say there will be a different rate for different tiers of people (super elites, countries, business and the rest of us).  That is not the way Forex (the foreign exchange markets) works.  The 1170 rate has held for years.  The value of a currency (with a “buy” and “sell” rate) is the same in every bank and exchange point around the world.  No one will know a minute sooner than another person.  Why?  That would open up the equivalent of “insider trading” – giving some a tremendous advantage to buy up currency at lower rates.  It will go live worldwide with the same rates for everyone!  The buy/sell spread may vary.  Think of an RV as the Second Coming.  No one and I mean no one knows when or how much, the rate or the date.  It will happen in the twinkling of the eye.

In summary, if you Google the Dinar, the internet will tell you this is a scam.  All I can say is that a lot of people are misinformed.  There is a great deception across the land on this and many other issues, especially when it comes to the economy.  So let’s look at Iraq for a moment.  We are not talking about Zimbabwe or Somalia.  Iraq has proven wealth (agricultural, mineral and oil).  In spite of the war, it has had a stable currency with low inflation.  In order to function in the world of nations, one thing is true.  It needs to have a “tradeable currency” not to say they can’t muddle through for years at a time.  The only question is when?  How have they gotten by the past 8 years?  They have used US dollars.  Long term, this is not a sustainable solution but they have proved they are in no hurry to make the change.  After 30 years they are playing catch up and there are many things that have to be done, laws that have to be passed, systems and procedures that need to be in place.  They will RV when they are ready.

So why do we say that the revaluation of the Iraqi Dinar could be a God-send?  Obviously, it would make some folks very rich.  But think of it.  It is reported that the U.S. has several trillion Dinars (Bush Jr announced in the beginning that the war would be paid for, just as Bush Sr. did).  If the Dinar was valued at $3 and change, that would mean an injection of nearly $10 trillion into the U.S. economy.  This could bail out Obama.   It is also reported that various European countries also hold Dinar – quite a shot in the arm for the Euro.  China and other countries hold Dinar as well.  We may never know the full impact.  It is reported (but hard to verify) the revaluation of the Kuwaiti Dinar led to Clinton’s surplus budgets.  That would certainly be a “God-send.”

Counting on a Dinar RV is still very high risk because this is the Middle East.  A shooting war in the region involving Iran, Israel or Syria could definitely delay or derail an Iraqi RV.  Anyone who knows the region or Bible prophecy, knows this isn’t just a possibility, but inevitable.   So here’s hoping for a few good years…

Presented with permission of the author
http://www.the-tribulation-network.com/

Note: This is a follow-up to the  series of articles by the author:

Here are all guest articles by the author:
https://blog.world-mysteries.com/dene-mcgriff-guest_authors/