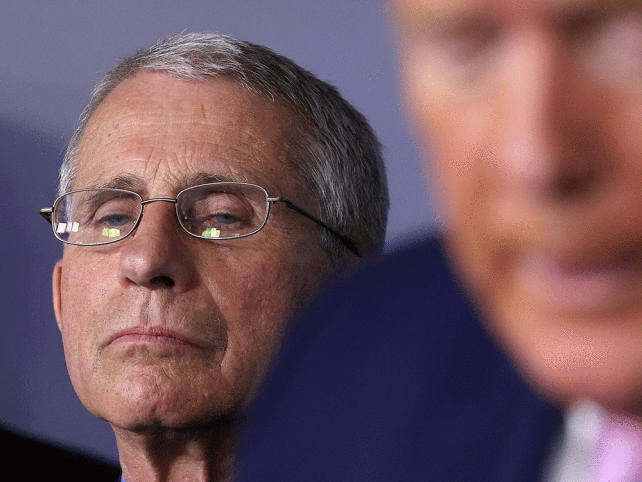 “Did I do that?”
Below are some answers

Coronavirus Gain of Function Research in Wuhan was paid by Dr. Fauci 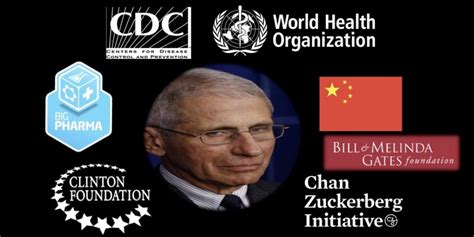 In 2019 the National Institute for Allergy and Infectious Diseases, the organization led by Dr. Fauci, funded scientists at the Wuhan Institute of Virology and other institutions for work on gain-of-function research on bat coronaviruses.

In 2019, with the backing of NIAID, the National Institutes of Health committed $3.7 million over six years for research that included “gain-of-function” work. The program followed another $3.7 million, 5-year project for collecting and studying bat coronaviruses, which ended in 2019, bringing the total to $7.4 million. […]

A decade ago, during a controversy over gain-of-function research on bird-flu viruses, Dr. Fauci played an important role in promoting the work. He argued that the research was worth the risk it entailed because it enables scientists to make preparations, such as investigating possible anti-viral medications, that could be useful if and when a pandemic occurred.

The work in question was a type of gain-of-function research that involved taking wild viruses and passing them through live animals until they mutate into a form that could pose a pandemic threat. Scientists used it to take a virus that was poorly transmitted among humans and make it into one that was highly transmissible—a hallmark of a pandemic virus.

Bombshell Conclusions of an Investigation into the Coronavirus Origins

Dr. Anthony Fauci is an adviser to President Donald Trump [ AND NOW CHIEF COVID-19 ADVISOR TO PRESIDENT BIDEN] and something of an American folk hero for his steady, calm leadership during the pandemic crisis. At least one poll shows that Americans trust Fauci more than Trump on the coronavirus pandemic—and few scientists are portrayed on TV by Brad Pitt.

But just last year, the National Institute for Allergy and Infectious Diseases, the organization led by Dr. Fauci, funded scientists at the Wuhan Institute of Virology and other institutions for work on gain-of-function research on bat coronaviruses.

In 2019, with the backing of NIAID, the National Institutes of Health committed $3.7 million over six years for research that included some gain-of-function work. The program followed another $3.7 million, 5-year project for collecting and studying bat coronaviruses, which ended in 2019, bringing the total to $7.4 million.

Many scientists have criticized gain of function research, which involves manipulating viruses in the lab to explore their potential for infecting humans, because it creates a risk of starting a pandemic from accidental release.

SARS-CoV-2 , the virus now causing a global pandemic, is believed to have originated in bats. U.S. intelligence, after originally asserting that the coronavirus had occurred naturally, conceded last month that the pandemic may have originated in a leak from the Wuhan lab. (At this point most scientists say it’s possible—but not likely—that the pandemic virus was engineered or manipulated.)

The work in question was a type of gain-of-function research that involved taking wild viruses and passing them through live animals until they mutate into a form that could pose a pandemic threat. Scientists used it to take a virus that was poorly transmitted among humans and make it into one that was highly transmissible—a hallmark of a pandemic virus. This work was done by infecting a series of ferrets, allowing the virus to mutate until a ferret that hadn’t been deliberately infected contracted the disease.

The work entailed risks that worried even seasoned researchers. More than 200 scientists called for the work to be halted. The problem, they said, is that it increased the likelihood that a pandemic would occur through a laboratory accident.

Nevertheless, in 2014, under pressure from the Obama administration, the National of Institutes of Health instituted a moratorium on the work, suspending 21 studies.

Three years later, though—in December 2017—the NIH ended the moratorium and the second phase of the NIAID project, which included the gain-of-function research, began. The NIH established a framework for determining how the research would go forward: scientists have to get approval from a panel of experts, who would decide whether the risks were justified.

The reviews were indeed conducted—but in secret, for which the NIH has drawn criticism. In early 2019, after a reporter for Science magazine discovered that the NIH had approved two influenza research projects that used gain of function methods, scientists who oppose this kind of research excoriated the NIH in an editorial in the Washington Post.

“We have serious doubts about whether these experiments should be conducted at all,” wrote Tom Inglesby of Johns Hopkins University and Marc Lipsitch of Harvard. “With deliberations kept behind closed doors, none of us will have the opportunity to understand how the government arrived at these decisions or to judge the rigor and integrity of that process.”

The Truth is often “hidden in plain sight”…

In October 2019, some of the world’s most powerful business and political leaders met to discuss how to prepare for such a crisis. And now we have the coronavirus outbreak reaching every corner of the world. It’s becoming clearer everyday that socialists are going to use this pandemic to achieve their ultimate goal: global control.

In 2019 the National Institute for Allergy and Infectious Diseases, the organization led by Dr. Fauci, funded scientists at the Wuhan Institute of Virology and other institutions for work on gain-of-function research on bat coronaviruses.

In 2010, Glen Nowak, Ph.D., as then Acting Director of Media Relations for the CDC and Communications Director for the National Immunization Program (NIP), produced a guide to how to create public panic to encourage people to get vaccinated against the flu. It reads like a blueprint for the German Federal Ministry of the Interior’s corona panic communication.

Yale University is conducting a study to figure out how to best create effect “messaging” in order to convince Americans to take the upcoming C0VlD vaccine. In reality, their methods are nothing short of manipulation. We break them down in detail.  Yale Study To Manipulate Americans Into Taking C0VlD Vaccine
Check out our NEW Free Speech Platform https://ISE.Media. Posted by Ben Swann on Wednesday, August 5, 2020

The Roadmap to the Agenda 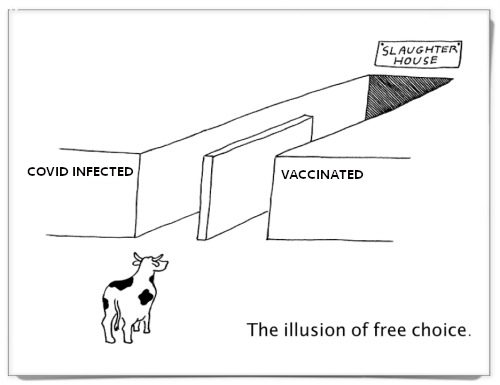 People are beginning to wake up:

Originally published on https://www.newcoldwar.org/health-emergency-or-seizure-of-power-thepolitical-economy-of-covid-19/ Thanks to Karel van Wolferen for key materials, and to Radhika Desai, Alan Freeman, Giorgio Romano Schutte and Henk Overbeek for comments on a previous version.

Note: Here is just the first part of this Article.  READ the entire article as PDF:  Health_Emergency_or_Seizure_of_Power

On 11 March 2020, the World Health Organization (WHO) officially declared the outbreak of Covid-19 (the respiratory illness caused by the SARS-CoV-2 corona virus) a global pandemic, the first since the H1N1 swine flu in 2009. Within a short time-span, a large part of the world went into lockdown, forcing people into their homes, outlawing jogging or meeting others, etc., all supposedly to ensure their protection. In this piece I challenge this assumption. As with previous events signalling that the era of political compromise in the West was drawing to a close and a politics of fear ushered in instead (first the 9/11 attacks in New York and Washington, then the new Cold War with Russia, dramatised by the downing of Flight MH17), the way the event is being exploited for other purposes is far more important than the forensics of the event itself. In this case as in the two previous ones, the Atlantic ruling class that presided over the post-war liberal world order, is seizing an opportunity (not necessarily of its own making) to try and stem its loss of control at home and abroad.

Soon after the epidemic began or, better: was proclaimed to be developing into one, draconic measures were taken completely out of proportion to the real threat to public health. Although apparently a world-wide phenomenon (e.g., India with 1,3 billion inhabitants, of whom some 7.2 million die of various cases each year, ordered a complete lockdown, although only around 10,000 people have been infected and 358 people have died of/with Covid-19 at the time of this writing), the epicentre of the response is the West, where the ruling classes have seized on the opportunity to try and radically reverse the trend towards ‘populism’ both in the streets and in the shape of maverick leaders like Trump. The vulnerability of contemporary capitalism and its combination of speculative money flows and the global spread of product chains, as well as the instability of the underlying social contract, is key here (Desai 2020). With the media and governments whipping up fear, Naomi Klein’s ‘disaster capitalism’ in this case too serves to advance a ruling class agenda against popular forces (Klein 2007).

In the words of the Belgian journalist, Senta Depuydt, It is undeniable that the coronavirus epidemic has come on the scene at a crucial moment, when people everywhere are in revolt against the power of international financial institutions and multinational pharmaceutical corporations, whose stranglehold on governments is no longer hidden. Many scandals have shaken confidence. The bankruptcy of an aberrant economic system is accelerating, and attempts to start a third world war are multiplying. While it is impossible to know how the “coronavirus pandemic” will influence the redistribution of power, it is certain that many are seeking to have Covid-19 serve the political interests of a global governance project (Depuydt 2020, emphasis added).

The ‘global governance project’ is just another term for the liberal world order pursued through two world wars and reinvigorated in the wake of the collapse of the USSR, the Soviet bloc and the defeat of states and movements relying on them.

That the new corona virus was recognised first in China in late 2019 only highlights that we are not looking at a grand plan hatched by the West, but at an opportunity seized upon to advance an agenda, of which some elements had been gestating, others were improvised later. Indeed the beginning epidemic in Wuhan and the surrounding Hubei province, to which the Chinese government responded with draconian measures that effectively stopped the spread but also all social activity, was not immediately replicated outside China. Britain and the United States were even among the last to go into lockdown. However, the world-wide standstill of normal life, which is having devastating consequences for hundreds of millions and opens up the prospect of a regimented society for many more, reveals how one after another, governments (not all) saw an opportunity to solve other issues by falling into line with ‘battling the pandemic’.

Framing health and other issues as questions of ‘security’ has been analysed as a way of bolstering state power in times of crisis (Elbe 2009: 15), and that is clearly at play in this case too. The security at stake is the stability of the existing order, a dangerously lopsided, oligarchic capitalism in terminal decline. In the current Covid-19 emergency, a specific factor is the attempt by the established Atlantic ruling class to oust Donald Trump, the first real outsider having won the presidency of the United States in modern times (De Graaff and Van Apeldoorn 2019).