Charles Selengut characterizes the phrase “religion and violence” as “jarring”, asserting that “religion is thought to be opposed to violence and a force for peace and reconciliation”. He acknowledges, however, that “the history and scriptures of the world’s religions tell stories of violence and war as they speak of peace and love.”

Hector Avalos argues that, because religions claim divine favor for themselves, over and against other groups, this sense of righteousness leads to violence because conflicting claims to superiority, based on unverifiable appeals to God, cannot be adjudicated objectively.

Nonetheless, believers have used similar arguments when responding to atheists in these discussions, pointing to the widespread imprisonment and mass murder of individuals under atheist states in the twentieth century:

And who can deny that Stalin and Mao, not to mention Pol Pot and a host of others, all committed atrocities in the name of a Communist ideology that was explicitly atheistic? Who can dispute that they did their bloody deeds by claiming to be establishing a ‘new man’ and a religion-free utopia? These were mass murders performed with atheism as a central part of their ideological inspiration, they were not mass murders done by people who simply happened to be atheist. —Dinesh D’Souza

In response to such a line of argument, however, author Sam Harris writes:

The problem with fascism and communism, however, is not that they are too critical of religion; the problem is that they are too much like religions. Such regimes are dogmatic to the core and generally give rise to personality cults that are indistinguishable from cults of religious hero worship. Auschwitz, the gulag and the killing fields were not examples of what happens when human beings reject religious dogma; they are examples of political, racial and nationalistic dogma run amok. There is no society in human history that ever suffered because its people became too reasonable. —Sam Harris

The Inquisition (Inquisitio Haereticae Pravitatis; Inquiry on Heretical Perversity) was a group of decentralized institutions within the judicial system of the Roman Catholic Church whose aim was to “fight against heretics”. It started in 12th-century France to combat the spread of heresy and error, and was later expanded to other European countries. 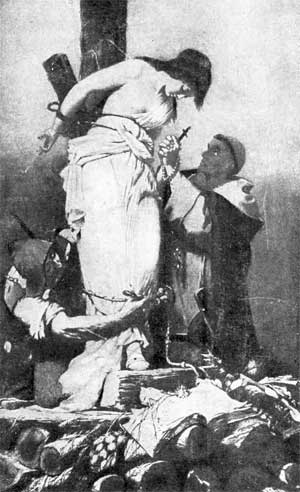 The Inquisition proved how Catholicism will react when it has possession of absolute power. Is it any wonder that in the 1880s, Dr. H. Grattan Guinness preached the following:

I see the great Apostasy, I see the desolation of Christendom, I see the smoking ruins, I see the reign of monsters; I see those vice-gods, that Gregory VII, that Innocent III, that Boniface Vlll, that Alexander Vl, that Gregory XIII, that Pius IX; I see their long succession, I hear their insufferable blasphemies, I see their abominable lives; I see them worshipped by blinded generations, bestowing hollow benedictions, bartering away worthless promises of heaven; I see their liveried slaves, their shaven priests, their celibate confessors; I see the infamous confessional, the ruined women, the murdered innocents; I hear the lying absolutions, the dying groans; I hear the cries of the victims; I hear the anathemas, the curses, the thunders of the interdicts; I see the racks, the dungeons, the stakes; I see that inhuman Inquisition, those fires of Smithfield, those butcheries of St. Bartholomew, that Spanish Armada, those unspeakable dragonnades, that endless train of wars, that dreadful multitude of massacres. I see it all, and in the name of the ruin it has brought in the Church and in the world, in the name of the truth it has denied, the temple it has defiled, the God it has blasphemed, the souls it has destroyed; in the name of the millions it has deluded, the millions it has slaughtered, the millions it has damned; with holy confessors, with noble reformers, with innumerable martyrs, with the saints of ages, I denounce it as the masterpiece of Satan, as the body and soul and essence of antichrist.”

Source: THE INQUISITION: A Study in Absolute Catholic Power

Spanish colonization of the Americas

Colonial expansion under the crown of Castile was initiated by the Spanish conquistadores and developed by the Monarchy of Spain through its administrators and missionaries. The motivations for colonial expansion were trade and the spread of the Christian faith through indigenous conversions. It lasted for over four hundred years, from 1492 to 1898.

Decoding The Past – Opus Dei Revealed

Opus Dei, formally known as The Prelature of the Holy Cross and Opus Dei (Latin: Praelatura Sanctae Crucis et Operis Dei), is an institution of the Roman Catholic Church that teaches that everyone is called to holiness and that ordinary life is a path to sanctity. The majority of its membership are lay people, with secular priests under the governance of a prelate (bishop) elected by specific members and appointed by the Pope. Opus Dei is Latin for Work of God; hence the organization is often referred to by members and supporters as the Work.

Criticism of Opus Dei has centered on allegations of secretiveness, controversial recruiting methods, strict rules governing members, elitism and misogyny (hatred or dislike of women or girls), and support of or participation in authoritarian or right-wing governments, especially the Francoist Government of Spain until 1978. The mortification of the flesh practiced by some of its members is also criticized. Within the Catholic Church, Opus Dei is also criticized for allegedly seeking independence and more influence.  [ — Source: Wikipedia]

“The Vatican is being exposed as the most criminal organization in existence and the mother of all abominations on Earth… The worldwide crimes that they have managed to commit against humanity for over 2000 years via its criminal priests, nuns, and evil religious leaders must be exposed…”  — Source >> 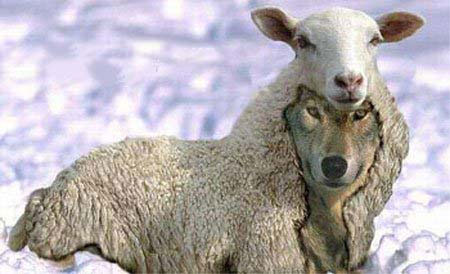 In 2008 and while several Argentine generals were being tried for their past crimes, Cecilia testified in court against her best friend, Silvina Parodi. Silvinia was a student during Argentina’s military dictatorship that ruled from 1976-83. She was an outspoken opponent of the regime and accused of being a troublemaker. The military junta arrested her and imprisoned her. Along with thousands of others, Silvinia became one of the Disappeared. After describing the daily and nightly humiliation and torture, Cecilia admitted she had been the one who gave them Silvinia’s name. “It was me. I took the executioners to the house where Silvina was. I saw them shove her out the door, hit her with their rifle butts, kick her. I heard her scream” cried Cecilia. Outside the courtroom, someone came over and asked her in a low voice, “After all that, how did you mange to go on living?” Cecilia answered in a voice even lower: “Who told you I’m alive?”

Power of the Church

Most people think that in monarchies the king/monarch was/is at the top of the power hierarchy, however a closer look shows that receive their power from the Church.
Does the Church have the ultimate power to give to a king/monarch? 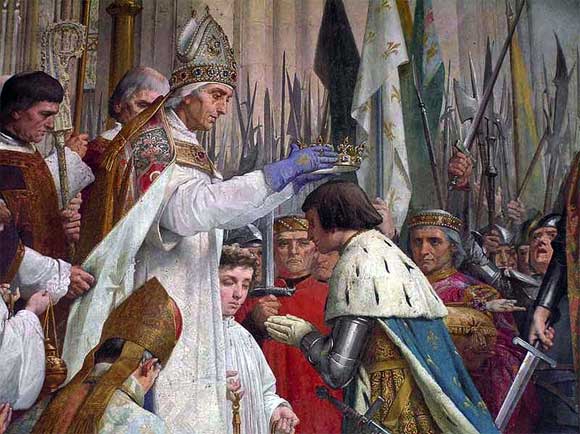 A coronation is a ceremony marking the formal investiture of a monarch and/or their consort with regal power, usually involving the placement of a crown upon their head and the presentation of other items of regalia. This rite may also include the taking of a special vow, acts of homage by the new ruler’s subjects, and/or the performance of other ritual deeds of special significance to a given nation. Once a vital ritual in many of the world’s monarchies, coronations have changed over time due to a variety of socio-political and religious factors to the point that most modern monarchies have dispensed with them altogether, preferring simpler enthronement, investiture, or benediction ceremonies. However, coronations are still held in the United Kingdom, Tonga and several Asian countries. In common usage, coronation often simply refers to the official investiture or enthronement of the monarch, whether any actual crown is bestowed or not.

In addition to investing the monarch with symbols of state, coronations often involve anointing with holy oil, or chrism as it is often called. Wherever a ruler is anointed in this way, as in Great Britain and Tonga, this ritual takes on an overtly religious significance, following examples found in the Bible. Some other lands use bathing or cleansing rites, the drinking of a sacred beverage, or other religious practices to achieve a comparable effect. Such acts symbolise the granting of divine favour to the monarch within the relevant spiritual-religious paradigm of the country.

In the past, concepts of royalty, coronation and deity were often inexorably linked. In some ancient cultures, rulers were considered to be divine or partially divine: the Egyptian Pharaoh was believed to be the son of Ra, the sun god, while in Japan, the Emperor was believed to be a descendant of Amaterasu, the sun goddess. Rome promulgated the practice of emperor worship; in Medieval Europe, monarchs claimed to have a divine right to rule. Coronations were once a direct visual expression of these alleged connections, but recent centuries have seen the lessening of such beliefs due to increasing secularization and democratization. Thus, coronations (or their religious elements, at least) have often been discarded altogether or altered to reflect the constitutional nature of the states in which they are held. However, some monarchies still choose to retain an overtly religious dimension to their accession rituals. Others have adopted simpler enthronement or inauguration ceremonies, or even no ceremony at all.

The following content is very controversial. Claims and testimonies presented here have not been “officially” confirmed and have not resulted in criminal charges…

For twenty-two years, “Sister Charlotte” (she never revealed her true name in public) was a member of a Roman Catholic convent of nuns. From a very young age, she thought that this would be the best way to redeem her family from the torments of “purgatory”. 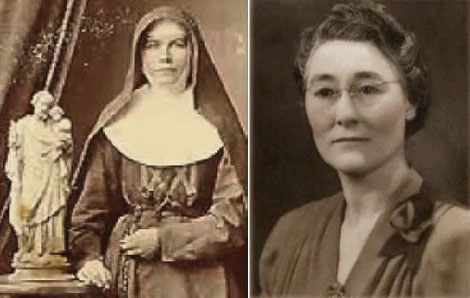 She graphically describes many of the terrible tortures and suffering she endured in the dungeons of her convent and how God mercifully rescued her from this life. Two years after publicly revealing her experiences, she disappeared. Listener’s discretion is advised.

As the only known survivor-intended-victim of a modern day human sacrificial ceremony, Jenny Hill is living proof that ritual abuse is, in fact, a reality. With great courage and in open defiance of her abusers, she wants her story told. The ending will shock you. Viewer’s discretion is strongly advised. 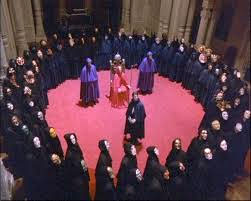 Kubrick got the filming rights for Dream Story in the 1960s, considering it a perfect novel to adapt on a film about sexual relations. The project was only revived in the 1990s, when the director hired writer Frederic Raphael to help him with the adaptation. The film was wholly shot in the United Kingdom, including a recreation of Greenwich Village at Pinewood Studios, and had a long production, which holds the Guinness World Record for the longest constant movie shoot, at 400 days.
Eyes Wide Shut was released on July 16, 1999, a few months after Kubrick’s death, to generally positive critical reaction and intakes of $162 million at the worldwide box office. Its strong sexual content also made it controversial. To ensure a theatrical R rating in the United States, its distributor Warner Bros. digitally altered several scenes during post-production. The uncut version has since been released on DVD.