ANYONE WHO HAS EVER LOVED A DOG KNOWS THE WARMTH OF THEIR COMPANIONSHIP, BUT DID YOU KNOW AN ACT OF SHEER VANITY IN THE 19TH CENTURY BROUGHT 40 MILLION YEARS OF THE GENETIC EVOLUTION OF DOGS TO AN END?

The early ancestors of Gray Wolves were a group of carnivores named thecreodonts, that roamed the northern hemisphere between 100 and 120 million years ago. About 55 million years ago, the creodonts gave rise to the carnassials, a group of wolf-like animals that had specialised jaws for eating meat. One member of this family, Miacis, is thought to be the common ancestor of ALL present-day wolves, dogs, bears, raccoons and weasels. 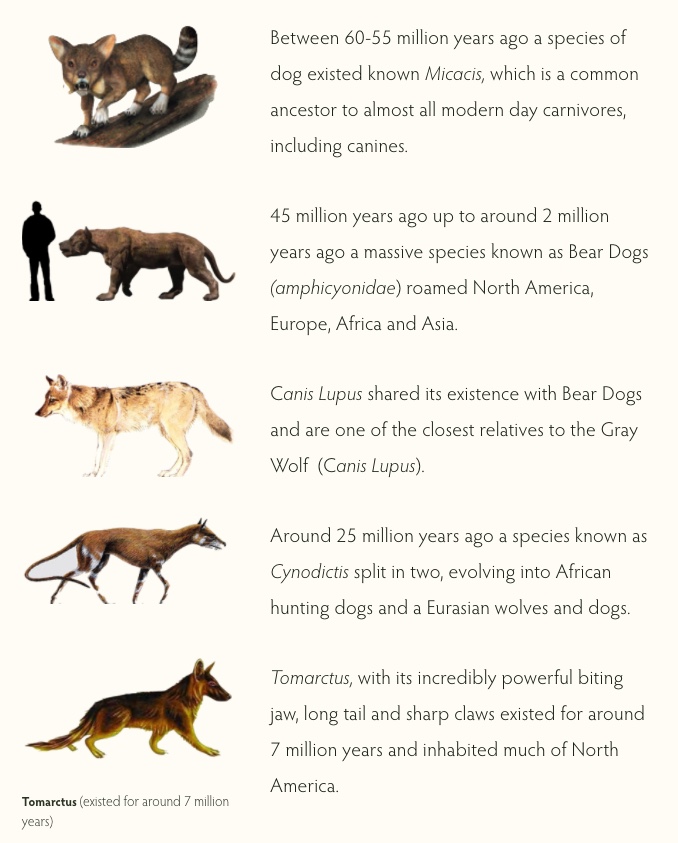 It is unknown exactly when domestic dogs (Canis familiaris) evolved from the Gray Wolf (Canis lupus) but recent studies of dog mitochondrial DNA suggest they evolved alongside each over 100,000 years ago. Until 2009, most experts believed domestication occurred about 14,000 years ago but that idea was tipped on its head with the discovery of several dog skulls which had been ritually buried in a cave in the Czech Republic – dated to 30’000 BC. 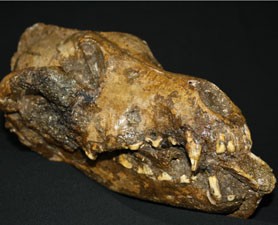 The fossilized dog skull clutches the mammoth bone, seen sticking out of the front of the mouth.

In 2011 a paleolithic dog skeleton dated to 40’000 years ago was unearthed with a large mammoth bone in its mouth, suggesting that not only did prehistoric dogs haul mammoth tusks and meat on sleds for humans, but that they also consumed mammoths.

The dog with the mammoth bone in its mouth had its brain carefully removed after death suggesting ritual significance possibly relating to the perceived process of releasing the animals spirit. 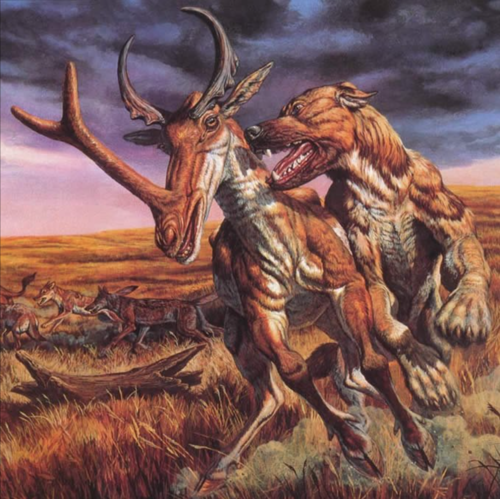 Bear Dogs existed from around 44 mya until about 2 million years ago.

Another dog skull dated to 33,000 years ago was recovered with a human body at Razboinichya Cave in Siberia telling us that man had domesticated hunting dogs by this time and that they had an important role within religious/spiritual beliefs.

Modern theories suggest wolves first became attracted to human settlements because of discarded food scraps and the species started becoming better scavengers than hunters. Tamer wolves that had learned to scavenge human campsites thrived, while the strongest predator wolves would be left behind, a theory which backs up Darwin’s Theory of natural selection.

At this time, not having the same teeth,  jaws or the speed as dogs, humans were isolated and vulnerable and took advantage of these newly found wolves who helped protect small hunting stations and settlements. Dogs were an excellent early warning alarm system, and in famine they became a source of food.

Over time the union of man and dog led to the most effective hunter-killer team on Earth and in return, dogs got companionship, protection, shelter and a reliable food source. 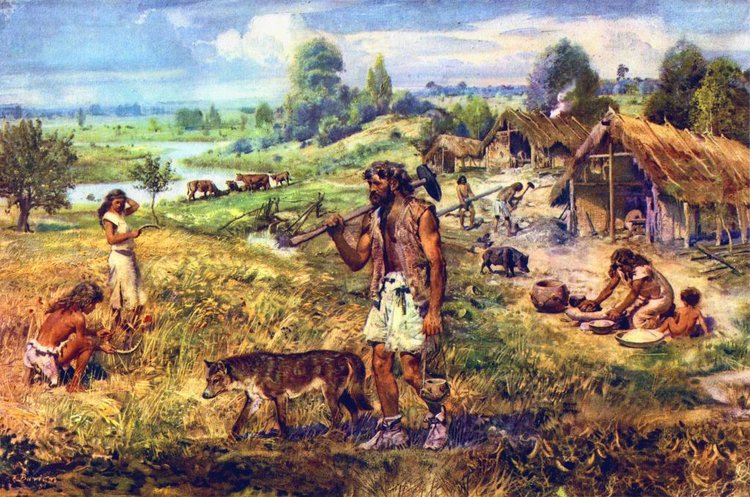 Dogs became essential farmers tools in the Neolithic era where they not only guarded fields and animal stocks from predators, but they doubled as effective weapons in tribal warfare.

THE RELATIONSHIP BETWEEN HUMANS AND DOGS WAS CEMENTED AROUND 8000 B.C.E AT THE DAWN OF FARMING, WHEN MAN REALISED THE DOMESTIC DOGS LOVE OF STARCH.

With farming, we began training dogs into effective farming tools and weapons used in inter-tribal fighting and these inherent skills are still evident today in dog breeds with particular skill sets, for example;  guard-dogs, police-dogs, military-dogs, sheep-dogs and rat-catchers. Gray Wolves don’t absorb starch like domestic dogs, suggesting it was at this time domestic dogs split from Grey Wolves, however it is argued that dogs had already been domesticated and simply adapted to the new human food sources. 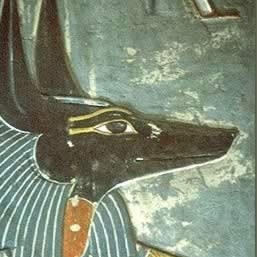 Anubis was an ancient Egyptian jackal headed god of the underworld.

Over time dogs became ritualised and were associated with gods and the afterlife. They were worshiped in ancient China, Egypt and South America where they were carved into statues and temples, and also appear in myths and legends.

Tangible proof of the ritualisation of dogs is found in the skeleton of a male husky-like dog that lived 7,000 years ago in Siberia. It worked alongside humans throughout his lifetime, ate human food and was ritually buried as though it were a human. A wild wolf was  ritualistically buried nearby perhaps serving as a protector or guardian to humans on their journey through the afterlife.

In the Iron Age, ancient Romans, Egyptians, Greeks and Britons increasingly used dogs in warfare, bloodsports and violent forms of entertainment. Large breeds such as the mastiff and wolf hound proved highly effective in war due to their great size and strength.

THE ANCIENT ROMAN HISTORIAN STRABO REPORTED IN 38 AD OF “LARGE BRITISH DOGS, WHICH WERE BRED IN THEIR HOMELAND OF BRITANNIA TO HUNT DANGEROUS GAME AND AS WAR DOGS.” 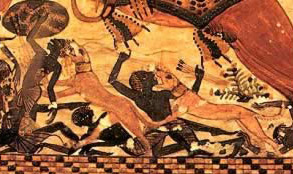 In 43 AD, at the Roman conquest of Britain there were giant, wide-mouthed dogs, which the Romans called Pugnaces Britanniaethat “surpassed the Roman Molossus dogs”.

Records tell of a Procurator Cynegii who was stationed in Venta Belgarum (Winchester) in England, where he was responsible for selecting dogs for export to Rome where they would compete in contests in the amphitheatre and be integrated into the ancient Roman army, as war dogs.

DOGS WERE ESSENTIAL TOOLS DURING THE INDUSTRIAL REVOLUTION WHERE THEY WERE USED IN WARS, SHIPS, FACTORIES AND MINES AND STARTED BECOMING POPULAR PETS.

In the 19th century, having learned how parent dog genes affect the genes of the offspring, selectively breeding dogs became very popular. Although dogs were still bred for hunting and guarding purposes, we began pairing dogs for aesthetic qualities alone. This gross act of vanity completely destroyed the natural genetics of dogs and stopped 44 million years of natural selection.

It was no longer the strongest dogs who survived and mated with equally strong mates, but dogs were being forced to mate with partners who had desirable physical traits, with little to no consideration for the puppies genetic strength. Our need to stand out in crowds and to be different/better than our neighbours has resulted in the Fédération Cynologique Internationale recognising over 340 breeds of dog today.

THE IDEA SHARED AMONG MODERN DOG BREEDERS OF A “PURE BREED” IS A DELUSION. EVEN THE PUREST BRED DOG IS STILL 99.99% MUTT.

Claiming any dog is “pure bred” is similar to claiming that girls with blonde hair and blue eyes, and attached hands, are ‘their own’ special breed. In reality, that girl is 99.99% identical to every other human, even one with black hair, brown eyes and unattached arms.

By the late 19th century the inbreeding of dogs with similar genes began causing problems in many species. The lack of genetic diversity created weaknesses in species such asbulldogs who have problems breathing and in German Shepherds which often lose nerve function in their hind legs in later life.

Another side effect of mass breeding is the wide variety of phenotypes. Dogs vary greatly in size and colour while wolves don’t vary nearly as much. This occurred because humans stopped the natural selection process for domestic dogs by supporting weaker, tame scavengers, who then bred offspring, widening the gene pool. Swedish researher, Carles Vilà perfectly summarised this theory perfectly, saying:

“It is therefore possible that this process led to an increase in functional genetic diversity throughout the entire dog genome, including both genes and elements affecting gene expression.”

A puma and a jaguar are the same genus, but different species, and cannot mate. Yet a grey hound and a shiatsu with vast physical differences can breed, demonstrating the vast diversity in canis familiaris. Mankind would have caused the same genetic changes to cats, if they had offered an industrial application other than being great rat-catchers.

Today, we train astronaut dogs in space programs and teach search and rescue dogs to leap from helecopters and speedboats. Medical dogs can detect cancer and smell when a diabetic patient is hypoglycaemic (suffering low blood sugars). Military dogs detect explosives, locate bodies an clear areas deemed too dangerous for soldiers. In July 1942, during WW2, the American Army began procuring and training military working dogs, leading to the ‘War Dog training program in 1943 which parachuted puppies into war-zones to sniff out enemy tunnels and bunkers. Nazis troops reportedly fled in fear of being licked to death. 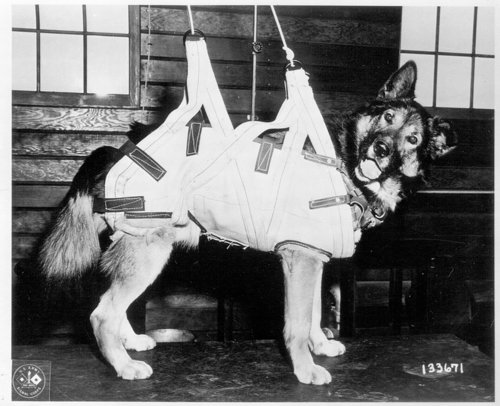 What on earth will dogs be doing in the future? In the modern police and army, dogs which are trained to bite often get broken teeth, which are now being replaced with sharp titanium fangs at a cost between $600-$2,000/tooth.  I imagine we will soon have Dr Who like robotic canines capable of syncing with your computer and smartphone!

In conclusion, the evolution of dogs, that spans millions of years, is far from complete, and albeit we have altered its course irreversibly with mass breeding over the last 200 years, so far, no other animal has evolved to live alongside humans as harmoniously as dogs have.