Hemp for Independence  In Food & Health, In Shelter & Security and In Energy & Productivity 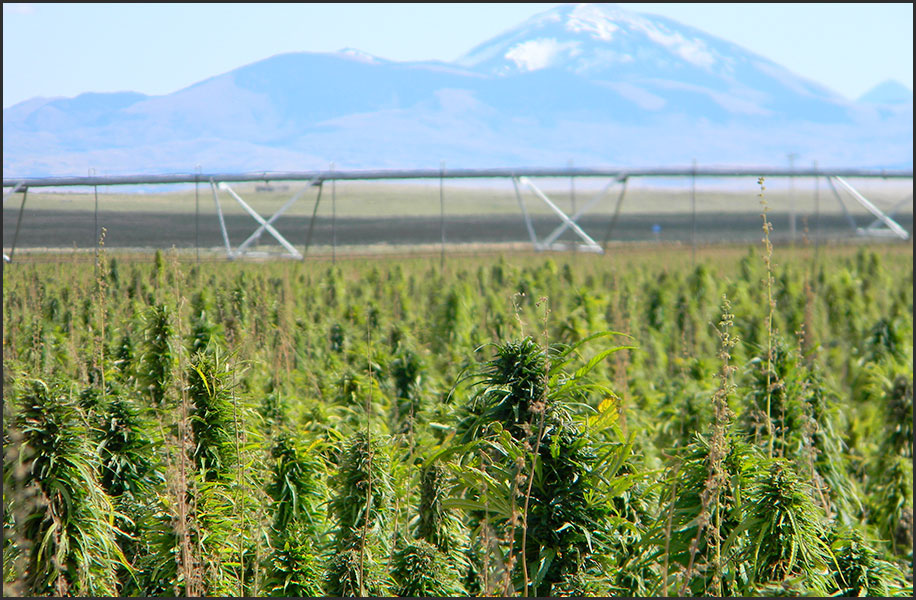 Independence Then and Now

Then: My great grandfather and grandmother on my mother’s side, Frank and Lovisa Coffin came to what is now Alberta, Canada following a small herd of grazing cows.  They lived on the bank of the Milk River, Northwest of the Sweetgrass Hills, on grass land that no one else wanted, before there was a town or road or railroad in that dry part of the Canadian Prairies.

It is surprising how little seems to have changed there in about 140 years.  Yesterday we were still able to find a narrow horse path between rows of Indestructible Caragana bushes, ending near a sunken area in the side of the river valley that was almost certainly the Coffin family’s first sod house, near a scattering of decayed boards, the remnants of the small house which they were eventually able to build there with lumber hauled by wagon hundreds of miles from Central Montana.

Above: Pictures of narrow Carigana lane leading to remains of Frank and Lovisa Coffin home on the Milk River.

The only reason to make a very narrow lane of carigana shrubs, not wide enough for a horse to turn around in or to pass another horse in, leading from the wagon trail by the river crossing, for 1/4 mile up hill, directly  to the house window, was so Lovisa or the children could drop hostile visitors dead, one at a time, before they could get side by side, to be effective….
If Lovisa shot the first one and then Edna shot the last one, then the others would all be trapped between and none could even turn and run. With stiff cowboy legs and boots and spurs, they would all be dead in a hurry.  In those days real Mormons didn’t accept government jobs.

They lived on REAL PROTEIN foods…meat and fish and milk with berries and wild plants and a few garden vegetables as novelties. They had to continuously prepare to protect themselves and their animals from long, forty below zero winters, from one hundred kilometre per hour winds, from seasons with no rain ….and very little water in the river from the nearby mountains.  They branded their calves every year.  They were rich in food and necessities, but they had virtually no income for many years.  They raised their babies to be independent, hardworking, adventurous and successful, like themselves. Many years later, when the first railroad entered what is now Alberta from the East, they collected most of their cattle, sold them to cattle buyers and shipped them to Ontario.  After that they were locally wealthy and could buy other land more suitable for farming.  They were also able to loan money to children and others to buy farm land. All of this was only possible because cattle…grazing on free land…provided them with everything they needed for food & health, shelter & security as well as energy & productivity. The children of Frank and Lovisa Coffin were able to develop large farms and live in concrete houses with running water supplied by wind mills. 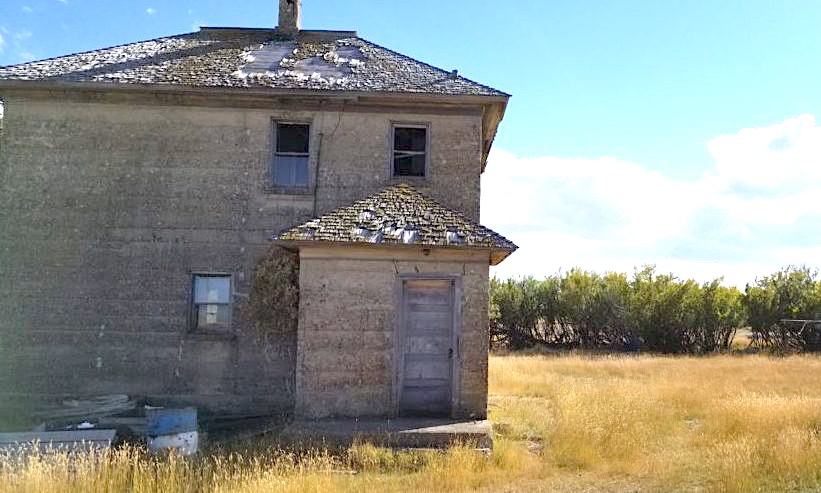 Picture of an old cement house, later residence of descendants of Frank and Lovisa Coffin.

NOW: It is not now possible in most parts of the World to use cattle…. grazing on free land…to become independent and wealthy in food and necessities.

Indeed, all of the land that was used by Frank and Lovisa Coffin to start their large family… indirectly producing many generations and many hundreds of independent, self-sufficient, individuals …. is now owned by a government that has been manipulated by elites to ensure that millions of acres of our most desirable land is now protected behind “no trespassing signs”.  Governments controlled by convergences of elites are determined to crush independent humans and replace them with consumers… debt slaves, trained to do single tasks.

Instead of using our human ingenuity to survive the crushing effects of Nature, we must now use our energy and ingenuity to survive the crushing effects of governments controlled by convergences of elites, manipulating us with false narratives. After birth I was brought to a tiny two room house that my father had purchased for twenty dollars and then placed on the ground near the Milk River about ten miles West of the location where my great grandparents Frank and Lovisa Coffin had started their family about 60 years previously. Wheat was then the only valuable grain crop suited to this dry, short season, high altitude, part of the prairies, but the Canadian Government stole our wheat from us every year for over 60 years.  The Canadian Government forced us to sell to them even though we could always have obtained much more for it from US buyers. Farmers who tried to sell their own wheat to US buyers were grabbed from their houses in front of their families, put in leg irons to make an example of them, and then jailed until they crumbled. When I was three years old my father and uncles managed to smuggle a short season variety of barley into Canada, which we soon increased and began to market as planting seed to our neighbours.   As soon as the Canadian Government learned that we were going to have a crop that would replace the wheat which they were stealing from us, they included barley as a wheat board commodity, thereby making it illegal for us to sell planting seed to neighbours or to sell our production to anyone other than the Canadian Government. The Canadian Government stole our barley business. As soon as I could walk I was involved in the production of eggs and chickens and turkeys and milk and cream, as were all other farm children.  In those days poultry and milk cows were scavengers that ate plants and bugs that humans could not eat and then converted these plants and bugs into valuable proteins.  We thrived on these virtually free proteins and paid our expenses with the income we obtained from the surplus production that we sold inexpensively in town. By the time I was eight, the Canadian Government had begun regulating us out of these businesses.  First, we were threatened with jail if we continued to sell our young male birds as fryers. Then we were threatened with jail if we sold milk or cream to the public.  Eventually we were threatened with jail if we sold eggs to the public.  Government agents used to go to the local grocery stores to obtain lists of store customers who did not purchase government approved milk, cream, eggs and poultry.  Government agents would then question townspeople to discover where they were obtaining their protein foods, so they would have evidence when they came to our farms to threaten us. We tried beekeeping.  We hired a mill to saw up the many tens of thousands of wooden pieces needed to make the 10,800 frames and 1200 boxes required for 200 bee hives.  We then spent hundreds of hours, every available moment day and night, making the complete hives.  Before Spring, my father drove a big truck, filled with bags of clover seeds, up and back for many miles on the frozen Milk River, careful to drive on the frozen river bed or in places where the ice was thick.  My friends and I rode in the back of the big truck, throwing clover seeds onto the river banks.  In early Spring our bees had an immense crop of clover to convert to honey and protein (pollen).  We sold our products honey in all the local stores and it seemed like this would be a great agricultural business. But after two years, laws were changed so that we were required to sell our honey without significant profit to a processor for pasteurization and packaging. Once again, farmers would not be allowed to market directly to the public. It would not make sense to continue unless we borrowed immense amounts of money to purchase immense numbers of bee hives and the equipment required to extract and pasteurize the honey. My father did not want to become a debt slave to the convergences of elites that design and profit from agricultural programs…so we quit honey production.. After farm children quit producing our inexpensive proteins, townspeople especially, began to eat more sugars and starches.  Obesity and type II diabetes began to appear, first in larger families that did not have sufficient funds to buy protein foods from government approved sources.  This trend continues to the extent that virtually everyone will soon expect to be debilitated with diabetes and hardened arteries, medicated for high blood pressure….. long before they are old. In 1998 we began a new agricultural project and we soon developed the Hemp Hearts products and programs that make it easy to reverse the disastrous effects of government involvement in food & health. We learned the truth in the statement of Hippocrates: “Let thy food be thy medicine; Let thy medicine be thy food.” Those who learn to use our hemp foods and programs certainly do not need any government health care. They become noticeably independent relative to food & health.   Now it is time to develop the hemp products and hemp programs that will also make us independent relative to shelter & security as well as energy & productivity.   We live in a country that is over 90 percent undeveloped land, but convergences of elites use regulation to force many of us to pay about one million dollars in total labour value for a place to live.  We live in a country with infinite potential in terms of agriculture, energy, forestry, mining etc., but we are so controlled by convergences of elites that half of us survive on government cheques and the other half works for foreign multinationals. It is time for change.

Virtually anyone can now learn how to use our food products to increase energy, to experience perfect digestive health, to control or reduce weight, to reverse diabetes and cardiovascular disease and to improve all body tissue health. Those who are interested in the potential of hemp farming relative to food & health, shelter & security as well as energy & productivity should begin by experimenting on themselves with our food products ….so they will better understand the potential of their hemp project…so they will have the health and energy necessary for the success of their hemp project.  Email roger@hemphearts.com  Copyright 2018 by Roger Snow