Why Not Have a One-World Government?

Why not have a New World Order?  The Old World Order hasn’t worked too well.  What could possibly be wrong with CHANGE?

Imagine a new system, not like Communism or any negative aspects of Socialism.  John Lennon sang, ‘Imagine there’s no countries.  It isn’t hard to do.  Nothing to kill or die for…’

This writer often uses Nikola Tesla’s quotes AGAINST NATIONALISM; AGAINST PATRIOTISM.  In ‘Star Trek,’ the projected Earth of the future was united into one planet; one Federation.

Albert Einstein was a One-Worlder.  During World War 2, he participated in marches carrying banners which read: ‘One World or None.’

The great-thinker Buckminster Fuller, creator of the geodesic DOME, believed in a UNITED future with no countries.  He described that we are all aboard ‘Spaceship Earth.’

Science-fiction is probably correct:  Real world aliens and ET humans, for the most part, are One-Worlders.

The Illuminati or New World Order has its old symbol for a planetary UNION or a UNITED Federation.  The Roman ‘fasces’ (look in dictionary), a FASCIST symbol, is still used by the United States; in the House of Representatives; on the seal of the Senate; was on the reverse of the Mercury Dime and even on the Lincoln Memorial, etc.

But…this is not the wonderful world dreamed by forward-thinkers like Tesla, Einstein and Fuller.  Our ‘fascist’ symbol, also worn by Hitler’s men, represents a dark/secret totalitarian STATE.  The (evil) symbol means, ‘if we UNITE the sovereign bosses (tied rods), then we have (ax head) POWER!’

What’s so wrong with having a New World Order and a One-World Government?  The problem is…who’s in charge?  Certainly, the answer cannot be anyone or anything from the previous regime.  ‘Modern’ living has consisted of centuries of secret subjugation and enslavement by our Ruling Masters.  They have passed-the-torch to new overlords.  Us guys, (considered) cattle/sheeple, even PAY the NWO for their ruthless dominion over us!

No…it is the Meek Shall Inherit the Earth that I am talking about…not the military complex.  This writer is calling out for ‘Wings Over the World’ (see ‘Things to Come’).  Scientists; environmentalists; the most intelligent and caring of humans SHOULD be in charge…and not Zion Capitalists.

Our long history has been a journey of sheep led to slaughter through needless wars.  Wars are simply a means of controlling the masses by those who would sell us the bullets and bandages.

If there is a movement toward a One-World Government with a One-World Bank and a One-World Police Force…we have to be very, very careful.  If we abolish countries, what will replace them?

WE have to be in power; the masses; the 99%.  There must be an end to all tyrants.  We have to become One Planet ruled by intelligent, compassionate Free People. 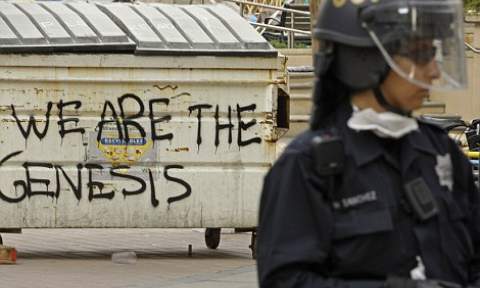 Final thoughts:  Sorry for the references to films.  Often, in films, we view the magic and hope of dreams.  Remember at the end of the film Avatar?  Humans who lived-by-the-sword and raped lands that did not belong to them…were defeated.  They lost and were marched off that world at gunpoint.  If only a higher power came to our aid…

Please understand; I am not criticizing ‘America.’  America is beautiful people and beautiful nature.  I am criticizing the bureaucracy ruled by cold, bureaucratic profiteers called the ‘United States’ and also its parent-company; the ‘United Kingdom.’