Will a terrible disaster occur or the answer to our prayers?  Will it be a cursed catastrophe or an unexpected blessing?

Some time ago, the W-M webmaster asked me to write an article on what I thought might happen near the end of the year.  My response was, ‘I don’t know what will happen.’  I still do not know, but I could have a clue and a hope.

Before I attempt to elaborate, I want to present my source; an inspiration.  Readers/viewers…take your time and see as much of William Cooper’s lectures as you can.  Truth seekers out there can appreciate the vast knowledge within this man.  (His speech; appearance and information parallel Jordan Maxwell).

I do not agree with 100% of Bill Cooper’s ideas and info (or Jordan’s), but the following is absolutely true:

THEY; secret, powerful men have plotted and executed plans for decades to move us into a New World Order and One-World Government.

I worry about later this year.  I’ve said for awhile now, ‘the Illuminati Rulers of the World will manufacture a disaster on this special date to show that it was an inevitable fate.’  DON’T FALL FOR IT, people.

From Wikipedia:  ‘Milton William Cooper (May 6, 1943 –  Nov. 5, 2001) was an American conspiracy theorist, radio broadcaster and author best known for his 1991 book, Behold a Pale Horse, in which he claimed global conspiracies, some involving aliens…’

Bill Cooper was more than that.  He did his best to tell the truth and expose others who did not.  He revealed secret bases on the Moon and Mars; a lunar atmosphere; a different Venus; credible UFOs; the truth behind Roswell; aliens working with governments and so much other information through his federal contacts.

Ironic that after Cooper relentlessly revealed the existence of ALIENS and government cover-ups for years, he then questioned the data he received.  He wondered if ALL the various types of aliens; supposed abductions; Roswell; official documents; EVERYTHING…was it faked?  Could UFOs, the existence of aliens have been faked for a dark purpose or evil agenda by the NWO?  The advanced technology and incredible saucer crafts were not in question.

Do I have to list how many recent films involve us fighting aliens or these monsters from space attacking us?  People; this is not simply using innovative C.G.I. techniques in cinematography.  This is PROGRAMMING.  Are they preparing us for a real alien attack?  In truth, a theorized December attack would NOT be an actual invasion…but, a concocted one by our secret Masters.

You know, I’ve always wanted to have aliens come down to Earth and make contact in my lifetime.  NOT EAT US FOR DINNER or wipe us out.  No, the dream of sci-fi fans across the planet:  ‘We know you’re out there; we’re in big trouble; we need rescue from the next artificially-produced tragedy.’  Maybe those are just my prayers…although, I’m not alone.

What if the bastards behind the curtains fly one or two of their disk-crafts out of Area 51 and attack England?  (I write England because of a special Illuminati Card where Big Ben is going down!)  Centre-of-the-world Britain would have the sympathy of the entire planet.  The controlled MEDIA would assist in spreading fear and panic by unfortunately having to report the destruction. 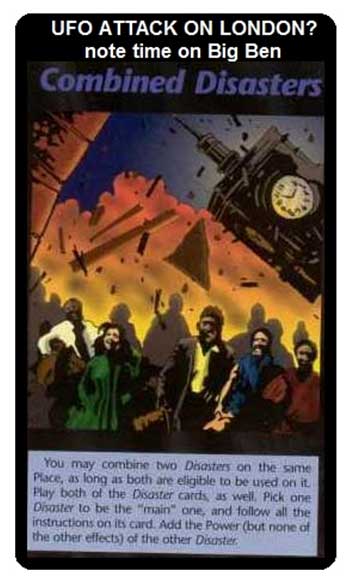 How easy it would be to fake an invasion!    Didn’t Ronald Reagan bring up the same scenario in his speeches…six times?

WHY?  Why would they do it?  Why unite people against an alien threat?  For those of you paying attention, it is to bring about a (evil) One-World Government and force us into this plot of a New World Order they have worked on for centuries (going back to Templars).

It is interesting that Hitler spoke of a New World Order and so did old man Bush along with other presidents.

That’s my take on the end-of-the-year, Mayan Prediction…a faked alien attack on London by these ‘Architects of Fear.’  Their purpose is for us to relinquish our sovereignty and willingly give up our rights and freedoms.  The result will be even more of a Police State, exactly as planned.

An alien enemy would unite the people of Earth, but we could be walking into a trap in the aftermath.  Mandatory barcodes and implants so our movements are tracked; cashless society; more monitoring and the loss of everything good and decent could be in our near future.

My prayers (hopes) are that somewhere in the universe beat compassionate hearts that will break whatever Prime Directive is stopping them and simply help us.  People would, of course, not believe (because of programming) these Venusians or whoever may finally present themselves.  Imagine TWO alien groups arriving in December; one, a beautiful race of loving extraterrestrial beings (no one will buy) and two, fabricated alien enemies your tax dollars support.

WHAT THEN?  Hey, before a barrage of comments misunderstands me; I am no doom-monger…just want to know what’s going on.  I want peace.  We don’t have a long wait; only a few months away, folks… 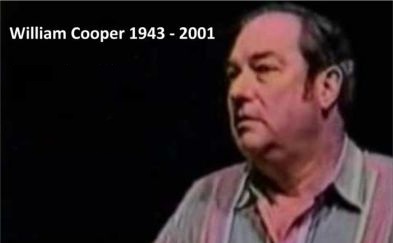 We are posting these reports more or less as we have received them.  We are deeply saddened at the loss of Bill Cooper.  We have had communications with him and members of our group have chatted with him over the years as well.  We didn’t always see eye to eye, and we often felt that Bill was not as aware as he might be about how his own mind could be manipulated.  But whatever the reason, whether he was manipulated to do something that got him killed, or whether everyone involved in this situation was being manipulated or not, we don’t know. Nevertheless, it is a sad end for Bill.  We are very sorry for his family.
Sheriff’s Deputy Shot; Original:  The notice on this story says: (Copyright 2001 Associated Press.  All rights reserved.  This material may not be published, broadcast, rewritten or redistributed) so we aren’t reproducing it here.  It may, of course, disappear.  The gist of it is: A sheriff’s deputy in Arizona was shot while trying to arrest William Milton Cooper.  The deputy was hospitalized in critical condition, but Bill Cooper was not.  He was dead.  This occurred around midnight last night.  The reason they were trying to arrest Cooper was, as far as I can tell, because he “had a handgun.”

YOU DECIDE WHAT THE TRUTH IS.

Behold a Pale Horse (1991) — by William Cooper. The author, former U.S. Naval Intelligence Briefing Team Member, reveals information kept secret by US government since the 1940s. UFOs, the J.F.K.. assassination, the Secret Government, the war on drugs and more by the world’s leading expert on UFOs. His top secret intelligence document discoveries provide proof positive the Illuminati intends mass destruction of half the world’s population, reaching its diabolical goal in what the author terms ‘the age of deception.   William Cooper was killed in a suspicious 2001 police shootout in his Arizona home.