Stanley Kubrick’s Murder and the truth of the Moon Landings!

People regard Stanley Kubrick as a ‘genius’ filmmaker and one of the greatest visionaries of the 20th Century.  We are not aware of how much of a real Genius this man truly was and how tortured a soul he was.  The public is largely unaware that Stanley filmed the Moon landings; was given ‘Keys to the Kingdom’ and was murdered for trying to tell us the truth in later films. 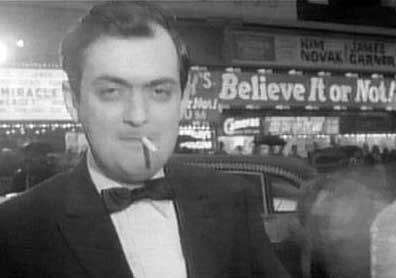 Thank you, Jay Weidner, for your 15-year investigations into the strange death of Stanley Kubrick and theories on the answer to WHY…  Thank you also for your detailed peek into Stanley’s films with clear eyes or Eyes Wide Open.  For years, audiences did not know what we were seeing in Kubrick’s films.  Now, we do as veils of ignorance are pulled away.

Certainly for many of you, these revelations will be brand new.  A huge question that is always asked concerns, ‘were the Moon missions faked?’  Most believe we went to the Moon and it is only ‘conspiracy nuts’ that hang onto the notion Apollo was faked.  Some believe that the U.S. never went to the Moon and point to honest to goodness evidence that supports the idea.

Weidner suggests a ‘third alternative’ where the U.S. truly went to our only satellite, but what we viewed back on Earth was completely staged.  The show was for our benefit only.  Governments could never tell the general public what was really found on the Moon.  There were ancient ruins and the surface was crawling with extraterrestrials!

Well, class…we’re going to see two films today and discuss them.  The first short really opened this writer’s eyes.  Long ago, before YouTube, I believed, ‘oh, this is one Conspiracy (we never went) that ‘They’ want out there…because it was so absurdly not true.’

Over time, after giving the skeptics a chance, one realizes more and more evidence-to-proof that the lunar missions (we saw) were 100% phony.  See this amazing link where Kissinger and other prominent political faces freely admit to the Grand Deception pulled over the eyes of the world:

Immediately, the thought strikes you, ‘yes, ‘2001’ with all those lunar sets was filmed in 1968 and directly after was the Moon landing in 1969.’  Remember, these same world leaders made people think a ‘lone gunman’ took out JFK…when the guilty parties were the very same world leaders (many conspirators were members of the investigating Warren Commission).

The ‘They’ or Illuminati New World Order are confident they can pull ANYTHING off.  The exact same mind-set executed the demolition of the NY Twin Towers in 2001, while we were told it was a terrorist attack.  The point is…those that control the media and everything else…can get away with anything and most everybody will believe the lies.  But, in time…the truth, eventually, becomes known.

As Hoagland tells us, in our psyche, ‘2001’ was supposed to resonate about the FILM and transcendence to a higher (Saturnian) realm…but it has been forever changed into 9/11!  We will not remember the future and ascension to higher consciousness.  Instead, ‘2001’ will mean a stab to our psyche; a (false flag) terrorist attack; and war; and hate; and revenge; and a giant leap backwards, etc.  ‘2001’ will stand for all the wrong things it was never supposed to symbolize because of our secret masters that control you and everything else.

We hear Donald Rumsfeld speaking about the Deception and that Kubrick was the right man for the job.  This was supported by General Walters, former head of the CIA.  The Illuminati or real, political puppet-masters had something on Stanley Kubrick.  Was he obliged to help the feds because they allowed him access to the Pentagon during the filming of Dr. Strangelove?  Could they have had private films of Kubrick in compromising positions?  Whatever the reasons, Stanley took a bite of Satan’s Apple or you could say The Industry’s promises of backing any future film Kubrick wanted to make.

We hear Mrs. Kubrick speak of how they created pinholes to the black in order to film stars.  I immediately thought of scenes in Star Trek Next Generation.  When they showed movements of star fields out of windows, the process was done with holes in black sheets.  Sorry to break trekker’s hearts, Gene Roddenberry was a 33 degree Freemason.  That fact explains various Masonic inclusions, which a bit of YouTube study can inform those interested.

‘Dark Side of the Moon’ link above will educate you of real shockers not made for public consumption.  People have died because of these dirty dealings with the ‘Devil.’  When the ‘dummy’ actors or soldiers are viewed, a requirement was expressed:  Each connected to the Project had to have no family connections and sign nondisclosure forms.  This was so they could be conveniently silenced later for what they witnessed and were a part of.

The most convincing snippet of film is during supposedly Armstrong’s stepping off the LEM in that famous moment of first touching the Moon.  LOOK WHAT HAPPENS…A BACKGROUND LIGHTING FIXTURE FALLS WITH A FLASH EXPLOSION OF THE LIGHTS…oops!  Look closely; this was not photo-shopped.  The accident happened and was caught on film.  The (not Armstrong) stand-in actor says, ‘I guess you want to do it again?’  One more joke on not only the American people but nearly everyone on the whole planet.

Here is the most convincing documentary that will captivate all viewers and especially film fans of Mr. Stanley Kubrick; a short movie only found on Vimeo.  The film called ‘Kubrick’s Odyssey’ is brought to you by Jay Weidner.  You will go through Stanley’s films and discover what they were really about…some contained mandatory changes.  You will discover the truth to what ‘The Shining’ was actually telling us and why Kubrick’s version was different than King’s version.

Note: By strange coincidence (?) this video (below) was removed the next day we posted this article:
“Vimeo has removed or disabled access to the following material as a result of a third-party notification by Gaiam claiming that this material is infringing: Kubrick’s Odyssey (part one).” 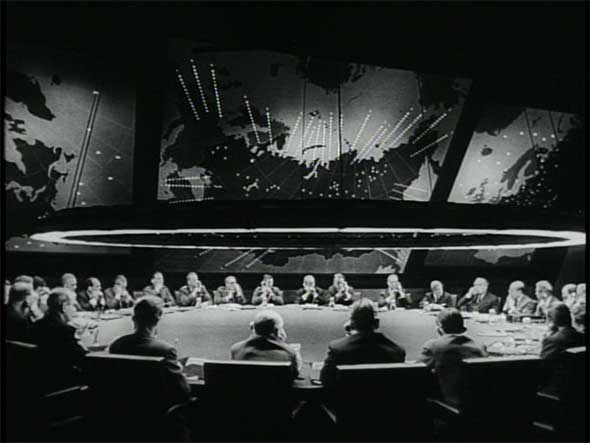 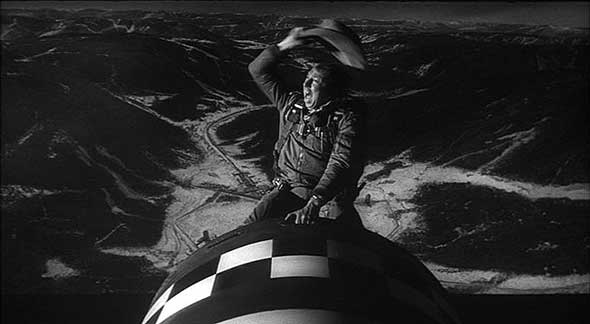 (Stanley made films) ‘…that would alter the way we look at ourselves, our history and our destiny…he used the medium to reveal the darkest and lightest of the human condition…’    — Jay Weidner

It is very interesting that from the beginning to the end of filming ‘2001’ perfectly parallels the development of the Apollo Space Program.  Weidner explains (and proves with enhanced, opening primate-scenes) exactly how the effect was done in times before blue-screens and computers.  ‘Front-Screen Projection’ was the method of having real foregrounds but projected images on wide screens for distant shots that appeared expansive.  Scenes had to be ‘stitched’ together and we can view the lines.  Clearly, Kubrick’s cinematographic fingerprints can be seen in nearly every Apollo image.

In radio interviews and film clips, Weidner corrects Richard Hoagland.  Hoagland lectures of visual discrepancies in the black, starless, lunar skies.  He sees them as evidence of ‘structuring’ and constructions on the Moon.  (There ARE ‘cathedral-like’ structures on the Moon, towers, etc. but I tend to agree with Jay).  Weidner shows us ‘blacked-out’ lunar skies to be real scaffolding and breaks in seams of the F.S.P. screen employed by Stanley.

Stanley Kubrick died four days after showing top executives at Warner Brothers his final cut of ‘Eyes Wide Shut.’  We have reports of SK nervously smoking cigarettes and worried that he might be killed for what EWS exposed.  He refused to edit his film to please The Industry.  The title of ‘Eyes Wide Shut’ is an Illuminati term (as Jordan Maxwell will tell you) that means how most people go through life; blind to what is directly in front of them in plain sight. 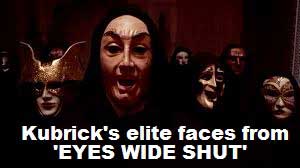 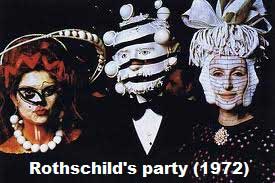 We should remember that after Kubrick’s death, Steven Spielberg was set to complete both EWS and also Stanley’s film ‘A.I.’  We will discover that the ‘lame,’ watered-down, CHANGED versions of Spielberg’s films were drastically different than the controversy (Pandora’s Box) Kubrick had conceived.  Kubrick insisted by contract that the release date for EWS had to be July 16, 1999; a date exactly 30 years to the day of the Apollo 11 launch.

The extraordinary analysis of THE SHINING is what is most stunning (as well as vast amounts of clues in EWS).  Now, we can understand the films; only now can we understand when you consider the THEORY behind SK’s mysterious death.  Our Stephen King-type FEAR or horror we originally felt in ‘The Shining’ suddenly goes away after decoding.

Our fears are replaced by a far more sinister force, because it operates in the real world with the NWO.  Symbols of what was really happening in his personal life and what he discovered are revealed in the man’s astounding, visual art.  Investigate clues in ‘Kubrick’s Odyssey.’ 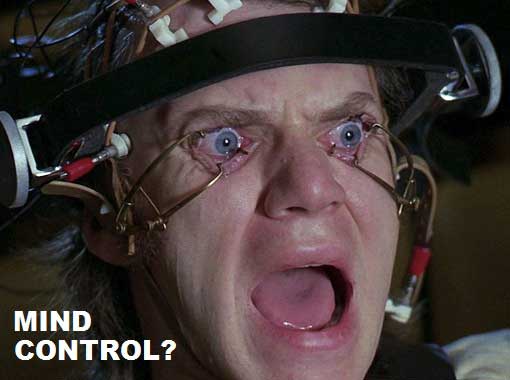 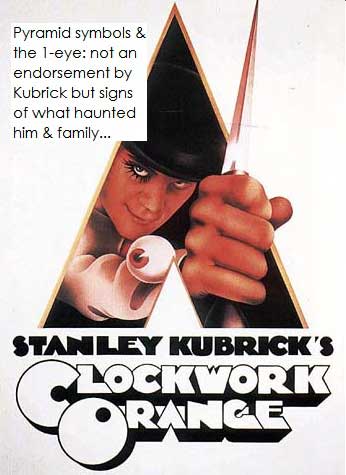 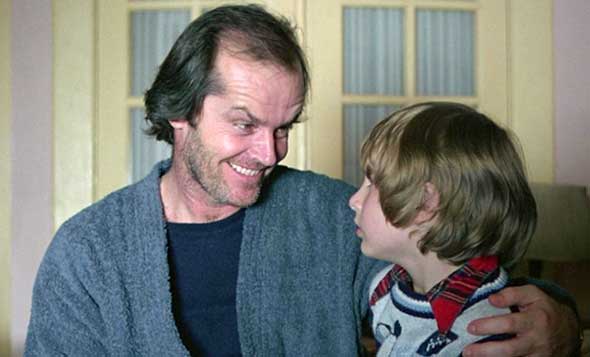 The word is ‘fascinating’ that the Jack Nicholson character and his son, Danny, were both sides of Stanley; his playful, psychic side represented in the boy and a pragmatic/money-side as seen in the father.  The APOLLO 11 sweater Danny wears; rocket images; room change from #217 to #237 to mimic the Moon; car change from King’s version, etc…are simply phenomenal.  Now, we comprehend why there were odd differences from the book to the film.

My two cents is near the beginning of ‘The Shining.’  When we see the actor Barry Nelson inform Mr. Torrance (Jack) about the Overlook closed for the winter…we now notice symbols purposely placed by Kubrick to stand for America and possibly his secret deal.  Weidner tells us Nelson has a toupee which does make him look like JFK along with U.S. flag and eagle statue.

Barry Nelson was the first actor to play Fleming’s Bond!  Ian Fleming sold the idea to live, American television 8 years before Sean Connery or the movies.  Barry Nelson played an American agent called ‘Jimmy Bond.’  Obviously, this was known to Kubrick for the casting.  In a sense, the secret project was a cool/sexy thing at first like a spy novel.  Then, the dark side was revealed as SK (same initials as Stephen King) added the naked girl that turned into an old hag; not in the novel.

[Casino Royale is a 1954 television adaptation of the novel of the same name by Ian Fleming.  An episode of the dramatic anthology series Climax!, the show is the first screen adaptation of a James Bond novel and stars Barry Nelson and Peter Lorre. Though this marks the first onscreen appearance of the character James Bond, Nelson’s character is played as an American agent with “Combined Intelligence” and is referred to as “Jimmy” by several characters]. 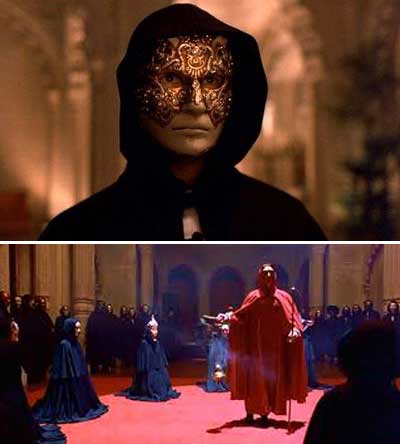 The public controversy that swirled around ‘Eyes Wide Shut’ concerned the sex-scenes that were added by computer to supposedly wipe out spots of graphic sex.  We were misled again to not see the Rothschild influence in the film even to the point of Kubrick using the Rothschild mansion and colors.  People remain blind while their eyes are wide open.  Relatively, only a few free-spirits have come to learn hidden (occult) truths and have the courage to put on the ‘They Live’ sunglasses.

EWS exposed what basically occurs and did not show other horrendous acts performed in places of Secret Societies.  The truth of Bohemian groves will not be permitted to see the light of day.  [Did Seymour Hoffman really OD; a man that had not touched hard drugs in over 20 years?  We will never know the truth from managers of the Oscar-crowd].

Stanley Kubrick was an incredible genius and artist that the world has not fully appreciated.