Aliens Will Save Us!

I was one of the few who survived the ultimate, global holocaust.  I was one of the few they let live.  They are called the Rycon Order; ‘newbies’ to our Solar System who have only studied the ‘problem of Earth’ and been here for the last three years.  The year was 2022; but, did that have any meaning anymore?  My name is Rex Garrison and I am aboard a Ryconian spaceship.  I’m not a prisoner.

I have learned one thing for sure among the aliens over the last two weeks.  They tell the truth.  There was no deception involved when the 12-foot tall, purple buggers proved to me that the Earth was indeed destroyed!  My precious planet was truly pulverized in an incomprehensible, electrical implosion two weeks ago.

Only a force-field which encircles the Moon protected it from the massive destruction of an Earth blown to smithereens.  Apparently, they need the Moon.

I’ve learned a lot about the Rycons while there is much more to learn.  It is like my feelings have been turned, twisted and then, taken on a rollercoaster ride of a lifetime!  At first, I believed in them.  I prayed to them; or…for SOMEONE…to come down to Earth and help us because we so desperately needed help. 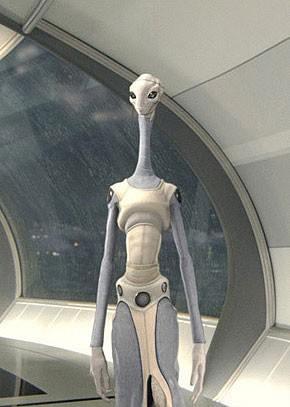 How the hell was I supposed to know that this super space society that appeared ultra passive and beautiful and lovely at first…would wipe out life on Earth?  Was it my fault?  ‘Was it all my bleeding fault?’ kept echoing inside my brain.  My headaches have returned and hurt even more.

‘When did it start?’  That’s right; it began about ten years ago with the Mayan end of the world, which of course was not the end of the world.  Night after night, for weeks going into December 21st, I prayed.  I took bike rides late at night and broadcasted sermons to the stars.  I pleaded my case in cosmic court to SAVE humanity.  We were worth saving.  I hoped I was being heard.  Were they listening?   I had hoped to have an effect…and, in some way, direct action would be the result.

Hell, I wanted spaceships over every major city!  But, not like ‘V’ or ‘Independence Day.’  I wanted the good aliens that I knew had to be out there in the dark vastness.  I wanted them to come down and FORCE us into a better way of living; force us into doing everything the right way.

Now, there is peace.  Now, there is nothing of my precious home.  It no longer exists, thanks to the Rycons.  I’ll never get over it.  I have so many questions.  The aliens still maintain that they have saved Earth.  I don’t understand.

‘They saved it by destroying it?  Death was not the answer; not what I had in mind,’ I said out loud.  I was used to talking to myself.  I mean, I was the only human aboard.  It was my understanding that there were only six Earth women and five other Earthmen left!  I was one of twelve and the only carbon-based thing onboard.

Rycons were certainly a grand mystery.  They are fantastic-looking creatures; bald; purple; of slender build wearing white (Greek) togas.  What I understand or recently learned is they had been brought in as judges…

‘No, that wasn’t it.   Like how lawyers bring in an ultimate decider; receiver; conservator…ah, there’s a word for that; I forget right now.’

I was told by a few of the Rycons that I will finally have an audience with the ‘captain’ of the ship.  Soon; they told me without moving their small mouths.  It was amazing to hear strong thoughts of telepathy and realize I only needed to THINK my communications to them.  You really have to watch your subconscious thoughts when you have a crowd nearby that can hear them.

‘Man, do I have a few things to say to THAT CAPTAIN dude!  Like…’

Ah, that was the equivalent of a doorbell, which means the huge/round door was about to open…nice of them to ring before they barged in.

It silently opened and there stood a magnificent Rycon.  You could only tell their sex if you looked closely.  I had to raise my head to see his or her head.  I heard the thoughts of a tall, purple person in a white toga that expressed:  Come with me, Mr. Garrison.

She turned and I followed her out of my large, circular, white room.  Were you treated well? she asked me in thoughts.

‘Very well.  I had everything…except?’

I decided to think my reply.  Well, except answers to my questions.

Did the vids we provided not answer your questions?  We thought they would.

‘They did not,’ I stated emphatically while we walked.  ‘I mean, yeah…I learned a lot of shit I did not know about the goings-on of the Solar System I never dreamed!  What I mean is…some of the WHYS.  I have deep questions and the answers were not on the vids.’

You will find Captain Voxx forthcoming.  Your inquiries will be resolved by the truth.  We are almost there.

We approached another huge, white door.  This was new.  The leader of their little group had to be on the other side.  I looked up again.  I thought to her, was it right to destroy my planet?  Wasn’t there better alternatives?  What do you think?  I desperately monitored her expressions and thoughts coming from high above me.

She blanked her thoughts and communicated, please ask Captain Voxx.  He will help you…

Yes, but will he help me…  The door noiselessly opened to the prime control area where Voxx sat like a purple King on a throne.  The guide’s long hand gestured me inside. 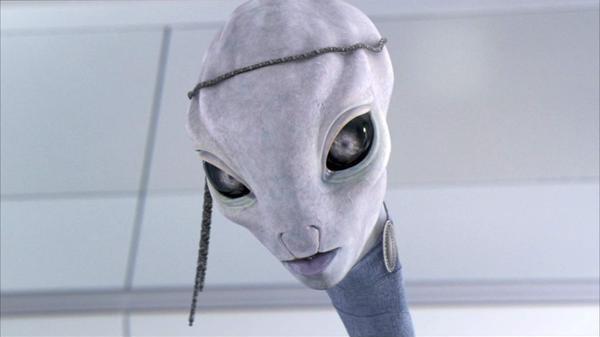 I entered the amazing, round room.  Rycons had a great lack of dials or buttons for a Control Room.  The bridge of the ship appeared as a spherical, white lagoon with soft steps on its borders.  The décor was minimal with only a few shapes which were curved and very smooth.

Voxx was busy with two other Rycons with their version of official business.  I had the feeling the Captain knew I was there but did not respond as I slowly crept closer to three violet giants.  The two finished and left after clicking bands around their thin wrists.  Rycons seemed to master technology without it being present or obvious.  Captain Voxx welcomed me as his small mouth bent into a smile.

I sat in midair and knew that a ‘chair-blob’ would instantly POP into existence and catch my fall.  I was getting used to that on the ship.  The soft comfort was extraordinary.  Voxx approved with a nod.

I decided to talk as a human and concentrate exactly on the words I was saying.  In that way, anything improper from my subconscious might tend to not be in the conversation.  I began.

‘Thank you for your excellent treatment over the past two weeks.  I’ve been in a magical wonderland.  …I hated what the Rycons had done.’  I looked down.  ‘Still do.’  I looked into the leader’s eyes.  ‘But…I have a…slightly better understanding to…WHY…maybe it had to be done?  Because it was HELL!  But, sir…I question this!’

Voxx smiled again and replied with, I understand…

I cut the purple King off quickly with, ‘oh, wanted to thank you for sparing my life!  I am SO SORRY to interrupt.  You were…please…’

The Captain appeared to smile more and was not offended.  I understand you.  We see into you and know what troubles you.  You wanted another solution; you wanted an answer other than annihilation…where it would WORK…as it was…only for us, like in ‘Wings Over the World,’ to enforce CHANGE…change for the better…

What of the war? Voxx expressed to me as if some ultimate war had already happened.

I was confused.  ‘Do you mean Earth wars?  Oh, you mean the Resistance Movement against you when you arrived?’

Your resistance would escalate until wars destroyed your own planet in the worst of ways.  Tell me, Mr. Garrison; did our worldwide presence in your space for years end your wars and unite the planet?

Voxx continued, Earth wars raged; wholesale destruction with incredible casualties while our ships hovered above you.  You were still trying your best to kill each other, even with us standing over you.

I started to cry.  ‘I know h-how bad it was!  The pain, the starving; even fucking c-cannibalism.  I almost don’t blame you…it was that bad!’  I let go in a torrent of tears as I fell off the chair-blob and hit the white floor.

I started again with, ‘the rich had…so much; it could have worked…w-with a redistribution…’

‘Something should have been…tried…anything!’  I was a child who did not understand the reality of my parents’ world.  I knew it was futile.  They were right.  It had gotten so bad we were an abomination to Life.  We had to go.  ‘Oh God, I thought you were going to SAVE the planet!’

‘You DESTROYED IT!!  That’s your idea of saving the Earth?!’ I screamed from the floor.

No…this is.  Suddenly, the purple giant stood up.  It was astounding how tall the Captain was towering over me.  The move to standing was very dramatic.  Over here.

What? I thought.  ‘I learned the Venusians were on our side all the way…with Tesla and Valiant Thor; the whole Retz Council who WANTED to intercede and they were completely nullified by…what?  A group called ‘Ghosts of Mars’ or dark forces in a war between positive and negative?  Past vs. future?’

I got to my feet and also out of the strange interlude stating facts from the vids.

Voxx moved his long, slim arm so that his hand was over a white orb in midair.

I finally trudged over to the Captain and under the orb.  I stared intently to what was happening above.  Wait.  What did he say?  Saved the Earth? 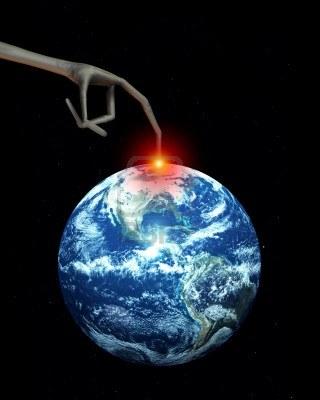 A copy is right here…saved.  Voxx expressed as nonchalantly as we hit ‘save as’ on our computers.  The white orb became the Earth.  A miniature version of planet Earth stood over me like a basketball frozen in time.  Would you like to rename it?

Voxx pressed a section of his wristband and the Earth copy EXPANDED OUTWARD and became a new planet!  It was absolutely beautiful, clean and perfect.

I was now on a new Earth.  This seemed very real.  I could not help but return to my crying.  It wasn’t the end.  It’s why I never got an ominous, negative vibe from these giants.  It was left up to them to arrive at a solution.  Earth II was going to begin again without the bad; without the rich; without money; without fascists; without nukes; without the need for armies or guns!  It would be a new world with visitors from many (off-world) HUMAN colonies on other planets.  We will be cosmically incorporated.  Everything will work this time because our children will be educated on the right way to live in the universe…

It has been renamed…and saved.