In their new book, Viral Mythology, popular scholars and prolific authors Marie D. Jones and Larry Flaxman reveal the fascinating phenomenon of “archeoenigmas,” which are ancient images, stories and symbols that impart metaphysical truths and scientific information. Hidden within the art, the song, the texts and the built structures of ancient times is a vast treasure chest of wisdom that is as relevant today as it was eons ago.

Viral Mythology: How the Truth of the Ancients was Encoded and Passed Down through Legend, Art, and Architecture

“[There is] a growing need to further understand the significance of ancient symbolism as it continues to accompany us in these modern times. This symbolism gets to the core of what makes us human… and [plays] an integral part in the creation, development, and sustainment of our overall collective psyche.”   –John Richard Ward, coauthor of The Exodus Reality

Behind every myth, fairy tale, and legend–hidden within the art, song, and structures of ancient times–is an encoded layer of wisdom, science, and truth passed down throughout history. This book will examine how information went “viral” long before the Internet, and served as the foundation for mythology, sacred architecture, and symbolic imagery throughout the ancient world.

The Search for Hidden Truth In Story, Symbol and Form

An Article by Marie D. Jones and Larry Flaxman

Behind every origin story of ancient cultures and civilizations…behind every myth, every fairly tale and folklore and every religious text is an underlying layer of truth that describes the scientific knowledge and spiritual wisdom of the time. These amazing stories and myths may also hold a storehouse of hidden knowledge that matches today’s most cutting edge theories and discoveries. To those that came before us, where language was in its infancy and lacked today’s sophistication, the facts were, in fact, the story, and somehow, that story had to be considered important enough to go “viral” and spread from one culture to the next.

From the implicate and secret knowledge embedded in fairy tales, folklore and cosmogenesis stories, to the amazing science behind myth and religious writings from all over the world, what we have come to know as story contains more fact, more information, than we ever imagined. But that fact is often hidden behind a beginning, middle and an end, with a message, or a theme…a story meant to impart information even as it entertains or continues a heritage and legacy of a people from generation to generation.

Our ancient religious texts, myths and folklore show how even the most primitive cultures understood the world around them far more than we give them credit for, and may have actually contained common beliefs, concepts and understandings of the times. These are examples of “monomyth,” the common structures found in all myth and ancient stories. These common elements are surprising when we consider that people in those days had no simple means of spreading ideas.

How, then, did such distant cultures share so many similar ideas?
Aside from common themes, we also must ask, how did they know what they knew?
Historians, anthropologists and archeologists all stand in awe of the sophistication of various monuments built around celestial activities our primitive ancestors could not have known about…or could they?

Scientists are amazed at the intricate knowledge our ancestors had, made evident in their drawings, maps, writings and oral traditions, of the natural world they existed in, long before computers and Google and wikis were invented.

We still struggle to understand how ancient cultures could achieve what they did minus the advances we take for granted.

But the ancients didn’t just communicate their knowledge and information via the stories they told. They also utilized art and architecture, ripe with intriguing common themes and elements, motifs and iconography and symbolism. Information can come to us in pictures, as rock and cave art of our primitive ancestors tell of their close connection with nature and natural cycles and phenomena, and even potentially supernatural phenomena. Across the globe, both primitive and ancient art and architecture often present elements so similar to one another, it suggests that certain themes were archetypal to the entirety of humanity. Why did so many diverse civilizations, separated by thousands of miles, with no real means or methods of communication, all use the same symbolic imagery, with only slight regionally influenced variations? Was there some outside influence spreading these common themes, or were these cultures tapping into a field of ideas and information that existed in the collective subconscious?

The highly popular “ancient astronaut theory” is one way we attempt to explain the leaps in knowledge, as well as how that knowledge spread over large distances so quickly.

Other theories include the science of memetics; the field/Grid theory of an invisible and implicate clearinghouse of information available to everyone at any time; and even good old word of mouth! All of these theories have validity and merit, and might help us better understand what our ancestors wanted to tell us, including those things we continue to argue, even kill each other, over, such as religious
beliefs, traditions and historical events.

How information spread and went “viral” long before we possessed cell phones and social networking and the Internet speaks volumes about how communication itself evolved in ancient times, and what was important enough for them to communicate in the first place. Whether their modus operandi was fairy tales or folk legends, myth or religious parable, rock art or vase paintings, mosaic tile floors or lavish cathedrals built to precise sacred geometric measurements, pyramids or stone henges, or those strange objects out of time and place we call “archeoenigmas,” our ancient ancestors communicate with us, today, in so many ways. It is up to us, though, to correctly interpret their “viral mythology” and what it meant to them, as well as what they hope it will mean to us.
What it all comes down to, though, is about the way our ancestors often communicated information by encoding and embedding it in the creativity, art, architecture and the imagination of the times, out of direct sight of those who might not want that truth revealed. Even as we look back into the past, we see that viral mythology is also about how the stories we tell today, and the art and architecture we imagine and build into form, will embed the information we want to communicate to future generations, and create and shape our future in the same manner. The tales we tell today become the viral mythology of tomorrow. What are we leaving behind and what will it say about who we were and what was important to us? What will future descendants think of us when, one day on an archeological dig, they find our cell phones, our computers, our toys and comic books and temples and mosques and churches, our television shows and movies, our novels and plastic water bottles and houses and mansions and tent cities and trash dumps and ghettos, our jewelry and tattoos and texts and emails and pet clothing…

Jones and Flaxman are the authors of Viral Mythology: How the Truth of the Ancients Was Encoded and Passed Down through Legend, Art, and Architecture published by New Page. ISBN: 978-1-60163-295-1 List Price: US $15.99.

LONG BEFORE we had the Internet, YouTube and Facebook, ideas and knowledge went viral through storytelling, the use of art, and architecture. Long before we had the ability to fire off a text via cell phone, or email a news item and watch it go “viral” across the globe in a matter of minutes, our ancient ancestors had their own ways of encoding and transmitting important information that would stand the test of time.

Viral Mythology explores how ancient civilizations and cultures relied on various means of spreading information within the context of their stories, oral traditions, religious texts, cave and rock art, pottery, paintings and even their monuments, edifices and holy and sacred sites.

Today, we are left with the task of looking back in time to see just what was important to the cultures of the past, and how they influence our understanding of who we are, where we came from, and what our place may be in the world. By examining the origin stories, myths and even fairy tales of the past, we come to find deep truths embedded within the fantastical. By looking at the images and symbols etched into stone and on cave walls, and the more sophisticated art of later eras, we come to understand what our ancestors revered and worshipped. By exploring the ruins of pyramids, henges, monuments, temples and churches of old, we open the door to discover what our ancestors believed in and how they viewed their place in the cosmos.

Viral Mythology speaks to our present, and our future, by looking at what information was deemed important enough to be passed down to our generations, to be discovered and uncovered in the layers of earth and history. It also speaks to the scientific understanding of our ancestors, in clues embedded in their stories and art and buildings that allow us to see how close they lived with the natural world, and how well they understood its inner workings, even if they lacked the scientific acumen to describe it that we have today.

We can come to fully understand who we are by looking at how ideas and information goes viral today, and apply it to the past, to realize that ideas and knowledge always find a way to stand up to time. The Viral Mythology of the past is our present, and we are now creating the Viral Mythology that will define us to future generations. 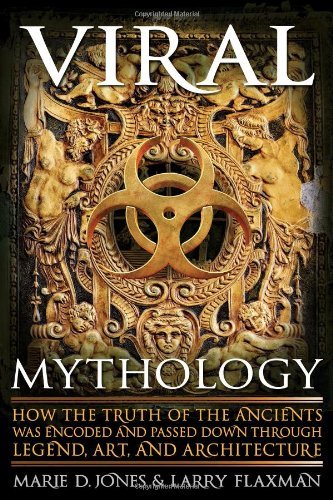