THE SCROLLS The Missing Eighteen Years

American geologist Dr. Mark Malloy along with Israeli geologist Dr. Gilda Baer discover ancient copper scrolls while studying sinkholes near the Dead Sea. Forced to sign a secrecy agreement, they are forbidden to discuss their find. Translation of the scrolls by a team of Israeli archeologists lead by Dr. Amos Meyer determines them to be the earliest version of the New Testament. The scrolls include details on the 18 years of Jesus’ life missing from the Bible that could change Christianity.

Fearing what the release of this information could do to the two billion dollar Christian tourist industry, the Israeli Minister of Tourism solicits the help of a corrupt financial officer of a fundamentalist mega church in the United States. Together they hatch a plan ensuring the scrolls will never become public. Questioning the scrolls’ authenticity, the plan requires corroborating evidence as a condition for their release. This requirement triggers a quest by Gilda, Mark and Dr. Meyer, one that the church official believes will be a time-consuming wild goose chase. Dr. Meyer, however, has promising leads he wants to pursue, turning the barrier to the scrolls release into an opportunity.

Once again, they return to Jerusalem without corroborating evidence. Dr. Meyer is familiar with a book about Issa written by a Russian medical doctor who, in the late 1800s, discovered Tibetan scrolls in Northern India, but were last seen at a monastery in Lhasa, Tibet. Piecing together the 2000-year-old events, while in Babylon, Jesus apparently encountered Buddhist and Hindu monks traveling the Silk Road, followed them to Northern India, the birthplace of Buddhism, where He, Issa, studied and taught. 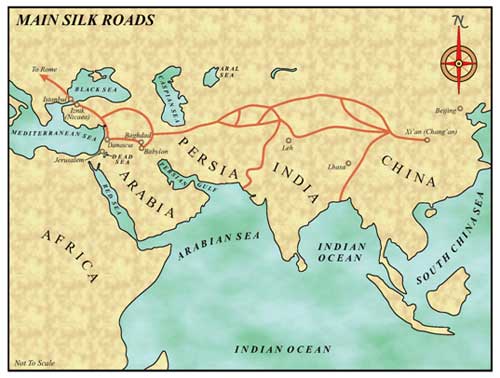 Dr. Meyer, Mark and Gilda next journey to picturesque Lhasa, where they learn the Tibetan scrolls were confiscated by invading Chinese in 1950. Speaking to an elderly monk who read the scrolls before they were taken, they learn new revelations about Jesus, causing Mark to question the Crucifixion and Resurrection. The monk tells them that after staying in Northern India for seven years, Issa became interested in Taoism and continued on the Silk Road to its eastern terminus and the Big Wild Goose Pagoda in Xi’an.

Without reporting their movement, the scientists make a snap decision and head for Xi’an. Visiting the Big Wild Goose Pagoda, they meet another Buddhist monk and learn of an artifact from the time of Jesus’ travels. Here they must deal with an earthquake that destroys the pagoda, seriously injuring Gilda. Even if they manage to remove the artifact from China, they are unsure what awaits them in Jerusalem.

This story is told from the point of view of Mark, who has a quirky propensity to inject geology into many discussions. His interests also include Biblical and religious history, especially where they intersect with geology, which he readily points out. Mark is particularly proud when evidence shows that Jesus was a stonemason as opposed to the mistranslated Greek indicating He was a carpenter. 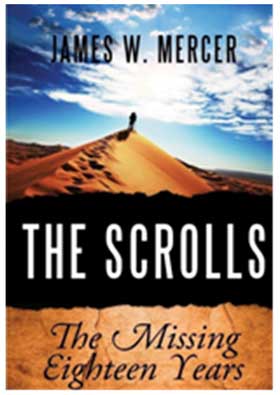 Excerpt from “The Scrolls”

If something is in me which can be called religious then it is the unbounded admiration for the structure of the world so far as our science can reveal it.
—Albert Einstein, The Human Side

Looking down, Mark checked his watch. It was just after 1 PM. They were running late.
“Watch out!” cried Gilda as Mark drove quickly around a hairpin curve on the gravel road.
“What are those?” he asked, looking up in amazement and simultaneously hitting the brakes. In the middle of the narrow road were several deer-like animals he had never seen before. The wheels locked, causing the Range Rover to slow and fishtail slightly, just missing several of the animals.
Bracing herself in response to the sudden stop, Gilda shook her head, smiled, and replied, “They are ibexes, common in this area.” Pointing, she continued, “Those huge, round horns are typical. Ibexes are similar to your North American mountain goat.”
Her slight accent, which Mark found appealing, gave away her Israeli origins. She added, “As you can see, they are large animals and would cause considerable damage if we hit one.”
Mark counted eight. Cautiously, he made his way through the herd, surprised the vehicle didn’t frighten them.
Once past the ibexes, he hit the accelerator and inadvertently kicked up gravel.
Feigning distress, Gilda’s response was immediate, her tone playful, “What’s the hurry? Where did you learn to drive anyway?”
Mark again looked her way. She was smiling, a look that strongly affected him. He responded a little sheepishly, “Sorry.” He added, “I learned to drive in the Florida panhandle, but not in a Range Rover.”
“Huh,” responded Gilda. “Driving a Range Rover is a piece of pie.”
“You mean ‘a piece of cake’,” Mark grinned.
“Whatever,” she said testily. “Pie, cake … what difference does it make? Range Rovers are easy to drive.”

Dr. Mark Malloy, an American geologist with Florida State University (FSU) in Tallahassee, was on sabbatical working with the Geological Survey of Israel (GSI) studying the formation of sinkholes. His interest in these often treacherous depressions stemmed from their occurrence in his home state, where they were known to swallow up entire homes.
His research included studying the impacts of geological processes on early civilizations. These processes, such as the formation of springs or earthquakes, often influenced ancient man’s decisions and his myths or religions. For Mark, working in Israel was exciting and would lead to publications. His university definitely adhered to the adage “publish or perish”—perish like the dinosaurs, a colleague had once told him. He had been working in Israel for several months now and planned to remain until midsummer, when his sabbatical would end and he would return to FSU in time for the fall semester.
As others who traveled to this part of the globe, Mark took an avid interest in religious history, especially Biblical history, and now he was in the area where much of that history had unfolded. Rock formations were visible in all directions, and he felt he was in his element. Geologic processes shaped these formations, profoundly influencing stories in the Bible. He looked forward to exploring the relationships between Biblical stories and the geology surrounding him.
Good-natured, his sense of humor often took the form of teasing. At age thirty-four and still single, Mark was considered handsome by many of his female students. Almost six feet tall, he had a thick crop of brown hair peppered with streaks of gray, a premature condition inherited from his mother’s side of the family. What caught the attention of most people were his dark, expressive brown eyes, where the colors of his pupil and iris merged as one.

For more excerpts (and to order) please visit:  http://jameswmercerbooks.com/

Some authors search of answers about where Jesus was during the “Hidden Years” from ages 12 to 30. 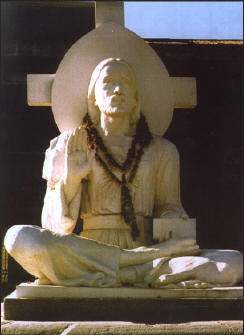 It begins with a former Fundamentalist from Texas, ousted from his provincial church for asking too many questions. “If God wanted you to know about that, it would have been in the Bible, [he is told], so stick to worrying about your own salvation.” 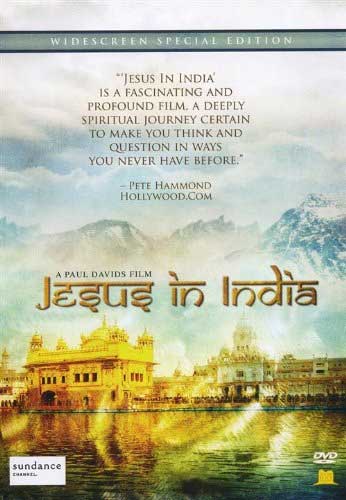 But that’s not good enough for Edward T. Martin, and thus begins a seeker’s quest across 4000 miles of India in search of answers about where Jesus was during the “Hidden Years” from ages 12 to 30. The New Testament is silent on those years, however in India there is an ancient tradition that young Jesus joined a caravan and took the Silk Road to the East, where He lived with both Hindus and Buddhists before returning to begin His ministry.

To what extent are these traditions based on evidence, and why does the “Pope” of Hinduism now insist that Jesus was in India?
Why does Professor Elaine Pagels of Princeton University, a world-renowned Biblical scholar, say we cannot rule this out? Scholars and religious authorities are joined in this film by the Dalai Lama and an Apostolic Nuncio of Pope John Paul II.

You will hear all sides, and you will be shocked and surprised by some of the answers offered for the Bible’s silence about JESUS IN INDIA.   Jesus in India – DVD

PS2  The shocking truth about Jesus of Nazareth!

“It is doubtful if any man was ever more misunderstood by the people of his own time than Jesus of Nazareth. Certainly no man was ever more grossly misrepresented by succeeding generations, and especially by those who professed to be his friends and followers.”   — Wallace D. Wattles, “Jesus: The Man and His Work”

On November 11, 1905, Wallace D. Wattles, who went on to write some of the most powerful, life changing books ever written, including his classic masterpiece, “The Science of Getting Rich“, addressed an audience gathered at the Auditorium in Cincinnati, Ohio to hear him lecture. In that short, but very powerful lecture, Wallace D. Wattles shattered orthodox misconceptions, misunderstandings, and outright misrepresentations of the character and teachings of Jesus and shared his vision of the real Christ and His true call. The lecture made such a favorable impression on certain listeners that they wanted to have it printed if Wallace D. Wattles provided the manuscript. That he did and the manuscript was privately printed. Like many privately printed publications of this type, it had a very limited distribution and like many of them from its day, its few copies quickly disappeared over time never to be seen again… Until now!

Get the e-book by Wallace D. Wattles “Jesus: The Man and His Work” >>