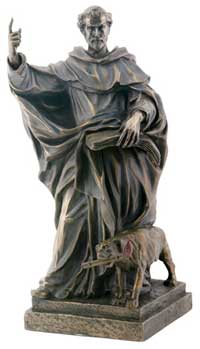 According to his mother whilst pregnant she saw in a dream a dog holding torch in its mouth that ‘seemed to set the earth on fire’. As in his name, the Latin version of the Dominican order is Dominicanus, or, ‘Domini Canus’ translating as ‘Dog of the Lord’. A second hint relates to Byzantine depictions showing the much venerated Catholic Saint St Christopher as dog headed.

For me, the conundrum took on an even deeper adventure with the discovery in 2005 of a most unexpected image upon Christ’s platter at the scene of the Last Supper high up the stain glass Great East Window of Lincoln Cathedral, England which, owing to its small size, had gone unnoticed until the glass was inspected prior to cleaning. 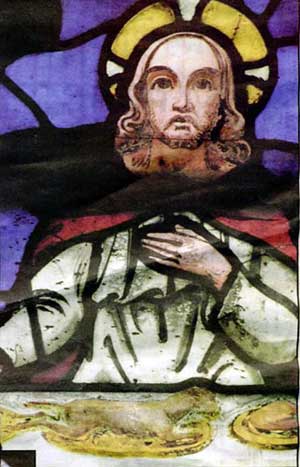 No loaf of bread or cup of wine on the plate as one would expect, instead a dog! This was the beginning of an amazing quest that is still vibrantly on going today, exposed as being allied to the global mystery of Rennes-le-Chateau with metaphors and symbology pertaining to ‘The Holy Grail’.

Additionally, along the Nave within the Cathedral, at a 15thc German woodcut of Jesus on his journey to Calvary, we see the same dog again, curiously and insouciantly apart from the scene and yet staring up at the oppressed Jesus.

Dog at the Station of the Cross, Lincoln Cathedral

Two books and one movie documentary later on the subject, I still find myself being led through the mechanism of synchronicity and the agency of the Collective Unconscious to discover more. It would have been fortuitous to have found the dog on the platter at Lincoln alone, but as the trail began to connect with the biblical figure of Mary Magdalene, I found another unexpected dog on stain glass, this time in France. 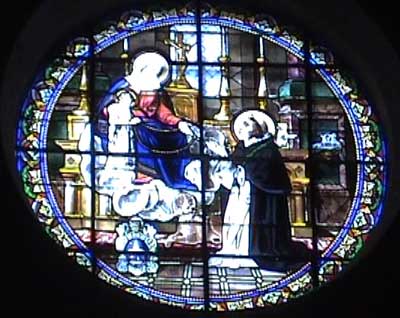 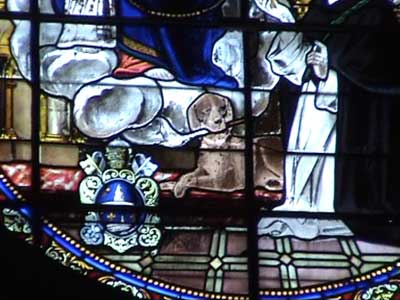 Detail –  Dog at the feet of Mary

The church of the Grail entwined Mary Magdalene within the Languedoc town of Beziers in France has a significance in history, for it was here on the Feast Day of Mary Magdalene in 1209 that the entire village of its 20,000 Cathar stronghold were mercilessly wiped out in an act of genocide by the Catholic Church for the residents belief that Jesus and Mary were husband and wife.  Again, on stain glass, this time at the feet of the Virgin Mary we find a dog, cryptically connecting the church and its history with that of, Lincoln Cathedral. The dog is holding torch in its mouth, unmistakenly allying the image to St Dominic whose usual statues show him  with a dog holding a torch, as well as a star above his forehead for at the time of his baptism his godmother saw a star of extraordinary magnitude descend from the heavens to nestle there. Traditionally the origin of the rosary is accredited to Dominic when the Virgin Mary appeared to present him with it. From the Latin ‘rosarium’ it is not difficult to see its connection with ‘rosa’, the rose, symbol of Mary Magdalene and the Holy Grail.

In 2011, back in Lincoln at a Chapel in the General Hospital and led again by serendipity, I found another representation of a on looking dog in a biblical stain glass scene, this time of Joseph and Mary as she holds the baby Jesus. 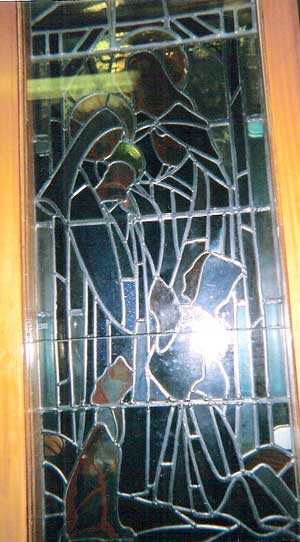 With these constant reappearances of a dog, what are we being told, and who is telling us? My understanding of the symbologies that are employed in religious icons, painting and sculptures, often going unnoticed as they are not expected to be there, is that they are the handiwork of the Collective Unconscious working through the unwittingly innocent artist or sculptor, it is as if Mind itself is ensuring the placing of them there to guarantee true accounts of events are never truly lost.That these anomalies often go without our recognition is explained by the neurological phenomenon called Scotoma. It is simple –  the brain only sees what it expects to see and bypasses what is actually there until it is pointed out at length. Perhaps the best known example of this returns us to the Last Supper where it went unnoticed for centuries in Da Vinci’s painting that the disciple John alongside Christ actually looked like a woman, for many now, a representation of Mary Magdalene.

The answer to why we are seeing this unexpected dog in Christly associated presentations, and why the word god in reverse is dog does appear to be emanating from the deep unconscious. Back in the early 90’s in the days when many of us where still using word processors and ribbon, my wife made an alarming discovery. Removing it from the machine, she took a look at my freshly discarded ribbon and within moments exclaimed to me, ‘Why have you put these messages in here?’ as she studied the sequence of words that obviously were viewed in reverse. Sure enough, in amongst the vast length of unwinding ribbon there were clear words and short sentences. How could I have created this, something that would have belonged more appropriately in a spy movie with its hidden script, let alone not notice? It was simply just the  reversed product of what I had written naturally and intentionally?

At that time I did not realise that I would not be alone in this phenomenon, which I now recognise as a bi-product of what is now referred to as the phenomenon of Reverse Speech – hidden backward messages in speech – discovered by Australian David John Oates during the 1980’s who announced that bi-level speech or language functions both backwards and reverse, giving numerous examples of how on reversed tape amidst obvious and expected of gibberish, intervals of short sentenced clear statements relating to the forward speech constantly appear as unconscious thought patterns. Futhermore, these words and messages is the unconscious and more truthful mind speaking correcting the inconsistencies – and deliberate lies – of conventional speech. In an email to me, David confirmed that god and dog are what he calls constant reversals, ‘They will always reverse to each other – I don’t document them when I hear them.’  Is it possible that ‘dog’ is an older lost word than ‘god’, and if so, where or what is the significance?

Outside of both a dog and, in a sense, Jesus being ‘Man’s best friend’, the  most famous of dog related instances is that of the brightest star in the heavens, Sirius, apparently given the appellation ‘The Dog Star’ as it is the chief body in the constellation of Canis Major, the Big Dog. If we read the word ‘canine’, like or pertaining to the dog, as the sounding ‘K9’ and translate’ K’ to be the  11th letter of the alphabet, and add the 9 to it, we total 20, the number of the Tarot card that is Judgement, and ‘Judgement Day’ is also known as The Day of Christ. Time now to embark (canine pun intended!) on a short paper chase investigating links to the word that designates the young offspring of a dog.  ‘Puppy’, a young dog , diminutive ‘pup’, from the App. French ‘poupee’ – a doll or puppet, Latin ‘pupa’. Pupa is a word referring to an intermediate stage of development in inveterbrates, an evolution, again from Latin ‘pupa’ which means ‘a girl or doll’. ‘Puppet’ comes from the Old French ‘poupette’ diminutive from Latin ‘pupa’. It seems that from puppy we have traced both doll and girl. Time now to look at a particular type of puppet, the marionette, its origin from the French diminutive of the name Marion, itself a diminutive of Mary, of Mary. By taking an investigation starting with puppy we have found a girl, Mary. Mary Magdalene?

The female of the dog, the bitch, is receptive for pregnancy when ‘in heat’, and Sirius the dog star and its origin ‘Seirios’ (containing both anagrams ‘rose’ , the symbol of the Magdalene, an ‘sire’ an animal term meaning to beget) means ‘scorching’ and to signify heat. 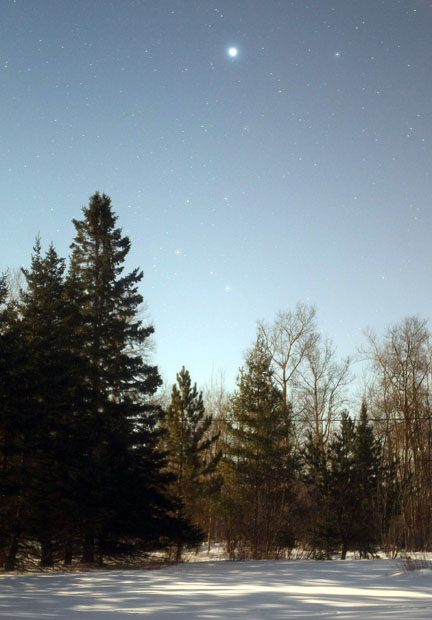 It is in perfect alignment with the star formation in the belt of Orion known as the ‘The Three Kings’, those of the Orient – more correctly ‘orientation’ – who followed the star of Bethlehem that led them to Christ’s birth place, the three stars representing the three Magi who traced him to his manger. Given this, it looks suspicious when we come across well known the phrase ‘A dog in a manger’, the accepted explanation for the expression meaning someone who has something of value that they cannot or will not use themselves but which they won’t let anybody else have either…the secret of a connection with Sirius, of which the five pointed blazing star, that blazing ‘torch,’ can be seen in every Masonic Lodge, and surely the same star associated with the Dog Lord Dominic?

Is the Collective Unconscious telling us that Sirius in some way is responsible for the birth and evolution of the human race? The origin of the word ‘doll’ which we found earlier, is another classic unknown which I  have found to belong to the word ‘model’, the original pattern and design of the human race. If Sirius is in some way an Erik Von Daniken style substitute for our understanding of God’s creation of mankind, it would make sense of the name of the tribe, the Dogon of Southern Mali, when reversed – ‘No god’ – for it was this primitive African tribe who first learned precise astronomical understanding of Sirius from their ancestors, centuries before modern day astronomers finally made their own discoveries that embarrassingly confirmed those of the Dogon. Radio astronomy has proven to us that the iron content of the star Sirius is the same as the iron in our blood and the iron of the earth and of our solar system.

The blood and the Grail?

More articles by the author >>

A palindrome is a word, phrase, number, or other sequence of units that can be read the same way in either direction, with general allowances for adjustments to punctuation and word dividers (e.g. level, noon,deed, “Madam, I’m Adam”).
A semordnilap is a name coined for a word or phrase that spells a different word or phrase backwards. The word “semordnilap” is itself  “palindromes”  spelled backwards.
Are these examples below just a coincidence?