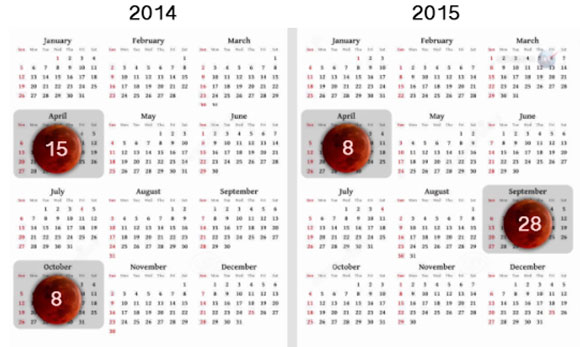 It will be one of 8 tetrads during the 21st century AD. Like all eclipses, it is probable that the moon will appear to be a dark red color during the eclipse due to the refraction of sunlight through the Earth’s atmosphere. This is the same effect that causes sunsets to appear red. 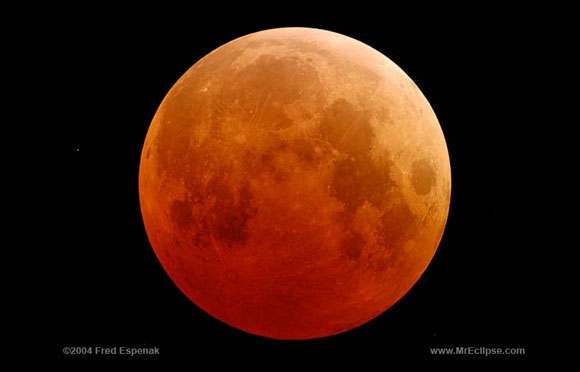 The Blood Moon Prophecy is an idea popularized by Christian pastors John Hagee and Mark Biltz that states the upcoming tetrad (a series of four consecutive total lunar eclipses, with six full moons in between, and no intervening partial lunar eclipses) which begins with the April 2014 lunar eclipse is a sign of significant things to come. Biltz believes that the Second Coming will coincide with the final eclipse of the tetrad, while Hagee only believes the eclipses are a sign of coming change in the course of history for Israel.

The Blood Moon Prophecy quickly gained attention on the Internet shortly after Biltz first proposed it in 2008, and gained mainstream media attention shortly before the April 15, 2014 lunar eclipse. Hagee’s book on the subject became a best seller.

Despite the attention, few Christians believe the prophecy. It has been criticized by both mainstream Christian sources and secular astronomy blogs. Critiques point out that tetrads that correspond with Jewish feasts are not as rare as Hagee and Biltz imply, that the eclipses will not be visible in Israel, and that the Bible also states it is impossible to know when the Second Coming will occur.

In John Hagee’s book, Four Blood Moons: Something is about to change, he argues that the timing of the eclipse and subsequent eclipse in the tetrad (all coinciding with Passover and Sukkot) and the “rarity” of a tetrad is strong evidence a major change of course in history will occur. Both Hagee and Biltz note that the last three tetrads to coincide with Passover and Sukkot roughly corresponded with important events in Jewish history: the 1493–94 tetrad roughly aligns with the 1492 expulsion of the Jews from Spain; the 1949–50 event roughly corresponds with the re-establishment of the state of Israel in 1948 and the ensuing 1948 Arab-Israeli War; and the 1967–68 tetrad started right before the Six Day War. The tetrad is thus seen a “sign” of things to come.Overall, there have been 62 tetrads since the first century AD, eight of which have coincided with the feasts of Passover and Sukkot.

Biltz goes further than Hagee, equating the eclipse with Joel 2:31. The verse says the moon will turn to blood “before the great and dreadful day of the LORD comes.” The probable red appearance of the moon during the April 15 eclipse is thus equated with the verse. Five other verses (Isaiah 13:10, Joel 2:10, Joel 3:15, Matthew 24:29, and Revelation 6:12) are also cited. Biltz predicts that the Second Coming of Jesus will coincide with final eclipse of the tetrad.

“…There will be signs in the sun, in the moon, and in the stars…Now when these things begin to happen, look up and lift up your heads, because your redemption draws near.” Luke 21:25a, 28

The Book of Genesis says God uses the sun, moon, and stars for signs and seasons. Examples can be found throughout the Bible.

Think of how a star led the wise men to Jesus or how the sun stood still as Joshua led Israel to victory over its enemies.

According to Pastor John Hagee, God is getting ready to speak this way once again.

“There’s a sense in the world that things are changing and God is trying to communicate with us in a supernatural way,” Hagee told CBN News.

In his latest book, Four Blood Moons: Something Is About to Change, Hagee lays out what he calls celestial signals. He describes how a series of blood moons in 2014 and 2015 will have great significance for Israel.

Although single blood moons happen fairly regularly, four appearing so closely together is extremely rare. There have only been a series of blood moons a handful of times over the past 500 years.

So what exactly is a blood moon and what is the biblical significance?

“A blood moon is when the Earth comes between the sun and the moon,” Hagee explained. “And the sun is shining through the atmosphere of the Earth and casts up on the moon a red shadow. And so the moon appears to be red.”

In the book of Joel, God says there will be “wonders in the heavens and in the earth, blood, and fire…the sun will be turned to darkness and the moon to blood before the coming of the great and dreadful day of the Lord.”

In Acts, the Apostle Peter repeats that verse from Joel. And the book of Revelation says that during the Great Tribulation, “the moon will become like blood.”

Blood moons are set to appear in April 2014, on Passover, and then again in September 2014 during the Feast of Tabernacles, or Sukkot.

The timing is the same for 2015 — a total of four blood moons, all appearing on Jewish feast days.

“The sun and the moon and the Earth are controlled by God almighty,” Hagee said. “He is the one that is getting them in a direct alignment on a certain day at a certain time — but each time, it’s a Passover or Sukkot.

In the past, the rare appearance of four blood moons on these feast days has coincided with major events for Israel and the Jewish people.

In 1492, Spain expelled the Jews. Columbus also discovered America, which became a safe haven for the Jewish people.

“In each of these blood moons, you have something that begins in tragedy and ends in triumph,” Hagee explained.

“After 2,000 years, God supernaturally brought them from 66 nations and a nation was born in a day,” Hagee noted. “That again was a supernatural something that happened following the tragedy of the Holocaust.”

In 1967, Israel won the Six-Day War and recaptured Jerusalem.

“For the first time in 2,000 years, Jerusalem and the State of Israel were together again,” Hagee said.

The blood moons of 2014 and 2015 are poised to appear as Iran works toward nuclear weapons and Israel’s neighbors, Egypt and Syria, are in chaos.

“The only reason that Iran will not acquire a nuclear bomb will be that Israel chooses a military solution to that crisis,” Hagee told CBN News.

Hagee has been warning of the Iranian nuclear threat through his work with Christians United for Israel, which he founded in 2006. It is now the largest pro-Israel organization in America, with some 1.3 million members.

He holds nights to honor Israel across the country and at San Antonio’s Cornerstone Church, where he serves as senior pastor. The first event, in 1981, drew bomb threats and vandalism from anti-Semites.

Yet Hagee continues his mission.

“If there was ever a time for the Christians of America to stiffen their spine and stand up and speak up, it’s now,” Hagee admonished. “To see evil and not call it evil is evil. Not to speak is to speak. We cannot be silent and receive God’s approval at a time like this.”

He said it’s still unclear what the coming blood moons will bring, but he is certain of one thing.

“When all is said and done, the flag of Israel will be flying over the walls of the city of Jerusalem when Messiah comes, and it’s going to be forever,” he said. “And every nation that rises up in judgment against Israel God will punish and punish severely.”

Four Blood Moons: Something Is About to Change 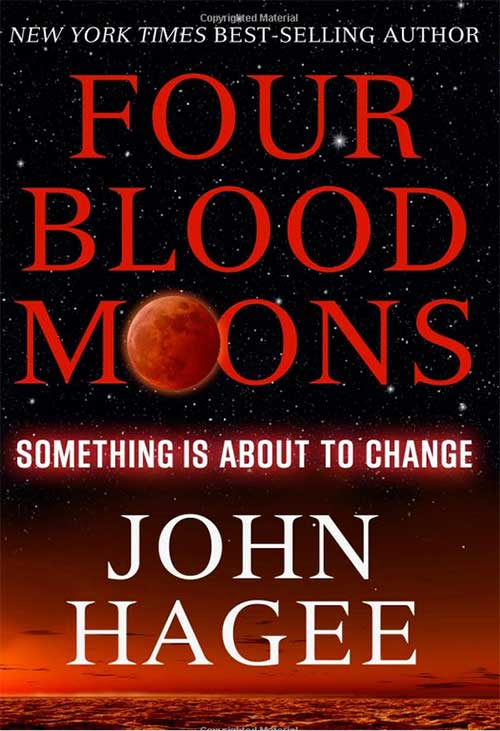 It is rare that Scripture, science, and history align with each other, yet the last three series of Four Blood Moons have done exactly that. Are these the “signs” that God refers to in His Word? If they are, what do they mean? What is their prophetic significance?

In this riveting book, New York Times best-selling author, Pastor John Hagee, explores the supernatural connection of certain celestial events to biblical prophecy—and to the future of God’s chosen people and to the nations of the world.

Just as in biblical times, God is controlling the sun, the moon, and the stars to send our generation a signal that something big is about to happen. The question is: Are we watching and listening to His message?

PS  A Trip Into the Supernatural – Demon Worship Documentary

8   Again, the devil taketh him up into an exceeding high mountain, and sheweth him all the kingdoms of the world, and the glory of them;
9   And saith unto him, All these things will I give thee, if thou wilt fall down and worship me.
10 Then saith Jesus unto him, Get thee hence, Satan: for it is written, Thou shalt worship the Lord thy God, and him only shalt thou serve.
11 Then the devil leaveth him, and, behold, angels came and ministered unto him.