The Electric Spirit of Pentecost

There are passages in the Bible, and perhaps other ancient records, that prove their authenticity by the very nature of their content. Following is an analysis of one of those passages.

In a more passive case, humans are susceptible instruments for the phenomenon of glow discharge—the luminous electrical effect appearing in proximity to a physical surface within an electric field. 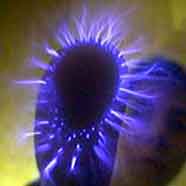 A person within an electric field distorts it so that the actual field at the surface of the head, arm, or knee may be stronger than the original field. “[For] a prolate spheroid [approximating the human body] the field at the top [head] is increased by a factor of 15.”

Thus, given the geometry of the human torso, immersion within some specific electromagnetic field might therefore even emblazon a person’s countenance, or perhaps give one the appearance of wearing a hood of fire.

Always accompanying such a discharge is a buzzing, crackling, or hissing sound. This “sound generated by . . . coronas can be heard by ear, and for power lines operating in the 500 kV to 1200 kV region that are situated near highly populated areas, the audible noise can be so severe that a change in the transmission line route is demanded.”

One can imagine the possible auditory effect of a corona just above or surrounding the ear. Like the field-induced pseudo-sound which might accompany it, it would seem to be everywhere. 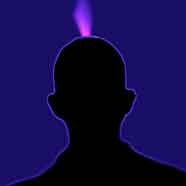 There is yet another noteworthy effect, to wit: Electrical stimulation of the [brain] can evoke vocalization, but such vocalizations do not constitute real words. This kind of vocalization has been described as inappropriate or garbled speech. Moreover, it is not necessary that the stimulation be a direct electrical application, inasmuch as ELF (Extremely Low Frequency) electromagnetic fields can have similar effects.  Presumably, such “speech” might sound to an untrained ear like another language—another tongue.

To experience simultaneously all of these effects (noise, fire, “tongues”) could prove to be overwhelming—or might it instead become an emotional high?

These observations make a provocative background for a rereading of the biblical account of the coming of the Holy Spirit on the Day of Pentecost:

And when the day of Pentecost was fully come, they were all with one accord in one place. And suddenly there came a sound from heaven as of a rushing mighty wind, and it filled all the house where they were sitting. And there appeared unto them cloven tongues like as of fire, and it sat upon each of them. And they were all filled with the Holy Ghost, and began to speak with other tongues, as the Spirit gave them utterance (Acts 2:1-4).

Whatever the nature might have been of the Cause for the apparent electrical activity underlying this passage, two millennia ago it was not known that these various effects were manifestations of a single phenomenon. A record of their association could have come only from experience. (Is there a “physical side” of a spirit?)

Above excerpt from MAN AND HIS PLANET – An Unauthorized History by James E. Strickling, Eloquent Books ISBN: 978-1-60693-099-1. Go to www.jimstrickling.com.