“Anyone who thinks that the Paris 4 Letters are a fraud or a forgery is simply not paying attention.”
[Jay Weidner, the author of ‘A Monument to the End of Time: Alchemy, Fulcanelli and the Great Cross’]”
—
I have approached several alchemists about the Forbidden Letters, and they all have been in favour of them; that what is being divulged in them is true. One said that the secrets of Alchemy are no longer secret. Simple as that.” [Gary Osborn, the author of ‘The Serpent Grail’]
—
“But do we really have to look at outer space to explain alchemical decapitation and chakra’s, and thereby life? Or could Alchemy indeed be terrestrial? We don’t know of course. But I have this hunch it is. That Mother Earth lives in more ways than is dreamt of in our philosophies.”[Hugo Dewasme in his article on the Forbidden Letters]
—
“Carl Jung guessed that the successful alchemist, ‘this most pure or most true man, must be no other than what he is, just as argentum putum is unalloyed silver. He must be (…) a man who knows and possesses everything human and must not be adulterated by any influence or admixture from without. This man will appear on earth only in the last days. (Mysterium Coniunctionis)’ – “[John Hume on the Forbidden Letters] 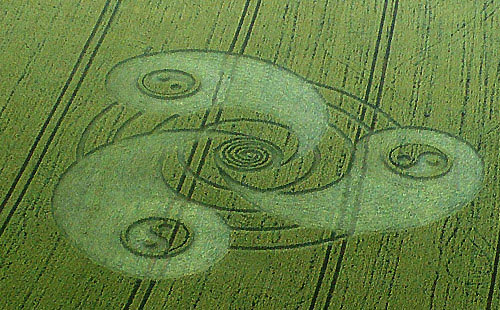 In the summer of 1997 the Frontier Sciences Foundation held a symposium on crop circles. At the end of that symposium a woman from the audience, Riet de Graaf, asked to be heard. She was allowed to speak and said she had ‘translated’ certain crop circles through paranormal abilities.

Her ‘translations’ seemd to point to the deified man of Alchemy. A man who is, according to the alchemists, to appear on earth at the End of Time. That man is said to be a natural man and a body of light at the same time. A man of overwhelming beauty too. The New Adam. Man deified. Man mortal (lead) turned into an immortal one (gold). A completely natural porocess, not needing a God.
‘The essence and aim of mysticism is union with God. Alchemy does not speak of this.'[Titus Burckhardt, 1967:25]’Since alchemy is performed by the Self and the Self is the only living God, we could say that alchemy is autotheistic.'[Jean Fenelon on the Forbidden Letters]’Alchemy is not about a union with God, it is about becoming God. God is but an aspect of the alchemist. In the words of the Corpus Hermeticum: “Man is a mortal God, and God an immortal man.” The union with God implies that God is ‘someone else,’ or ‘somewhere else.’ And no such notion is found in alchemy.'[John Raven on the Forbidden Letters/emphasis added]’Alchemy is neither theological, nor ethical; it looks on the play of the powers of the soul from a purely cosmological point of view.'[Titus Burckhardt, 1967:27/emphasis added]’In other words, alchemical cosmology is essentially a doctrine of being, an ontology.'[Ibid]’The human body is an alchemical body.'[David Gordon White]
And now let us listen to Riet de Graaf’s ‘translations’.

Again, Alchemy looks ‘on the play of the powers of the soul from a purely cosmological point.’ A play with ‘a happy end.’ It’s the universe itself that holds the secret. A universe that needs no creator-God. A universe that recently produced a smiley. At least seen from the Hubble telescope, meaning: from Mother Earth. 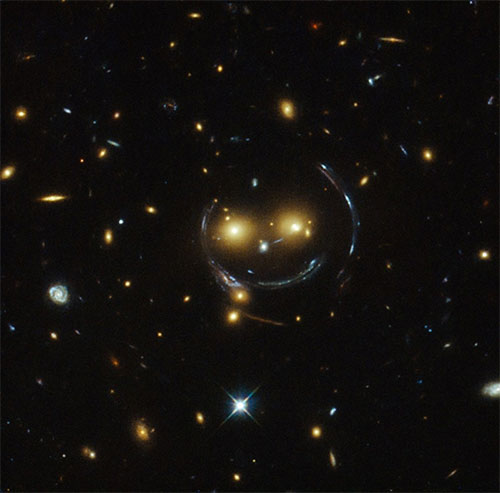